The Dallas Cowboys wide receiver group never fully unveiled itself in the 2020 season. Injuries along the offensive line and more importantly to the quarterback limited the impact of their dynamic wide receiver trio. Still, Amari Cooper, Michael Gallup, and CeeDee Lamb were able to have productive, if underwhelming seasons (as did many of the Dallas Cowboys).

As good as that trio is, the one thing they’re missing is a legit speed threat in the wide receiver group.

Now, Cooper, Gallup, and Lamb are more than capable of winning downfield. However, they lack a speed element that threatens defense down the field.

That’s what is so intriguing about De’Vonta Smith and Jaylen Waddle. Two guys with blazing speed that can take the top off of the defense. It’s an aspect missing from Kellen Moore’s vertical passing offense.

A player like Anthony Schwartz of Auburn could add an element that the Cowboys don’t have in their offense. Schwartz ran a 4.26 at his pro day. If he would have been able to run at the combine and pull that that off, it would be the third fastest 40-time ever. Schwartz had 54 receptions for 636 yards and three touchdowns. Not great production but the Auburn passing attack wasn’t the most dynamic in college football.

The speed to threaten defenses down the field would open things up a little bit more in the short and intermediate passing game for the Cowboys. Schwartz can provide that. His speed could see him go as high as the second round, but it’s likely that he could be available for one of their third or fourth round picks.

As it stands, the Cowboys still have one of the best receiving groups in the NFL, if not the best. Yet, there’s an element missing that could help take their offense to another level. Adding the kind of speed that Schwartz brings to the NFL would unlock an element of the Dallas Cowboys passing game that we haven’t seen yet.

None of the Boys receivers were ranked in the top 20. Both Gallop and Cooper were in the top, that is worst, for drops.
Cooper folds when put against press coverage.
Ceedee has great promise but had rookie drops issues .
So, let’s put the hype down.
The Boys receivers are good but not in the top groups of the league.

And you factor in that Gallup will probably be gone after this year , we’re not as set at WR as everyone makes us out to be

Siempre44, you dnt think they would hv bn had Dak stayed healthy all season?? They were putting up monster numbers as a trio. If they could add speed late in the draft or as an UDFA than we could see this offense really take off

The Boyz can only go as far as the BIG Boyz can go. Let’s get SOLID up front !!!

All 3 are 1000 td receivers. Amati folds against press? How many teams can say they have 3 1000 yd receivers and their backup tight end who was the blocking TE was forced into playing and had over 60 catches and over 600 yds receiving . And all of them with no rapport with the QB because there were 3 of them oh and with a new system. So maybe none of them are the best receiver in football but tell me how many teams would pray to have that. And also tell me teams that have a better trio?

It’s true, speed kills, but speed alone at WR is worthless without being able to run crisp routes and actually catch. Al Davis spent a ton of draft picks on sprinters who were awful receivers. Dallas had Doug Donelly (white lightning) and Alexander Wright (Ace) on their rosters for years and neither one could catch a cold. Nice nicknames though LOL. Speaking of speed, Dallas would be better off packaging that 3rd or 4th round pick to move up in the 1st to grab Pitts. 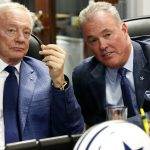 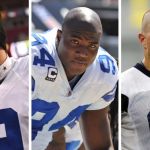