Most of them were backups, but it’s safe to say the Cowboys’ cornerbacks didn’t have the best time against the Denver Broncos.

There were some positives but a lot of negatives. It’s preseason, of course, but we’d be without content if we didn’t overreact.

So with that being said, here are three cornerbacks I want to highlight from Dallas’ first preseason game.

Joseph had an up-and-down game on Saturday.

Joseph looked good in coverage early on but had some negative plays afterward. Seth Williams caught a touchdown on him for the opening score, and you can look at that from two perspectives. While Williams made a phenomenal play, Joseph could've done better to prevent himself from being completely shielded from the ball.

Joseph was one of many Cowboys to commit a penalty as well, jumping offsides to wipe away a Broncos missed field goal before halftime.

He’s got a high ceiling, but Joseph has been very inconsistent. It showed against the Broncos.

While Joseph had some bright spots, the same cannot be said for Wright.

He had a penalty in the first quarter that negated his own interception and gave up multiple big plays after that. Brandon Johnson beat him deep for a 40-yard catch, and Kendall Hinton caught a 24-yard pass on Wright for Denver’s second score.

He was a project guy when he was drafted, but it doesn't seem like he's improved that much. From what we’ve heard, Wright has had a good training camp. But that didn’t show on Saturday.

Bland might’ve been the Cowboys’ best cornerback against the Broncos.

The rookie out of Fresno State flashed his physicality and instincts on Saturday. He blew up a screen pass on Denver’s first drive and was very active throughout the game.

Bland was flying all over the field and looked outstanding. He was sharp, saw the field well and never made any false steps or hesitations. Wherever he played, Bland was on it.

He may not play too much in the regular season, but Bland proved he can provide depth at cornerback. He’s looking like an excellent selection for the Cowboys.

Student at the University of Oklahoma. Reporter for OU Daily. Junior Writer for Inside The Star. Contributor for Guns Up Nation.

Bland has a chance. As for the person that wanted Wright…that was a fireable offense from the start with using a 3rd round pick. He really wasn’t a draftable player. I said it from the moment he was drafted. I may miss some but this was no doubt. Just as people questioned when I said Taco Charlton was a 4th round pick at best. As for Wright, he was even horrible on special teams last year. Twice costing the team by not even understanding the rules. If he makes this team it says alot about the roster and the staff.

You are jet on my brother, last year he didn’t show anything.

Both touchdown passed was on # 25

Quandre Mosely looked better than Wright and KJ. Maybe it was the lower level competition he faced, but he at least looked like he belonged.

Kyron Brown didn’t look horrible either, but he also limped off after something happened to his lower leg (looked like he was grabbing at his calf).

I don’t know why the Cowboys keep taking guys like KJ. He made bad choices in college, & he continues to in the NFL- on & off the field. Cost us 9 points on Saturday. They had no business picking Wright in the third last year. Both will be gone by next year.

There’s three people to blame for guys like Kelvin Joseph and Nashon Wright being in Dallas. Jerry Jones, Idiotic Stephen Jones, and Mike’s McCarthy for nor speaking g up and getting their asses run out of town. The Jones Family IS NOT SMART about NFL Football. It shows year after year. Micah Parsons was a lucky mistake, only because Patrick Surtain was drafted by Denver. That left Parsons ( The Defensive Rookie Of The Year) for Dallas. Until Jerry is out of the picture and Stephen admits his incompetence, the Cowboys incredible talent will be wasted year after year!!!

Not disagreeing, with Joseph being a known “character issue” guy (and has screwed up even more since) and Wright was probably a bad reach. And they got very lucky with MP. But I do find it somewhat amusing how when these possible bad draft choices are mentioned, JJ, SJ and MM are the stupid ones, but no mention of the “draft guru”, Will McClay. McClay seems to get a lot of credit for perceived good draft picks but gets passes on the clunkers.

BTW, SJ made probably the single best pick in recent history, resulting in maybe the best player on the team now, with his insistence of Zack Martin over Manziel. Give credit to longtime scout Walter Juliff there also. 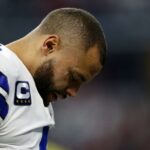 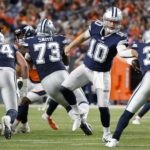