It's no secret that the number 88 is revered within the Dallas Cowboys organization. Drew Pearson first made it famous in the '70s and was followed by three-time Super Bowl champion and Hall of Famer Michael Irvin in the '90s. This coming Tuesday, another iconic receiver that dawned the same number will be the Cowboys opponent, Dez Bryant.

Bryant spent eight seasons with the team and was highly productive. He was selected to three Pro Bowls, named an All-Pro, and left the team as its all-time leader in receiving touchdowns with 73. On Saturday, Bryant spoke to the media about what it's going to be like facing his old team on Tuesday.

“It's cool. I'm excited. I'm looking forward to it,” Bryant said. “A lot of those guys on that team, I know and I'm real good friends with. I think when we line up across from one another, it's going to be fun. It's going to be an exciting moment.”

Bryant was drafted 24th overall in the 2010 NFL Draft. After a solid 561 yards as a second option to Miles Austin as a rookie, Bryant began his take over as the Cowboy's number one target with nearly 1,000 yards in 2011. The next three seasons would see Bryant put his name on a shortlist of the best receivers in the league. He hauled in at least 88 receptions and 1,200 yards in each, including a league-high 16 touchdowns in 2014.

After that magical season, Bryant was rewarded with a five-year, $70 million dollar deal with $45 million in guarantees, however, it would also start the end of his time in Dallas. Bryant suffered a fracture in his foot in 2015 that forced him to miss seven games, and a hairline fracture in his knee took him out of three games the following season. 2017 was the third consecutive season under 1,000 yards and he was released in April of 2018.

Immediately after Bryant and the Cowboys parted ways, he put out a tweet saying “it's very personal” between himself and the organization. Fast forward over two years later, it appears time has started to heal some of those old wounds.

Bryant and team owner Jerry Jones have always had a very close relationship and it's continued even after the two sides went their separate ways a few years ago. Jones said on 105.3 The Fan earlier this week that he was happy for Bryant getting another shot in the NFL, but also admitted that he was “a little worried” due to Bryant's ability to jump and bring down passes.

His former receiver had nothing but praise for him on Saturday and thanked him for giving him a shot in the NFL.

“He's very passionate; I'm very passionate,” Bryant said. “I think that's why our relationship clicked the way that it clicked. One thing I will always have for Mr. Jones is respect. I'm thankful that he drafted me and gave me an opportunity to play for this franchise. I'm a Texas boy. I grew up a Cowboy fan. I'm thankful for that. But I'm here. I'm excited to be a Baltimore Raven. I'm looking forward to going up against those guys.” 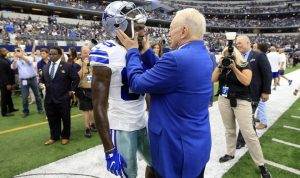 The Cowboys have a new 88 in the building these days in the form of rookie sensation CeeDee Lamb. He ranks third in receiving yards (650) and fourth in touchdowns (4) for all rookies, ranking second and first in those categories for the Cowboys this season. The young stud expressed his feelings on facing Bryant earlier this week.

“For me to go against a guy I actually watched growing up excel in this jersey number, to have the opportunity to play against him, is a huge honor on my end and speaks volumes on his part,” Lamb said. “He definitely did a great job here, and I’m looking to continue the legacy with the jersey number.”

Bryant left a legacy in Dallas that will last a lifetime, which makes Tuesday's Cowboys-Ravens showdown one to keep an eye on. Will Bryant “Throw Up The X” against his former team and get some sort of retribution? Or will the Cowboys pick up a much-needed victory to keep pace in the NFC East? We'll all be watching that's for sure.

Matthew Lenixhttps://mlenixsctx.wordpress.com/
I write dope stuff about the Dallas Cowboys and what not.
Previous article
Cowboys S Donovan Wilson Still Hurt, “Questionable” for Ravens
Next article
#DALvsBAL: Will Dez Bryant Take Flight or Have his Ravens Wings Clipped?