A rumor's been circling since yesterday that Wide Receiver Jalen Tolbert, Dallas' 3rd-round pick last April, may not dress for tonight's season opener. While it would be disappointing after all the offseason hype, it's far from a reason to lose faith in the rookie as a long-term asset for the Cowboys.

It wasn't long ago that receivers taken anywhere outside of the front half of the 1st round weren't expected to contribute much in the first season or two. The conversion from college to NFL offenses, between game speed and playbook complexity, was generally harder on them than other positions.

This has been somewhat mitigated with evolutions in both college and professional football; the two have leaned into each other over time and now there's less of a learning curve. But still, plenty of players aren't pro-ready for Week One of their rookie season.

Tolbert wasn't an elite prospect like CeeDee Lamb. He was taken near the end of Day 2, 88th overall, and deserves the chance to grow into his role like most 3rd-rounders.

The Cowboys' decision to trade Amari Cooper away and re-sign Michael Gallup, knowing he might miss some early regular-season games, unfairly sped up the expectations for Jalen Tolbert to contribute. It didn't help that he was immediately lauded as a draft-day steal and praised heavily throughout summer practices.

At one point, the idea that Dallas wouldn't even miss Cooper because we now have Tolbert was floated around by some. Clearly, this hype train went off the rails.

I have heard that he might not. Lamb gave a lot of praise to Simi and Noah as being ready. Turpin will dress so it’s down to him or Houston. https://t.co/oPCLYnJLtb

As was alluded to by Bryan Broaddus, Tolbert might not suit up for tonight's game against Tampa Bay. The Cowboys may instead go with 6th-year veteran Noah Brown, 2nd-year prospect Simi Fehoko, and special teams wunderkind KaVonate Turpin. With Tony Pollard also in the mix for extra touches, it's not hard to see where Tolbert might get phased out of the plan.

Sure, Brown's been around a long time and never contributed much on offense. But he's had six years to build familiarity with Dak Prescott and this offense, compared to just over four months for Tolbert. And it's been Noah, not Jalen, who's received a lot of praise since the pads came on in Oxnard.

Fehoko may have only been a 5th-round pick last year but he's got a full year of NFL coaching under his belt. That matters more than we might think, and especially if the talent gap isn't as wide as draft status often falsely suggests.

Finding more ways to get the ball in Turpin's hands only makes sense after what we saw in August. He has elite speed and RAC ability. As long as KaVontate is more than a returner, his potential to be a game-changer is higher right now than Tolbert's. Don't forget that Turpin also has professional experience from various leagues, including being the USFL MVP earlier this year.

Again, this is only speculative. Jalen Tolbert may very well suit up tonight. He might even start. But if he doesn't, terms like “wasted pick” and “bust” need to be kept out of our mouths. There are very reasonable arguments for why he might not be as ready for the Bucs as guys who have experience on their side.

He didn’t look ready at all and had some bad drops. I’d rather dress all three TE’s over him. Fehoko hasn’t been consistent either, with bad drops and mistakes. I really wish they’d give Brandon Smith a chance. He’s come up big more often than not when he’s been allowed on the field.

Kellen Moore’s play calling SUCKS!!!! Why is this asshole still in Dallas??? 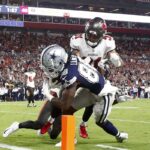 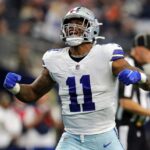