Familiar Faces Remain in the Fold for Cowboys Mock Drafts

Results from the NFL Scouting Combine have not yet factored into mock drafts, with testing wrapping up from Indianapolis on Monday. Our latest installment of this mock draft summary continues to bring some familiar prospects to Dallas, strengthening the case for these players to remain where they are projected post-Combine.

Let's take another look at where the media sees the Cowboys upgrading in the first round of the 2018 NFL Draft.

“A relatively poor combine sinks Ridley slightly, but the Cowboys are happy to pick him to pair with Dez Bryant to stretch defenses vertically in 2018 and beyond.”

A 23-year old WR prospect with underwhelming stature, Calvin Ridley's draft stock as the top receiver in this class has come into question.

If you choose to trust Ridley's tape out of Alabama, which I have in grading him as WR1, this is a player the Dallas Cowboys can't pass on. In a deep class of receivers, the Cowboys could significantly upgrade their vertical passing game at 19th overall with Ridley. 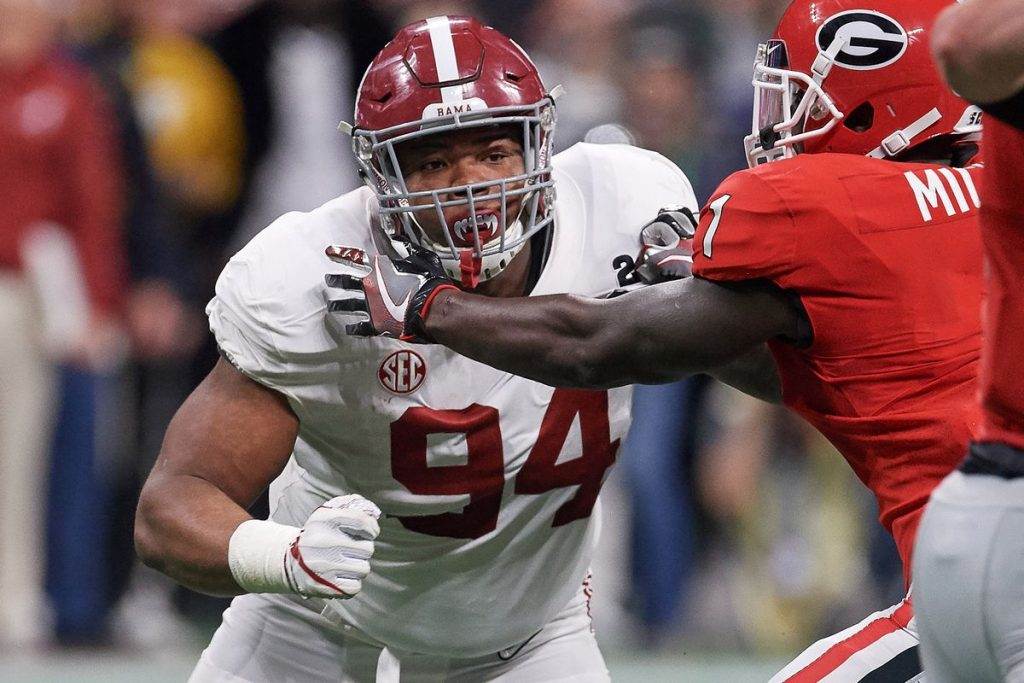 “The Cowboys' defensive line was a disaster last season. Payne is a step in the right direction to turning it around.”

Living in the heart of New York Giants territory, it is always interesting to see local opinions on the Dallas Cowboys – particularly when it comes to the NFL Draft. Calling this team's defensive line a “disaster” is laughable, but Payne does fill a need on this front with the ability to play both interior positions.

Evaluating individual Alabama defenders can be difficult, with so much NFL talent coming together to dominate college football on a yearly basis. When asked to play the unheralded 1T position though, Payne created opportunities for his teammates to make plays thanks to his upper body strength and above average movement ability.

Payne also showed the ability to put all of these traits together as a pass rusher, beating guards with a good first step and exceptional pad level.

“Hurst-to-Dallas feels like one of the cleanest fits in this mock. Rod Marinelli wants more rush from the interior, and Hurst fits his scheme and style.”

Following the NFL Combine, “clean” will unfortunately not be a word used to describe Maurice Hurst's projection in this 2018 Draft. The Cowboys may be the most affected by the news that Hurst was diagnosed with a heart condition during his all-important medicals, with the majority of mock drafts having Dallas double up on Michigan defensive linemen.

There is no doubt that Hurst would upgrade the Cowboys' ability to generate pressure in quarterback's faces, but the stock on this year's top 3T DT is still unknown until further testing.

This is the third time in four weeks that Maurice Hurst find himself in this mock draft summary, with Calvin Ridley also making his second appearance.

Hurst's presence here is the most likely thing to change in post-Combine mock drafts, while monitoring how far Calvin Ridley could slide will remain crucial for the Cowboys.

Courtland Sutton and James Washington are two other WRs that have been projected to Dallas, meaning the Cowboys don't have to be all-in on Ridley – or even a receiver with their first pick.

With these mock drafts also serving as an outlook on the NFL before free agency, my biggest takeaway this week is that the Cowboys should be exactly where they want to be come draft night – in position to upgrade at any position without a glaring team need.

Those are good wr prospects but the guy yall dont talk about is Christian Kirk from Texas A&M. He had a great combine but will not be available in the 2nd round. I wouldn’t be mad if they bring him in

Kirk is damn good but we don’t need any more diminutive WO’s. Don’t get me wrong I like the guy but if we are drafting a receiver in the first than our FO has failed us.

Give me Moore who I think will be gone or St. Brown from ND.

Oh yeah, I wish our DC valued the 1 tech more. Vea would fit our D perfectly and would keep our LB’s clean allowing them to make plays,

Right there with you, Vea is my only first round DT at the moment. Would be a great pick. As I said below too, I’m also not drafting Kirk in the first round. Struggles too much to win on the outside. I like the player, and will gladly let him excel somewhere else.

I like both Moore and Kirk. I’m afraid both will be gone unless Dallas trades up. Watch for these two WR’s…both will be later picks and one will probably go undrafted. Daurice Fountain, probably will go fourth or fifth round. Steven Dunbar III will in all likelihood go undrafted but if he gets the chance some team will get a good solid WR……..I think.

Thank you for the names to look into, and for your comment! I highly doubt that both Moore and Kirk are gone before pick #19, but I wouldn’t draft Kirk in the first round either. For me, it is either Ridley or Moore in the first round – or this team waits to take a WR, which is perfectly fine given the depth of this year’s class.