A career in the NFL is impressive enough, but with the average career span being only 3 and a half seasons, it stands to reason that there are plenty of NFL players who've gone on to have interesting second jobs. Some of them began during their time on the field, some a long way into retirement, there might even be some to come from the most recent draft.

We've rounded up the most fascinating and impressive second careers of NFL players so that you can be a little nosey.

Although Richard Seymour doesn't play in the NFL anymore, he began his second passion during his time playing for the Oakland Raiders.

Since retiring he's had more time to focus on this second passion, poker. He made it to the WSOP in 2019 and the statistics show that he didn't do badly at all! It could be because of the strategy involved in poker that he made the change so seamlessly, after all, he's in good company.

There are a surprising number of NFL players who go on to find success at the poker table.

Martellus Bennett had a glittering career in the NFL. He played for an impressive ten years and achieved a Super Bowl victory right at the end of his career in 2017. Sometimes knowing to quit when you're ahead is a real virtue and having been one of the most successful tight ends in the league and having that perfect career end with the Super Bowl victory, Martellus Bennett called it quits with the NFL.

Since then he totally refocused his career and started a production company called The Imagination Agency. They publish books, apps, television series, toys, and even a clothing line. From time to time the agency even throws themed parties.

It's a far cry from the NFL, but it looks like he's having just as much success, and possibly even more fun.

There are some people who just have athleticism running through their veins and Tim Tebow is one of them.

His NFL career ended a while ago and he made a pretty standard career move into sports broadcasting. However, it turned out that broadcasting just wasn't enough of a physical challenge for Tebow, so he made a change.

Back in September 2016, Tebow signed a contract to play baseball for the New York Mets. Whilst it won't be for quite the same salary as he was used to in the NFL, Tebow is slowly but surely climbing the ranks. He's moved from Class A to Double-A, so he's only one more step to go until he's out of the minors.

Any sports career is impressive, but two, with a long break in the middle, is really quite extraordinary.

Alex Karras certainly had a natural talent for football. He made it into the College Football Hall of Fame after his success in Iowa and was shortly signed by the Detroit Lions. He had a great time with this team, so good in fact, that he never left.

He played his whole career with the lions as a defensive lineman. After retiring from the NFL he'd gained notoriety as a great player and something of a celebrity, which helped to catapult him into his next career as an actor.

He won a place on television shows like Match Game and Webster, but his most famous role was as Mongo in ‘Blazing Saddles'. If you've not seen the film, then it's worth it for Karras' performance alone, the most infamous part being where he punches a horse.

Whilst all of the other players on the list are the most famous for their NFL career, Terry Crews made such a good job of carving out a second career that he's undoubtedly more famous for that.

The actor played no less than 32 NFL games, but most of us know him for his time on Brooklyn Nine-Nine. Hilarious as he is, Crews still looks every inch the football player, years after his retirement. 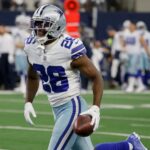