The Cowboys' missing stars may have finally caught up with them. Shorthanded and showing it, Dallas is struggling to function in Kansas City and trails the Chiefs 16-3 at halftime.

With WR Amari Cooper out on the COVID list and injured OT Tyron Smith surprisingly not playing after reports all week that he would, Dallas' offense has been unable to get much going. Dak Prescott had just 68 passing yards and has been sacked three times already, with some key throws being dropped by the backup receivers.

Meanwhile, the Chiefs have had little trouble moving the ball when they've had it. Tyreek Hill has a 33-yard run on a reverse plus another 49 yards receiving. KC has scored twice on short runs by Clyde Edwards-Helaire and Travis Kelce, plus had a field goal.

It looked like Dallas might have a big momentum swing when Micah Parsons strip-sacked Pat Mahomes late in the second quarter and Tarell Basham recovered it. But a few plays later, Prescott threw it up to CeeDee Lamb near the endzone and got picked off by former Cowboy Charvarius Ward.

While the Chiefs are a much more respectable opponent than the Broncos, this first half was very reminiscent of what we saw two weeks ago against Denver. Will the Cowboys respond better in the second half this time, or is this afternoon about to get a lot longer?

Top two receivers sitting on the bench and the Boys abandon the run game. I am sick of the empty backfield formation. You cannot communicate to a D like KC that there is no threat to run. Horrible game plan by boy wonder Moore. What a joke. 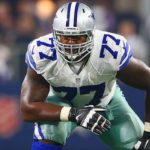 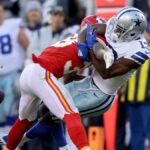