The Dallas Cowboys received both good and bad news today after their loss in New Orleans. Let's start with the former, according to ESPN's Todd Archer, All-Pro Left Tackle Tyron Smith's high ankle sprain isn't as severe as originally thought.

The Cowboys received a bit of good news Monday on the injury suffered by Pro Bowl left tackle Tyron Smith. While it is a high right ankle sprain, it does not appear as severe as initially was thought after the loss to the New Orleans Saints, according… https://t.co/orBd4Lk8Ur

On the final drive of last night's game, Dak Prescott was sacked deep in the Cowboy's own territory, and unfortunately, he got pushed right into the right ankle of Smith. The normal recovery time is 4-6 weeks for a high ankle sprain but after his MRI on Monday he'll be monitored on a week to week basis. He's been ruled out against the Green Bay Packers this Sunday but this is definitely good news to hear. 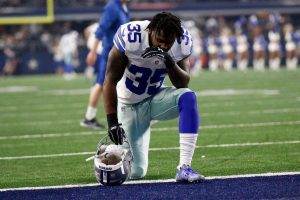 Unfortunately, for Kavon Frazier the news today wasn't so great. According to Patrik Walker of CBS Sports, he will need surgery to repair the torn pectoral muscle he suffered in New Orleans, likely ending his season. Frazier is arguably the Cowboy's best special team player to go along with being a solid backup at the safety position. Now, look for rookie Safety Donovan Wilson to get an opportunity to build on his stellar preseason that included 3 interceptions.

You have to take the good with the bad in these situations. The Cowboys have lost a valuable special teams player/backup safety but won't be without their All-Pro tackle for as long as they thought. They have to lick their wounds and be ready for another big test against the Packers in Arlington on Sunday.