There's no player in football that is more hotly debated at the moment than Dallas Cowboys Running Back Ezekiel Elliott. Though much of the debate surrounds his potential contract extension, which would likely make him the highest-paid running back in the NFL, there's also been a lot of debate about his standing as the best running back in the NFL.

On Thursday, Bleacher Report's Kristopher Knox released his list of the most dominant players at each position. It's a fantastic read and not just because he listed Ezekiel Elliott as the most dominant running back in the NFL.

It's certainly easy to see where he's coming from despite the debate that rages across the NFL's fanbases. Ezekiel Elliott's lead the NFL in rushing two of the three season's he's been in the league. Both of those seasons, Elliott only played 15 games, getting the benefit of the Cowboys playoff positioning being solidified prior to week 17. In 2017, he would have probably ran away with the league's rushing title again, which would make him the three-time defending rushing champion heading into 2019.

In that 2017 season when he missed six games and had a game against the Denver Broncos where he only rushed for seven yards on nine carries, Elliott still finished in the top 10 in rushing.

In 2018, he bested Saquon Bakley by 127 yards rushing. Had Elliott played in the week 17 finale last season and rushed for his season average, he would have won the rushing title by more than 200 yards. And he did that in what many considered to be a down season for Ezekiel Elliott and the Dallas Cowboys rushing attack. Pro Football Focus even graded Elliott as the 30th best running back for 2018.

No disrespect to Todd Gurley, Saquon Barkley, Alvin Kamara, Le'Veon Bell, or Chrisitan McCaffrey, but they don't have the credentials that Ezekiel Elliott brings to the table. Those guys are great running backs in their own right, but Elliott has lead the NFL in rushing in two of the three seasons he's been in the league and would have probably lead the league in 2017 had he not been suspended.

Elliott's 3.4 receptions per game through the first three seasons of his career is only slightly better than Todd Gurley who ranks sixth among this group of players. The Dallas Cowboys attempted to get Elliott more involved in 2018 but didn't work him downfield enough in his targets for him to be anything more than a dump-off option. In 2019, the Dallas Cowboys should work to get him running more intermediate routes in the passing game because as we saw in the Detroit game last season, Elliott's got really good hands.

Historically, Elliott is off to a great start to his career. His first three years in the NFL compare quite favorably to two Hall of Famers and one of the most dynamic running backs of the early 21st century.

No player with more than 100 career attempts in the NFL has averaged more rushing yards per game than Ezekiel Elliott.

Think about that for a second. Through his first three seasons, he's averaged more rushing yards per game than Emmitt Smith, Barry Sanders, Terrell Davis, Eric Dickerson, Adrian Peterson, Tony Dorsett, Walter Payton, and the list goes on and on.

If you look at what he's done compared to other players during their first three years. Only Eric Dickerson, Earl Campbell, and Edgerrin James averaged more rushing yards per game than Ezekiel Elliott in the first three seasons of their respective careers.

One of the things that people have used to knock Ezekiel Elliott has been the volume of carries that he's received, but there's a reason that the Dallas Cowboys lean on him so heavily. They've created a run-first identity and though at times it has made the offense somewhat inefficient, it's not because the player they're handing to is not a good player, but because every team in the NFL is expecting the Dallas Cowboys to run the football with Ezekiel Elliott.

In 2018 in particular, the Cowboys offensive coaching staff, namely the departed Scott Linehan, didn't do enough to create favorable matchups in the running game. Too often it was a first down run out of heavy personnel that the defense was expecting.

With two rushing titles already in the bag, there's no reason to expect anything different from Ezekiel Elliott in 2019. It's anticipated that the offensive gameplan and execution will be better in 2019 than it was in 2018. The offensive line will be better and with Kellen Moore as the offensive coordinator, there's a thought that the Dallas Cowboys are going to be less predictable moving forward.

The debate will continue to rage over the value of extending Ezekiel Elliott with a contract that will carry him to his age 28 or 29 season, but there is no debating that Ezekiel Elliott is the best and most dominant running back in the NFL. 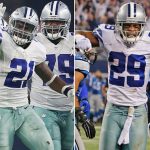 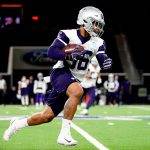