Is Prescott Looking For More Than a Simple Extension?

A week after Carson Wentz signed a contract extension with the Philadelphia Eagles, Dak Prescott and the Dallas Cowboys are still negotiating the terms that will lock up the franchise quarterback for the long-term future. According to a recent report from the Forth Worth Star-Telegram, Prescott's agents have asked for a deal of approximately $34M per year. A big, yet unsurprising sum. But is there something else Prescott is asking for, beyond an extension?

There are many things to consider on a contract beyond mere average money earned per year, but it only makes sense for Prescott to get a similar deal to Wentz's. After all, they both entered the league in 2016 and have proven to be capable of leading their teams. The debate between the two will prevail for a long time, and I assure you we won't be able to figure out who's the best one anytime soon.

However, there's one big thing that separates the two signal-callers. Carson Wentz was the second overall pick in the 2016 NFL Draft. Dak Prescott was selected 133 picks later, late in the fourth round. Why is this so important three years later?

Well, while Dak Prescott earned two million in his first three seasons in the NFL, Carson Wentz earned $28.58M, per Over The Cap. On top of that, prior to the extension, Wentz had a fifth-year option to play 2020 for almost 23 million dollars. 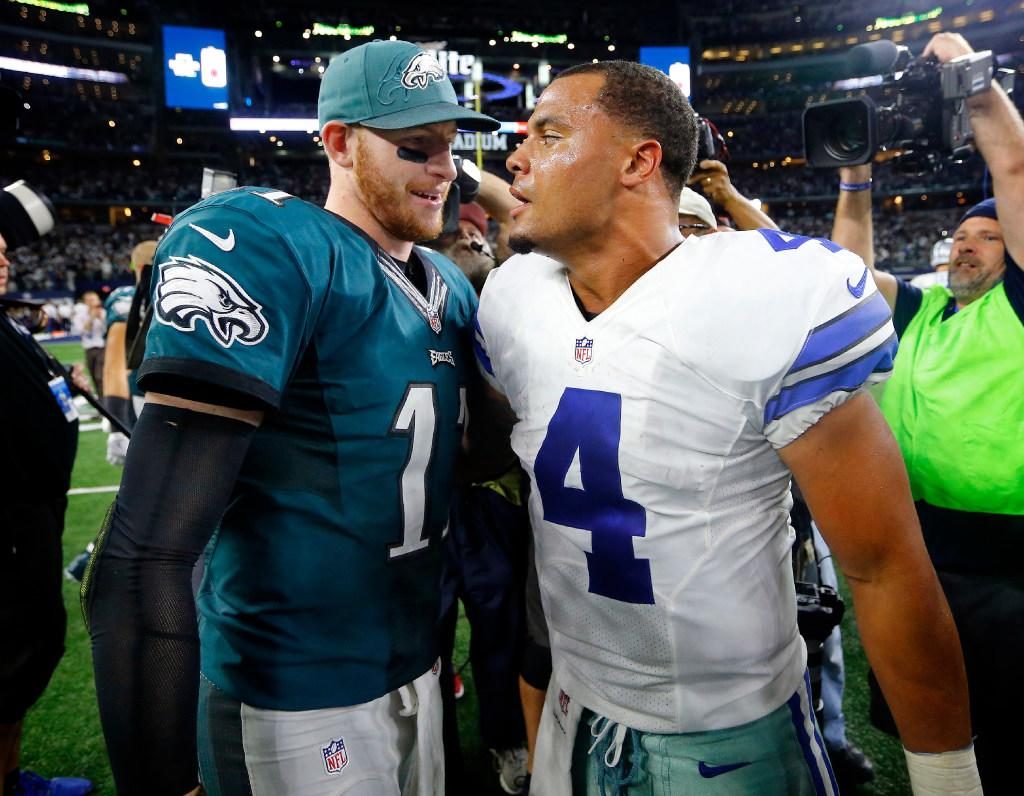 One thing is clear. On their first three years as professional football players, Prescott has received way less compensation than Wentz has. Also worth noting is that Dak hasn't missed a single game unlike the Eagles QB, who has missed eight. Half a season worth of playing time.

That's definitely going to play a role on the negotiations. Not only could the Cowboys QB ask for enough compensation in the future, but he could also ask for a completely new deal. With a year remaining on his rookie deal, his representatives could be asking for completely new terms for the upcoming season and beyond. After all, what he would earn in 2019 would be way less than deserved. It would make sense for his party to lobby for a completely new deal instead of a simple extension for life after next season.

Many things could be complicating talks between Prescott's team and the Cowboys' front office and I wouldn't be surprised to see this one being one of the most important ones. We know he's getting paid, but how much will he receive for the 2019 season after being the most underpaid QB in the NFL for the past three years?

Mauricio Rodriguezhttps://www.facebook.com/PrimeroCowboys/
I love to write, I love football and I love the Dallas Cowboys. I've been rooting for America's team all the way from Mexico ever since I can remember. If you want to talk football, I'm in... You'll find me at @MauNFL.
Previous article
Iron Sharpens Iron, Robert Quinn vs. Tyron Smith a Battle Worth Watching
Next article
Cowboys en Español: ¿Es Quinn Una Mejora Sobre Gregory?

This idea really doesn’t make sense. There is a long history of draft position disparity whereby a player drafted in later rounds is superior or equal to a player drafted in the first round; albeit both players are excellent players. I havent done any research on 2nd contracts for these scenarios but I dont recall any time where a player is looking to recoup money he felt he lost in the past relative to a peer simply because of where he was drafted. You dont get to be redrafted and compensated for your new “draft slot.” You can only be compensated for your performance at present and value to the club today and moving forward without retroactive compensation. Dak was drafted in the 4th because that is where the league saw him. It’s our good fortune that he has performed like a first rounder but not a reason to throw retroactive phantom money to him.

Dak has proven on multiple occasions that with out star power around him, he’s lucky if he is average at best. What do you think is going to happen when he takes the big contract and they no longer have the means to keep him surrounded by superstars? We will end up with a mediocre quarterback on a mediocre team. Great quarterbacks elevate the play of those around them, while he has proven, that great players elevate him.

The question should be “ How much should Prescott give back for bring the most overrated QB in the NFL” and should the Cowboys even sign him at all?

Lol. It wud be nice if we cud get a better qb but it’s none out there. He better just ball out bc he’s going to get paid. I’m just praying he improves his accuracy, pocket awareness, and anticipation. Go cowboys