Last May, the future Hall of Famer retired after 15 years in Dallas for the broadcast booth on ESPN's Monday Night Football. Following the footsteps of former teammate Tony Romo, but with nowhere near the amount of success. Realizing he wasn't exactly stellar on television, and still having the fire in his belly to compete, Jason Witten couldn't stay away. In February he got the call from the organization and decided to return for year 16.

If the Cowboys hadn't called Witten, would he have played anywhere else? He gave ESPN's Todd Archer some insight into his thinking on that matter. “I was fortunate enough to have this opportunity. I don't know that I can answer that if this opportunity wasn't there. Would I think about it? I don't know that I could've seen myself wearing another uniform, but I was pretty adamant that I was ready to get back in there in play, ” Witten said.

Plenty of people on the outside think this spells doom for the progression of Blake Jarwin and Dalton Schultz, but that's not necessarily the case. Athletes are naturally competitive and being pushed, especially by someone in the same room, can be a great thing. Witten has the mindset of making things interesting at tight end.

“There's a lot of questions out there about me, too, and I'm anxious to prove that I can play. But also know that may not include every play and every snap. Certainly, that's been talked about. The team will make those decisions. Those coaches work long hours, and they're smart. Obviously, I've got a lot of respect for Jason Garrett and the program that he's built here and who he is as a man and as a coach. That will all work itself. I can't worry about how that plays out. My job is kind of making it tough on them. We all benefit if that's the case, ” Witten said.

Not exactly a guy who's planning to be on the sidelines wouldn't you say? Jarwin and Schultz combined didn't produce in 2018 what Witten did in 2017. Being the big dog in the room, and coming off a year of rest on a body that got beat up for 15 years, the Cowboys legend has all the incentive to put his name back at the top of the tight end depth chart.

Witten is surprisingly slimmer and faster than he was in 2017 according to people in the building. Truly amazing when you consider he took an entire year off from the gridiron. At 37, being in better shape than you were two years prior, is a testament to what the future Canton, Ohio resident is all about.

If you think Witten is simply back for a farewell tour, you may be wrong about that as well. “Every football player wants to win. And certainly, when making a decision like this, I'm envisioning holding Lombardi trophies and competing for championships,” Witten said via Mike Leslie of WFAA channel 8 in Dallas.

“Trophies” and “Championships”, that sounds like a guy with plans on being a Cowboy past 2019.

The Cowboys all-time leader in receptions, yards, and games played is back, and not just to be some guy. He's called this current roster the most talented he will have the pleasure of playing with. Now with one of the franchises greatest players back in the fold, and motivated to win, the upcoming season is setting up to be very special in Big D. 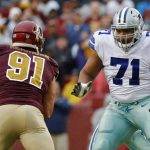 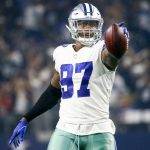