When Dallas Cowboys legend Jason Witten retired from the NFL last month, he left behind an unproven group of tight ends for the Cowboys to field as Witten moves on to the Monday Night Football broadcast booth. This is not a TE group short of potential, although that's nothing new for the laundry list of players that have failed at the position behind the Hall of Fame bound Witten.

Headlining this group of potential heirs to Witten has to be 2016 draft pick Rico Gathers. Not yet given the same opportunities that Geoff Swaim and Blake Jarwin are receiving through the Cowboys ongoing mini camp, Gathers has been criticized for his commitment to his team.

Looking to make the transition from the basketball court at Baylor to the football field, Gathers' journey began at Witten's soon-to-be home forever. Playing his first organized football game since middle school, Gathers and Witten were teammates in the Hall of Fame game at Canton, Ohio in 2017.

A game rarely leaving fans with a lasting memories, Gathers immediately flashed potential in the passing game, hauling in three passes for 59 yards and a touchdown. Gathers would go on to spend the season on IR after a concussion suffered in practice, recovering from it in time to return but never seeing the field.

This leaves Gathers' prospects of putting it all together in year three at a difficult crossroads. It will be hard to question Gathers' commitment moving forward, as the message from his former teammate Jason Witten still lives with him. 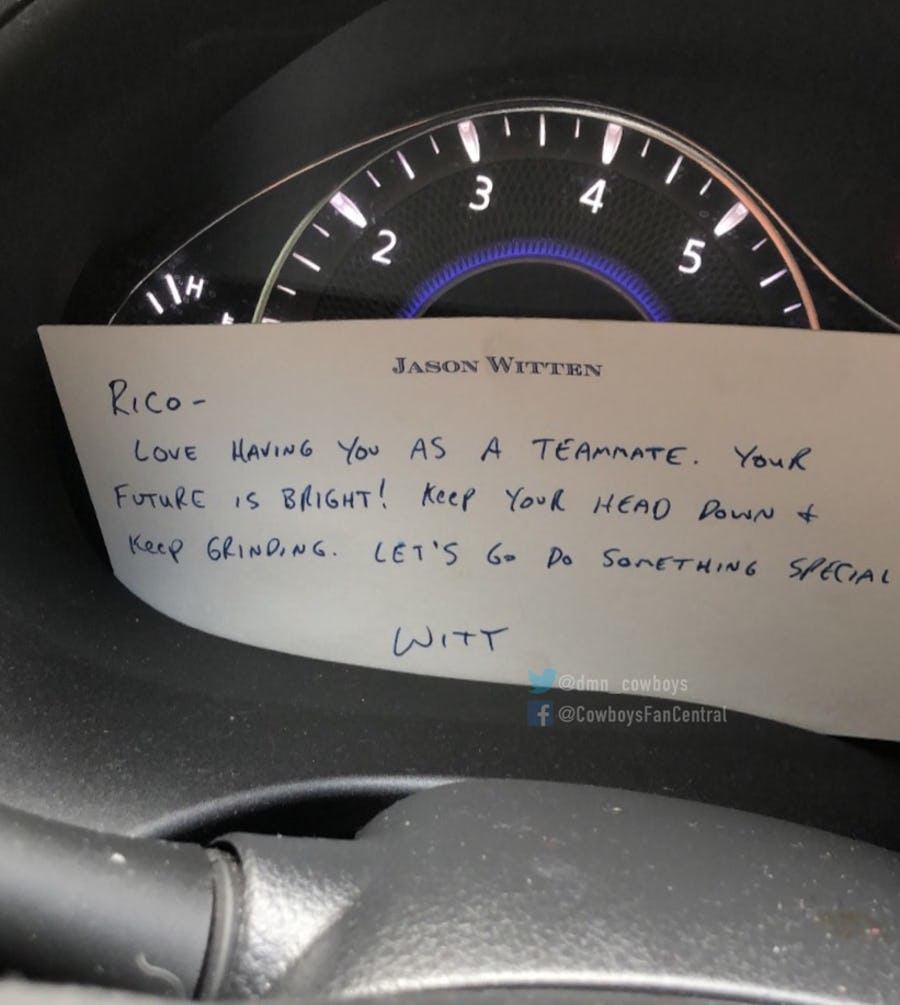 If Witten truly sees a “bright future” for Rico Gathers, who Head Coach Jason Garrett says needs work in the running game, there is no reason the Cowboys can't find a role for him this season. With an entirely unproven group of wide receivers, Gathers could be the reliable mismatch for Dak Prescott to target in the middle of the field.

Prescott was the ninth worst quarterback in the league last season in red zone completion percentage, surely something the 6'6″ TE Gathers could help improve.

Gathers may be a long way off from becoming Prescott's version of Witten to Tony Romo, but there is still hope for the 2016 draft pick, according to now football analyst Jason Witten.

The Cowboys want Rico to be Jason Witten but he’ll never be Witten, that type of TE is dime a dozen now . It sounds crazy but Rico could be better than Witten if they just let him be him .The cowboys tend to get caught up in this system where if you dont do it THEIR way they consider it wrong, i mean we watched Marcellus Bennett become an All-Pro as soon as he left Dallas. Rico may not be the best blocker but neither is Gronk, Ertz, Kelce,and others. Rico is a freak talent that i know for sure no cowboys fan wants to see blow up on another team like Bennett did in Chicago

Bennett had a damn good year in New York too.

Rico is 6’8″ not 6’6″… And watching film from the preseason, it didn’t appear as though there was much opposition for him in the run game. I feel Dallas is just being really coy about him. They kept him off the practice squad and on the roster for a reason. The kid is legit.