The Dallas Cowboys aren't exactly cruising into the 2021 NFC playoffs. But while they work to shore up issues seen in Sunday's loss to the Cardinals and throughout the second half of the season, the Cowboys have to be especially concerned about having one of the league's worst kickers this year in Greg Zuerlein.

For perspective, among kickers who've played in at least five games or more this year, Zuerlein's currently ranked 21st in field goals and 25th in extra points.

Beyond the stats, we've now reached the dreaded “uneasy feeling” point whenever Greg enters the game. We're a long way from the days of automatic Dan Bailey; Cowboys Nation now breathes a collective sigh of relief when Zuerlein's kicks make it through the uprights.

Sometimes Greg can still pull of a heroic act, such as his 56-yard game winner in Week 2 against the Chargers or that amazing onside kick last year against the Falcons. But his missed kicks in other games have, at least mathematically, been the difference between potential wins and frustrating losses.

After a missed field goal last week against the Cardinals, and an eventual three-point loss for Dallas, the criticism and concern over Zuerlein is on the rise.

The Cowboys have lost 3 games by a combined 8 points.

Unfortunately, there's nothing the Cowboys can really do about this now. We're only 10-11 days out from Dallas' first playoff game and any kicker brought in today would be an untimely dice roll. There's not even a backup option on the practice squad.

As he did for eight seasons with the Rams and now two in Dallas, Special Teams Coordinator John Fassel is going to ride or die with Greg Zuerlein. We can only hope that loyalty doesn't take the Cowboys' postseason down with them.

Zuerlein's inconsistency is hardly the only issue Dallas has right now. Dak Prescott's been shaky, the run game's been flaky, and Arizona made the defense look much less dangerous last week than we've enjoyed most of the year. Questions about who the Cowboys really are, especially once they face other NFC contenders, are plenty and valid.

But at this point there's no question about Greg Zuerlein. He's never really bounced back from a 2018 groin injury that coincided with hitting the wrong side of 30 years old. He's no longer “Greg the Leg” and is now simply one of the least reliable kickers in the NFL.

And, forever how much longer the Cowboys' season goes, he's the guy that they will be counting on in potentially game-deciding moments.

Didn’t they sign Lirim Harejhulajuh to their practice squad a month ago. Sure kicks on xpoints and accurate in less than 50 yds.

He’s with the Carolina Panthers now. They picked him up after Dallas released him.

He is a liability for sure, but it is a stretch to call him the greatest liability. Far more points are left off the board by the inconsistencies in offensive line play, penalties up and down the line and poor passing by Dak. That said, the kicking woes are a concern. It just takes the wind out of the offenses sails to either have a mid range field goal go awry or a PAT. Dallas has lost a few games this year due to those missing points and now when that happens early in a game it has to get into their heads a bit. I don’t know what the stats would be, but there has to be missing points due to the Boys going for it on fourth down and not converting rather than trying a filed goal from distance. Place kicker is surely a place to upgrade next year.

I don’t even know what to say! Between him and dak it’s definitely an up, down emotional feeling! Just don’t know when they are showing up to play!

It seems like it’s another “maybe next year” before their One and Done playoff game is played on Saturday.

If the Cowboys have an early exit from the playoffs it will be because of Dak or Greg (A.K.A-wide left) or both. 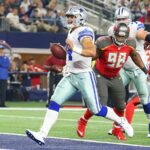 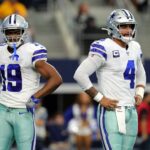