If there’s one thing the national football world seemed to agree on last season, it’s that Scott Linehan’s offense had grown “stale.”

After starting the Dak Prescott/Scott Linehan era off fast, with one of the league’s best offenses in 2016 leading them to a 13-3 record, Dallas quickly fell down those offensive leaderboards. As pieces on the offensive line were forced to shuffle due to free agency, injury, or illness and Ezekiel Elliott faced suspension, the Cowboys offense sputtered during ’17 and ’18.

Though the Amari Cooper trade gave the unit a quick boost of energy en route to a division title a year ago, the Cowboys offense still seemed behind the curve when compared to the rest of the league.

Much has been made about the hiring of Kellen Moore. Some believe he will be the one to bring much needed modern elements to the Cowboys offense, helping them compete with the loads of firepower around the NFC. Others see this as more of the same, as Jason Garrett is still the one ultimately in charge at The Star.

I decided to take a closer look at the Cowboys offensive efficiency numbers over the last three seasons to pinpoint exactly where they can improve. I also watched a bit of Kellen Moore from his quarterback days at Boise State, to see what aspects of that elite college offense he may look to incorporate with his new professional offense. The results were far from surprising, though they were certainly enlightening as we head into this 2019 campaign.

If you’re on NFL Twitter as much as I am, you’re probably sick of reading about play action passing. Analysts have been using the term as a sort of quick-fix for a struggling passing offense, pointing to the efficiency numbers of teams that do it well, such as the Los Angeles Rams.

The bottom line is, you need to have an efficient passing game to win in the NFL. And it’s hard to be more efficient through the air than the Cowboys have been in their play action passing game.

Let’s start back. In 2016, Dak Prescott dazzled all year long to earn himself Rookie of the Year honors. His best full season to date, Prescott immediately put himself into the conversation with top two picks Jared Goff and Carson Wentz for who will be the best young quarterback in that 2016 class. But, then, in 2017 things went a bit sour for Prescott, and stayed that way until Amari Cooper joined the Cowboys midway through the 2018 season.

While injuries, suspensions, and regression can all explain what has happened to the Cowboys passing offense since that miraculous rookie year, play action passing rate might do a better job than any of them. In 2016 the Cowboys finished with a 24% play action rate, placing them 3rd in the NFL in terms of usage. They averaged 9 yards per play on play action passes, with a DVOA of 45.8%. They were really good at it, and compared to the rest of the league, they did it a lot.

As play action rates around the league rose, however, the Cowboys stayed the same. They went from efficient and “smart” in 2016, their best offensive year with Dak Prescott, to outdated and stale. And they did so quickly. 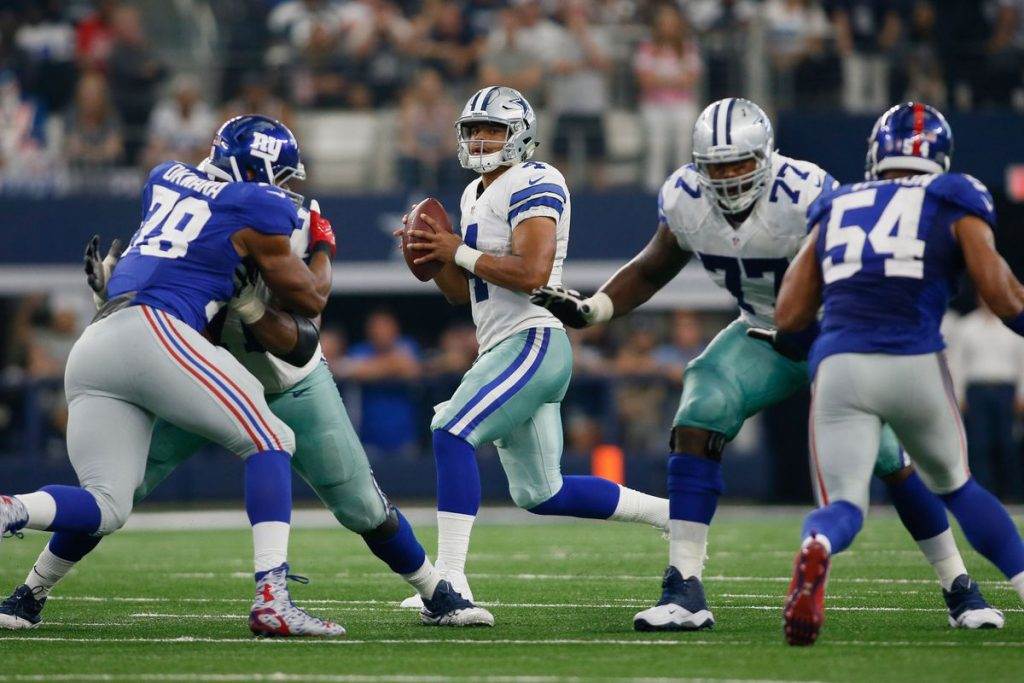 In 2017 Dallas used play action just 22% of the time. While not a big dropoff from a season ago, they fell in the league rankings from 3rd to 19th. And while they remained a positive passing team in terms of DVOA overall, their passing efficiently rose 19.8% when using play action as compared to standard drop-back passing.

In other words, the Cowboys were really good passing the ball after the play fake. Yet, for whatever reason, they didn’t utilize it nearly enough last season.

If they are going to become “modern” or “cutting edge,” they should be joining teams like the Rams, Eagles, and Patriots at the top of the play action rate leaderboards. Especially when the data suggests there are no diminishing returns with increased play action usage.

So, this would suggest the Cowboys have to pay Ezekiel Elliott, right?

As discussed by Ben Baldwin in this Football Outsiders article, no relationship between rushing frequency or success and play action passing success has been found. Running the football does not set up more successful play action passes, despite what traditional football knowledge would suggest.

You can run and succeed at play action pass plays without running the football well, or much at all.

Ah, another favorite term of NFL nerd Twitter, pre-snap motion. As a former college offensive lineman (yeah, division three, whatever) the infatuation with pre-snap motion at the NFL level is sort of funny to me.

At the high school and college levels, pre-snap motion is used all the time. I can’t even count how many pre-snap flops or shifts, jet motions, sprint motions, fly motions/sweeps, etc. get used on a daily basis at practice. So how come the NFL is so far behind these lower levels of football?

Well, to be honest, they tend to be behind more often than not. But that’s besides the point.

In 2018 the Cowboys used pre-snap motion 31% of the time, ranking 24th in the NFL according to Sports Info Solutions. New quarterbacks coach Jon Kitna, however, spoke to The Ringer about changing that in 2019.

“We want to spread it out and make the defense have to cover the full field,” Kitna says. “We’re going to try to use formations and shifts and movements to our advantage. I think a lot of people have that idea coming in, but we’re going to emphasize that.” – Jon Kitna

Incorporating more motions would be huge for the Cowboys offense. These motions can create that space Kitna is speaking to, especially considering how often opposing defenses will use man coverage against the Cowboys.

What would an offense like this look like? Let’s take a look at Kellen Moore’s college days for a couple examples.

On this play above, the Broncos bring their tight end in motion across the formation. Kellen Moore snaps the ball as the tight end reaches the outside shoulder of the tackle. Then, they use both the play action fake and the motioned tight end to draw the defenders’ eyes into the backfield/flats.

The hesitation from the linebackers and safeties gives Kellen the chance to take a deep shot down the field for a huge completion and a touchdown.

Here’s another example of Kellen Moore executing a touchdown pass off play action. This time, it’s a wide receiver who goes in motion across the formation until he gets outside the far hash. The defense is forced to indicate their coverage because of the motion, so Kellen Moore knows exactly what look they are giving pre-snap.

The play action fake draws the linebackers up further towards the line of scrimmage, and Moore drops it over there heads to the previously motioned receiver for a touchdown.

Honestly, the plays themselves shouldn’t be all that different. It’s about dressing the packaging up in unique ways while still running the same base type plays they’ve always run. Every team runs inside and outside zone. Some do it better than others, though, and a lot of that has to do with the packaging.

The Cowboys can still, if they must, “establish the run.” They can just do so in ways that keep the defense guessing, rather than pounding their heads against the wall against unfavorable box counts.

It’s not about trick plays or gadgets, it’s about creativity and variety.