The New England Patriots welcome the Dallas Cowboys to Gillette Stadium in Week 6 of the NFL. Both teams enter this game following successive week 5 victories, with an impressive come-from-behind win for the Patriots – they defeated the Houston Texans 25-22. Meanwhile, the continuing dominance in Dallas saw the Cowboys obliterate the New York Giants 44-20.

Who Can Stop the Dallas Cowboys?

There’s no denying that Dak Prescott & co. are currently standing as one of the league’s most formidable teams. Despite losing to the defending champions from Tampa Bay during the season opener, the tide quickly turned in Texas, and they’ve been unstoppable ever since. This story continued in week 5, cruising up and down the field without a struggle against the NY Giants defense.

515 yards later, a final score of 44-20 versus the Giants put an end to another chapter in the Cowboys season, which has been a showcase for Dak Prescott and Ezekiel Elliott.

Elliott reached the end zone on the ground and through the air, totaling 112 yards, while Prescott threw for 302 yards and three scores. Impressively, Zeke has now amassed 100 yards in three consecutive games for the first time since 2019.

Naturally, we often highlight the successes in offense, because who doesn’t love a touchdown hungry team? But it’s the Dallas defense that has been the backbone of this year’s success.

After the week 5 clash, they’d forced two turnovers against the Giants, which became their ninth consecutive game where they’d achieved this feat. In addition, they held the opposition to 22 points or below for the third time in their previous five games.

Of course, some will argue that the Giants were missing a significant number of offensive starters during Week 5 but denying Dallas’ improved defense is impossible as they’re becoming the team to beat as a top NFC contender.

Sitting comfortably in first place in the NFC East, the Cowboys seemingly have their division on lockdown with four back-to-back wins. Heading into Patriot’s territory won’t be an easy task, but does the championship-winning experience of Bill Belichick have the capability of figuring out Dak Prescott?

Bill Belichick vs. The Cowboys

It’s all well and good preparing for Dak Prescott, but the task ahead for Bill Belichick stems around much more than one lone player.

“There are a lot of great players in this league, but you really have to prepare for an entire team,” Belichick told Boston.com. “You can’t just prepare for one guy.

“But I don’t think we’ll see anybody better than Tom Brady,” Belichick said. “But Dak does some things that Tom doesn’t do. Tom does some things that Dak doesn’t do. The skill players are different, the lines are different, so it’s really about defending the team, not just one person, although you have to be aware of defending individual players’ skills.”

Close Encounter with The Texans

Davis Mills owned the Patriots for most of Sunday’s game, so it should come as no surprise when the NFL odds and scores are favoring the Cowboys in Week 6.

Bill Belichick’s rookie quarterbacks aren’t delivering the playoff quality results that are required, and this factor becomes evident as we continue to see the Patriots struggle week to week. 312 pass yards and 3 touchdown scores for Mills came after a rocky 87 passing yards in Buffalo the week prior.

Fortunately, unanswered field goals from Houston and 231 passing yards via Mac Jones managed to save the Patriots from embarrassment. The Pats will roll into Week 6 ranked 25th in the league in scoring offense and ranked 26th in total yards – a set of statistics the Cowboys can certainly capitalize on. 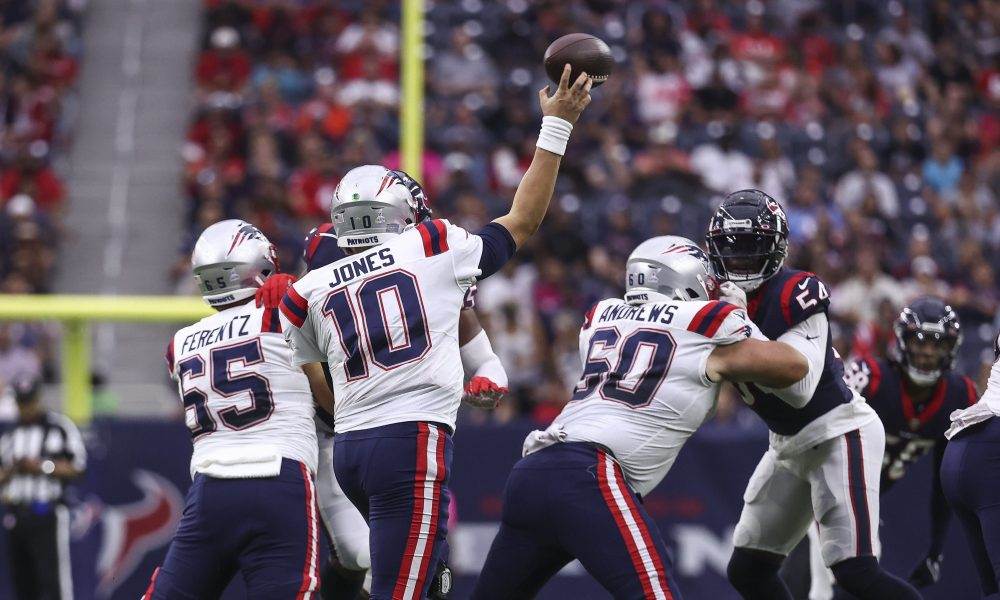 As of Monday, the Cowboys are favored at the sportsbooks by 3.5 points; however, even when the Cowboys aren’t playing well, they’re one of America's most heavily bet on teams. The line movement will undoubtedly shift in their favor, and I wouldn’t be surprised to see Dallas favored by a touchdown or more by game day.

We should also consider that the Tampa Bay Buccanneers were seven-point favorites when facing the Pats last week, and the Cowboys are looking considerably more robust than the Buccaneers after five weeks of NFL action.

The inconsistency in New England is a huge red flag for bettors, even more so when they’re facing a 4-1 Cowboys team who’s coming off a blowout victory.

Star Staffhttps://InsideTheStar.com/
This is the General Staff account for Inside The Star, a blog for Dallas Cowboys news, scores, schedule, rumors, and analysis. We are the official home for @CowboysNation on Twitter. Follow us today for new content updates straight from our timeline. To learn more about our staff, please visit our Staff listing.
Previous article
“Neon” Lights: Trevon Diggs’ INT Streak Leads to Deion Comparison
Next article
Aikman Says Garrett Deserves Credit for Cowboys’ 2021 Success

By the way while I’m on the subject of slamming ole JJ could you imagine if the vail was removed and we could see what he and the other owners across the league have said through the years about their players and other issues? How bout let’s go into an NFL locker room or stand on the sideline during a game and hear the players calling each other racial slurs! I’m not a big fan of John Gruden or the Raiders but we all know that there was only ONE man that walked the face of the earth and never said or had a racist thought!! Ok I’m done venting on this Thursday morning so I want to hear from all my Cowboy brothers on what y’all think!