The Dallas Cowboys, winners of the NFC East for the second time in three seasons, are locked into the fourth seed in the upcoming NFC playoffs. All that stands between the Cowboys and a home playoff game at AT&T Stadium is a meaningless trip to the New York Giants in week 17. Though the Cowboys have nothing to play for, their potential playoff opponents do, as the fifth seed is yet to be determined between the Seattle Seahawks and Minnesota Vikings.

Prior to Sunday, I’ll share my thoughts here on the Cowboys match up with both teams. With the Seahawks controlling their own path towards the fifth seed, having beaten Dallas already this year back in week three, it makes the most sense to start here – nearly where this season began considering the driving force of this offseason was the status of Earl Thomas, connecting these two teams for months on end.

Thomas has of course not been a factor for the Seahawks revamped defense ever since week four, fracturing his lower leg at the Cardinals and being placed on injured reserve. In his last game of the season, and potentially final time in a Seahawks uniform, Thomas totaled seven tackles and intercepted Cowboys Quarterback Dak Prescott twice.

Providing quite the statement as to why the Cowboys could use his services, both teams have made strides to recover from losing records early in the year and assure a playoff berth. The Seahawks improved their home record to 5-2 last week with a prime time win over the Kansas City Chiefs, putting Pete Carroll’s team in the postseason for the seventh time in his nine years.

Even with something to play for in the final game of the season, Seattle extended Carroll with a new contract through 2021 on Monday. The Seahawks confidence in their coach, winner of five of his last six games, feels primed to pay off in the playoffs again.

Whether or not the same can be said about Jason Garrett’s Cowboys, considered one of the hottest teams in the league amidst a five game win streak that was snapped two weeks ago, is the burning question this holiday season for Cowboys Nation.

The Cowboys have not shied away from resting their starters in situations just like the one they’ll enter this Sunday. This leaves the Cowboys sample size for the playoffs a 27-20 win over the Tampa Bay Buccaneers to clinch the NFC East on home turf.

Considering their performance was in response to a shutout loss, the Cowboys did more than enough on Sunday against Tampa, but left continued doubts on offense that the Seahawks are still primed to exploit as they did earlier in the season.

Well before the Cowboys even realized a presence like Amari Cooper was needed at wide receiver, they turned the football over three times, twice in Seahawks territory, losing 24-13 to fall to 1-2. Tight End Geoff Swaim was the Cowboys leading receiver in this game with five catches. Running Back Ezekiel Elliott saw his second lowest share of carries on the season, producing 127 yards on just 16 touches.

In games at Carolina and Washington, where Elliott had a total of 30 carries with 15 in each loss, he rushed for a combined 102 yards. Learning to feed Elliott and throw the ball to Cooper (something the Cowboys have struggled to do as of late) are far from the only reasons to like their chances in a rematch vs. the Seahawks as a much improved team.

The Seahawks patchwork secondary has yielded the 20th most passing yards in the league this season. The Cowboys receivers have taken the most obvious strides needed to create this favorable match up in the Wild Card Round, but the same can quietly be said about the Dallas defense from week three until now.

The Cowboys never led in their loss at CenturyLink Field, something they’ll desperately need to play against at AT&T Stadium to keep the crowd in their favor. 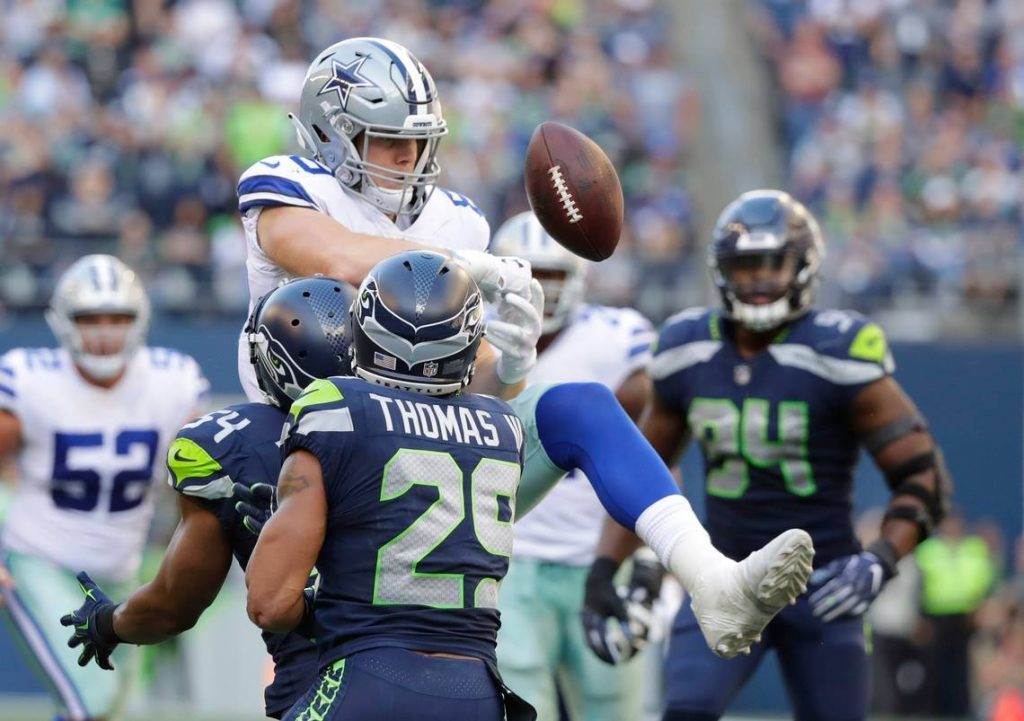 The Cowboys defense actually got off the field in a total of just 12 plays following the three turnovers by the offense, ultimately limiting the chances they had to get back in the game to the point of no return by late in the fourth quarter.

Russell Wilson is playing like a MVP caliber quarterback lately. Rising to the occasion are the likes of Randy Gregory, Byron Jones, Leighton Vander Esch, and Jaylon Smith on defense for the Cowboys at the right time. Kris Richard’s group is equipped to contain Wilson and stymie the Seahawks running game, which did break out for 210 yards on the ground against the Chiefs in week 16.

Scoring themselves on defense thanks to Jaylon Smith and cashing in another quick score on Gregory’s second fumble recovery is the reason the Cowboys overcame this stat so easily on Sunday. In a possible playoff match up with the Seahawks, it will take a similar opportunistic swing on defense to turn the game in the home team’s favor.

Regardless of who the Cowboys play, with Mike Zimmer and the Vikings being the only alternative to the Seahawks, this will remain a concern through week 17 and straight into Wild Card weekend. Cleaning up an uncharacteristic Elliott fumble and trusting the growth that Cooper and Michael Gallup have made on offense since the Cowboys first meeting with Seattle is still certainly achievable for Linehan’s offense.

The Cowboys proved they have all the makings of a Super Bowl team during their November/early December win streak, and proved to themselves the work needed to get there in week three. With the playoffs being a new season entirely, figuring out which Cowboys and Seahawks teams will truly show up to advance their season to the NFC Championship game is going to be a heated debate with more than enough story lines to cover the time between now and then.

If it happens, this would be the third meeting between these teams in the last two years, with the Seahawks winning both going back to last year’s road win – eliminating the Cowboys from playoff contention.

The Seahawks officially earn the #5 seed in the conference with a win vs. the Cardinals on Sunday.

Tell us what you think about “Potential Playoff Preview: Cowboys Host Seahawks as Changed Team from Early Loss” in the comments below. You can also email me at Sean.Martin@InsideTheStar.com, or Tweet to me at @SeanMartinNFL!