Being a professional quarterback is hard.

Being the starting professional quarterback for the Dallas Cowboys, well, that tends to be even more difficult. Playing on national television just about every week, being under constant scrutiny from both local and national media, and being hated by most of the league outside (and even inside) of your own fanbase can be a tall-task for any human being.

And for the now third year starter Dak Prescott, he has learned that the hard way his past 12 games.

What started as a smooth, fun ride for Prescott quickly turned into the half season from hell in 2017. Losing key offensive players around him Prescott lost faith in both his supporting cast and himself, and hadn’t really looked the same through three games in 2018 either.

Entering Sunday’s game against the Detroit Lions, Dak Prescott’s entire reputation was on the line. To be honest, most had already given up on him as any type of long term answer at quarterback, believing he is destined to be a career backup and/or journeyman starter from here on out. Early mock drafts have even begun projecting the Cowboys to take a first round quarterback. After all, Prescott hadn’t thrown for 200 yards in five games, and was coming off one of the worst losses in terms of quality of opponent in his entire NFL career.

Sunday, though, Dak Prescott responded. The man who has fought through adversity his entire life kept fighting, en route to 255 passing yards and 2 touchdowns against statistically the best pass defense in all of football. Time and time against Prescott tested tight windows and delivered some nice passes down the field which we hadn’t seen him attempt in quite some time. 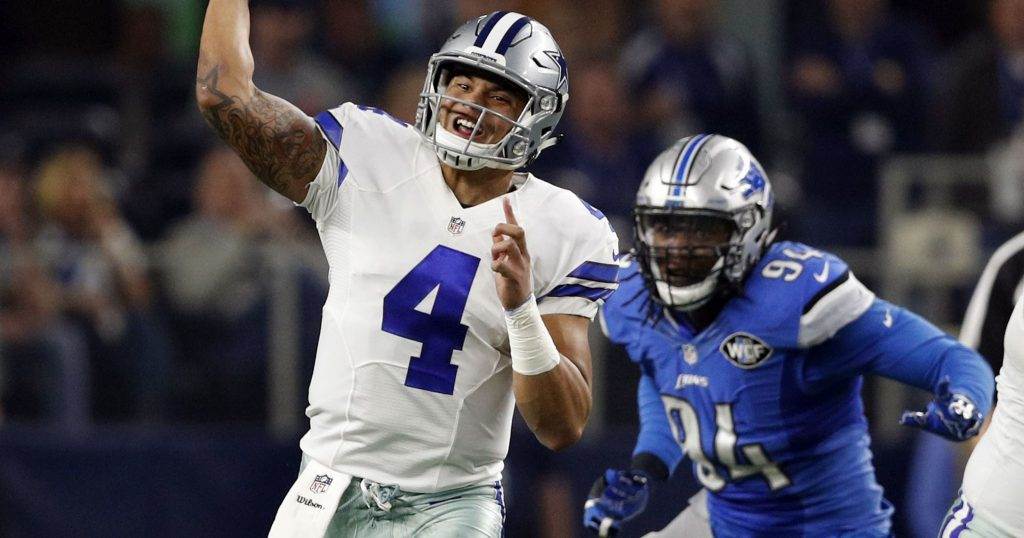 The most important of these yards, of course, coming on the game-sealing 34 yard completion down the sideline to running back Ezekiel Elliott which set up Brett Maher’s winning field goal.

Prescott and Elliott, the two rookies which took the league by storm in 2016. The two players who had been deemed disappointing through the first three games of their third seasons. Finally, they stepped up and made big plays to secure another win in 2018.

While Dak Prescott played as well as he has since the Ezekiel Elliott suspension on Sunday, the jury is very much still out on his future as the franchise quarterback. The Cowboys now sit at 2-2, however, and Prescott has taken a key first step towards securing both a contract and the starting job moving forward into future seasons.

He must continue to play like “his old self,” while improving on the deficiencies which still popped up at times during this win. For example, Prescott took an awful sack on the Cowboys’ opening drive of the second half which took them out of potential field goal range. His pocket awareness must improve, and he has to learn to get rid of the ball quicker when the defense dials up pressure.

While all of this is true, we should still congratulate Dak Prescott and the Cowboys’ offense for their performance against the Lions. They have to keep this going as they enter a key part of their schedule, but Sunday was a nice first step.