With his 40-7 win over the Jacksonville Jaguars on Sunday, Jason Garrett's Cowboys did more than enough to silence talks of possible firings on the coaching staff for at least a week. According to a report from Dallas Cowboys Feature Writer Jeff Sullivan, it's possible Garrett has earned much more than this, with an extension for the eighth year head coach looming.

Sounds like another extension could be signed soon he’s not going anywhere.

The Cowboys have alternated wins and losses through the first six weeks of the season. Thanks to the rest of the NFC East getting off to an equally slow start, the 3-3 Cowboys are still playing for first place this week in Washington.

When considering these marginal victories in the grand scheme of what Garrett has achieved since taking over fully in 2011, the timing to extend him early in 2018 feels peculiar. The Cowboys went 8-8 in Garrett's first three years as he turned the roster over, and in similar fashion his young team has done little to prove they're not on track for a .500 record this year.

Sullivan does go on to explain Garrett's impact at The Star throughout the week, which is often forgotten about once he's in the public eye during game day. The Cowboys comfort with Garrett leading the way still has to be considered alongside the deficiencies of his staff to put players in the best position to win.

Six days a week top-3 coach in the league. Just struggles a bit on game days

As their last franchise quarterback said on his way out the door, “football is a meritocracy,” where, “nothing is given”.

It is widely accepted that the Cowboys coaching staff will be mainly responsible for at least one loss a season. Be it Scott Linehan or Garrett, the Cowboys chance at victory is snatched away from them by coaching annually.

Even with a win at the Redskins this week, it's hard to imagine not bringing up early season defeats in Carolina, Seattle, and Houston, as games the Cowboys missed out on.

The duality of Garrett punting away a chance to win at the Texans last week before leading his team to their largest win since 2014 is simply who he is. Even before the Cowboys took the field for a seemingly tough match up against the Jaguars, Jerry Jones delivered a vote of confidence in Garrett – as he's done before in an offense that finally capitalized on their talent, making 40 points come easy on the league's top defense.

Garrett's current contract runs through 2019. If you believe he's struck gold in Quarterback Dak Prescott, a young passer he hitched his wagon to early in order to survive the post-Romo era, the Cowboys would have a decision to make on both Garrett and Prescott at the same time.

Of course, that is if they're willing to let Prescott play out the final year of his rookie deal before signing an extension, and if an extension of his own isn't coming Garrett's way eminently.

This story has not gained traction with the rest of the local or national media, and that's likely because Garrett still has time in Dallas. Not only has he been afforded an amount of time that some would call unearned, but the time ahead of him makes the idea of a new extension obscene.

Regardless of when Garrett sits down to discuss his future with the Jones', it's become clearer by the day that he'll have their full support behind closed doors. Such is the stability Garrett provides the Cowboys, as well as the mediocrity to never advance past the Divisional Round of the playoffs.

The Cowboys have done nothing so far in 2018 to prove they can be the team that snaps this streak for Garrett, and must first prove that their 40-7 win over the Jaguars was no anomaly. Earning their first win on the road and improving to 2-0 in the NFC East is another way for the Cowboys to take strides towards winning the division.

The Redskins would drop to 0-1 with the loss, and the Eagles have managed just one divisional win against the Giants thus far.

Let's not forget that this is where the team expects to be every year. Even though the 4-3 Cowboys would face far fewer questions about the future for their coaches and tenured players, buying in to Garrett even more after each win, the week-to-week nature of the NFL should have Dallas weary of locking in Jason for a single game past next season.

This honestly just made me sick 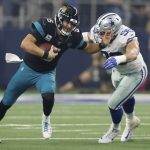 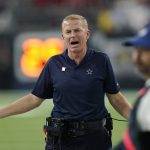