The New York Jets have been without starting Quarterback Sam Darnold since Week One of the 2019 season. He returns this week after recovering from mono, but gets a tough test with the Dallas Cowboys coming to town desperate to end a two-game losing streak. How much will Darnold's return help the Jets upset the Cowboys' plans?

After being the third-overall pick in last year's draft, Darnold has unquestionably been the Jets' best quarterback. While that isn't a high bar to reach, Sam definitely gives New York a better chance of winning than they had with Luke Falk.

In his one game this year, Sam Darnold did solid work with over 68% completions, 175 yards, and one touchdown against a tough Buffalo Bills defense. In his playing time over the last three games, Falk has no touchdowns against three interceptions and is completing 64% of his passes.

The one are where Falk has bested Darnold is in yardage, averaging 5.7 YPA over just 4.3 from Sam's one game. Darnold only mustered 175 yards off 28 completions, which is a horrific production rate for any passer.

It should come as no surprise that the Jets have the least productive passing offense in the NFL right now, and are 30th in team passer rating between all of their quarterbacks.

Sam Darnold can help improve some of these numbers but will likely not make the Jets significantly better. Even when he was playing his best football last year in December, he still had low YPA and wasn't scoring at a high clip.

If the Dallas Cowboys' offense can get back to what we saw in Weeks 1-3, then improved ball security won't be enough for New York to keep up on the scoreboard.

The biggest reason that Sam Darnold may not be much help is the woeful Jets' pass protection. New York has given up a league-high 23 sacks this year despite only playing in four games; one of the few teams to already have its bye week.

While Luke Falk took most of those sacks with 16, Darnold was taken down four times in his single game against the Bills.

The Cowboys now have two legitimate pass rushing threats on each side of the line in DeMarcus Lawrence and Robert Quinn. They will also be getting starting DT Antwaun Woods back from injury after a three-week absence.

If the Jets weren't already bad enough at protecting the QB, they are likely to be missing Pro Bowl guard Kelechi Osemele this week with multiple health issues.

None would deny that Sam Darnold has shown the potential to be a solid NFL quarterback. But right now his team just has too far left to go in its rebuild. He's going to need more help to get the Jets back to contending, and it's simply not there yet in 2019.

So what that mean for our Dallas Cowboys?

Like the Giants, Redskins, and Dolphins from earlier this season, the Jets give Dallas another highly winnable game on their schedule. And really, outside of the rematches with the Giants and Skins, it may be the last time we can say that.

With the Philadelphia Eagles coming to town next week, and the entire schedule stiffening from this point forward, the Cowboys have to pick up this win. It may be a road game against an AFC opponent, but a loss here could be fatal to any postseason goals.

We can only that Dallas is up to the task after two disappointing weeks. We'll see just how tough Sam Darnold and the Jets make that task on Sunday. 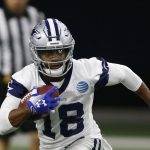 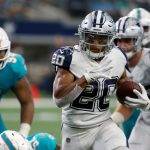