The Dallas Cowboys wanted to stay ready for the playoffs by playing most of their starters on Saturday night at the Eagles, and in doing so earned the third seed in the NFC thanks to some outside help on Sunday. The Cowboys drubbing another NFC East opponent to finish 6-0 in the division sets up a meeting with the sixth seeded 49ers.

Dallas will have to prove they truly built momentum for this game in week 18 early on, as San Francisco comes in fresh off a win they needed just to qualify for the playoffs. Desperately needing a signature moment as the 49ers quarterback, Jimmy Garoppolo leaned on a strong running game to spark a 17-0 comeback at the Rams.

The 49ers defense sealed the game in overtime, when a secondary that spent much of the first half giving up big plays to Cooper Kupp and Odell Beckham Jr. turned over Matt Stafford attempting to win the game with a touchdown.

The win earned a season sweep for the 49ers against the Rams. Kyle Shanahan's team was sitting at .500 before hosting the Rams on Monday Night Football in week ten. Their 31-10 win was the start of a three-game win streak that kept them alive until this rematch in Los Angeles. 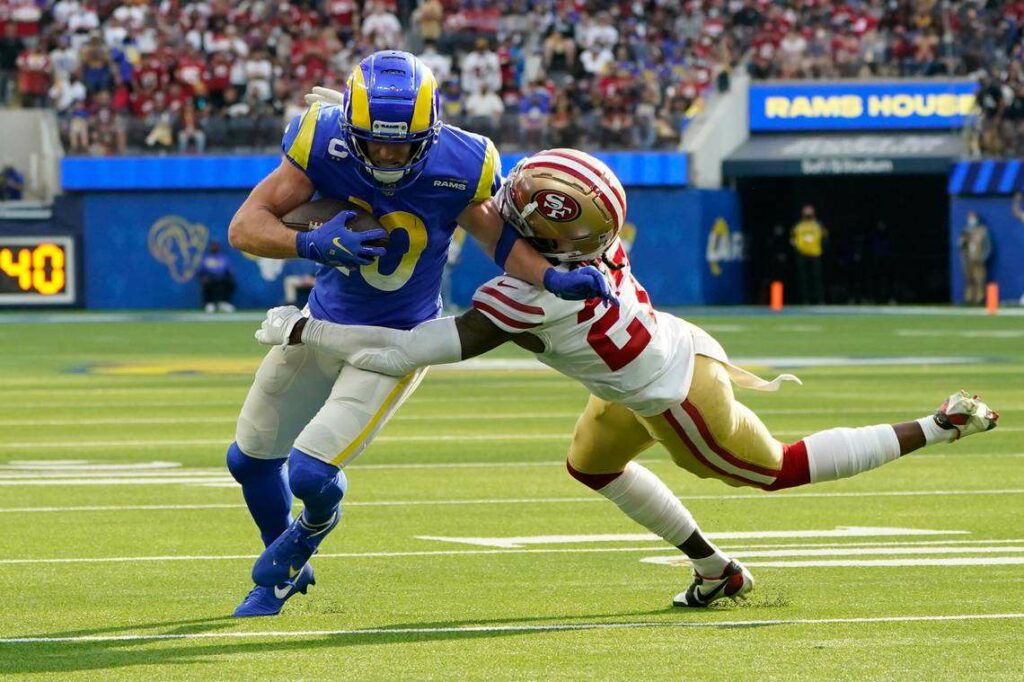 The 49ers were swept by the Seahawks and Cardinals in division play, but their two wins against the Rams count as two of the four against playoff teams this year. The others came back in week two at the Eagles (NFC's #7 seed) and week 14 at the Bengals (AFC seed #4).

Because of this, there may be no better team that exemplifies the importance of playing your best football to have a shot in the postseason than these 49ers – a trendy pick to roll into AT&T Stadium and advance to the Divisional Round.

After studying their dramatic week 18 win, here are a few things the Cowboys must prevent if they want to stop that from happening.

The Rams were not able to run the ball with the lead in the second half, and the 49ers front four regularly got to Matt Stafford. The 49ers defense is playing with injuries in the secondary, starting Emmanuel Moseley and Dontae Johnson at cornerback against Kupp and Beckham Jr. A front seven led by Frank Warner, Nick Bosa, and Arik Armstead made up for this in a big way, with the 49ers secondary coming down to play the run well.

When Stafford was protected, the Rams were able to throw into man coverage with 49ers linebackers struggling  to take away intermediate passes. This could be yet another game where the Cowboys run game is minimized by a stout defensive front, but blocking in pass protection with Tyron Smith and La'el Collins on the edge will be crucial.

Amari Cooper, CeeDee Lamb, and Cedrick Wilson will have their matchups to make plays down the field in this game, but only if Kellen Moore and the Cowboys aren't in long passing downs early. When San Francisco did bring extra pressure, it was usually Samson Ebukam making plays off the edge. Playing against his former team in the Rams, Ebukam's speed paired with his ability to shed blocks in the run game made him a tough assignment for the LA offensive line.

The Rams hit a goal line play-action to Tyler Higbee for a first half touchdown, taking advantage of the 49ers aggressive defense.

The Cowboys had TE Blake Jarwin back in the lineup against the Eagles, and tried to immediately get him involved in the passing game with a similar red zone look. Playing in his first game since week eight, Jarwin had the pass go through his hands, leading to a Dalton Schultz touchdown on the next play.

Whoever gets the opportunity between Jarwin or Schultz to play as a check down and red zone option for Dak Prescott, the throws will be there on unscripted plays as the Cowboys are again  playing without WR Michael Gallup.

On offense for the 49ers, Kyle Shanahan deserves a lot of credit for sticking with the run game in the second half. This team's best playmaker on offense is Deebo Samuel, who ran for 45 yards and a touchdown, caught four passes for 95 yards, and threw another touchdown both in the third quarter.

Deebo Samuel plays in the second half vs. #Rams, in order:

Also help set up the #49ers FG before the half for all 17 points of the comeback. pic.twitter.com/mAM7dEQLRW

The 49ers started the second half with the ball, and down 17-0 handed the ball to Samuel on a third down at the 16 for their first points. Their willingness to stick with the downhill run game set up passing plays of 43, 34, and 42 all in the fourth quarter or overtime – the three longest plays of the game for Garoppolo's offense. Samuel was on the receiving end of two of these, and his run after the catch ability is something Dallas must prepare for.

Simply denying Samuel the ball with a coverage player like Trevon Diggs sets up the Cowboys for his rushing ability. Micah Parsons helping on Samuel would give the Cowboys one less pass rusher to pressure Garoppolo – who threw four interceptions over his last two games of the regular season.

If the Cowboys offense lets their defense play from ahead, Dan Quinn may put extra DBs like Jourdan Lewis and Donovan Wilson on the field to limit downfield passes and force the 49ers to drive steadily down the field.

The Cowboys and 49ers meeting in the playoffs for the first time since 1994 will bring back NFC Championship game memories for some fans. For many others in Arlington on Sunday – where Cowboys owner Jerry Jones has already challenged the home crowd to come out and provide an advantage – this is a meeting of two teams built to advance in this year's playoffs.

For a Cowboys team preparing for this moment all season after grabbing an early lead in the NFC East, the 49ers are a dangerous matchup with the competitiveness to clinch a playoff spot on the road to end the season.

Determining who advances to the Divisional Round will come down to which offense plays to it's strengths the best, with both capable of putting up points at will when avoiding their own miscues.

Our D line had better be on their A-game this weekend. The same goes for LVE, Kearse and Neal. If our front 7 struggle against the run, we’re SOL.

Dak better come out strong as well. This struggling through the 1st Qtr+ and then trying to play catch up or hoping the D can bail you out has got to stop in the playoffs.

I see Quinn as being more capable of makign adjustments then Moore. I hope that means he considers using a 5 man front base D with more “beef” a la Tank, Neville, Osi, Trysten and Randy. He’ll use 2 LBs with Micah as DE and possibly spy Deebo out of backfield. Kearse can play safety/LB hybrid, blitz into running lanes and Jourdan Lewis can make timed blitzes off the edge. I worry that with Diggs trying to be aggressive he’ll allow a few big splash plays. Our D is going to need a true “TEAM” effort, but I like our chances to score as long as our O lien can pass block to allow us to take advantage of the 9ers most glaring weakness…the secondary. Go Cowboys!!!