The Dallas Cowboys came away with a solid haul of nine players at their AT&T Stadium hosted NFL Draft. Their first round pick, Linebacker Leighton Vander Esch, did not come without some skepticism – especially given the first round slides of Calvin Ridley, D.J. Moore, and Harold Landry.

Vander Esch fills an immediate need for the Cowboys though, who lack any proven depth behind Sean Lee and Jaylon Smith.

With Kris Richard taking over as the passing game coordinator in Dallas (serving as Rod Marinelli's shadow in the war room this weekend), Vander Esch can help the Cowboys with his athleticism and size in both pass coverage and against the run.

Only a one year starter at Boise State, LVE is just scratching the surface of what the Cowboys hope he can be in the NFL. With 141 tackles in his final collegiate season, Vander Esch sat down with his new Defensive Coordinator to watch tape of Bears great Brian Urlacher during his pre-draft visit, and now the Cowboys have a LB to mold into their own star.

At 6041 (6′ 4 1/8″) and 256 pounds, Vander Esch looks the part of an intimidating middle of the field defender. Playing best when freed up to the ball though, Vander Esch is an extremely instinctual player when reading plays and shooting gaps.

Vander Esch will keep his eyes in the backfield to diagnose while still gaining proper depth in pass coverage, and has the ideal twitch to change directions and chase down ball carriers. When given a chance in the hole against backs, LVE rarely misses in stopping the player in his tracks, bringing his 33 7/8″ arms through every tackle.

Not nearly a finished product when it comes to shedding blocks, Vander Esch is productive when beating blockers to the spot with light feet. Playing with this agile but square base, Vander Esch uses his power to lower the shoulder and create negative plays.

This play against San Diego State is one of my favorite from LVE, as he clearly shows no issue “picking through trash” to chase plays on the boundary. This is a trait that will suit Vander Esch very well when asked to line up at either WILL or SAM with the Cowboys.

Vander Esch gives the Cowboys a great ability to match up their linebackers depending on formation or down and distance, as they'll also be playing in support of a very deep defensive line up front.

Another example of Vander Esch's closing speed is seen here. LVE is a heat-seeking missile when he can react to a play in front of him and identify a path to the ball, rarely getting beat to the edge with quickness but rather steered out of plays by larger blockers.

There are legitimate concerns that Leighton Vander Esch will always be a player that looks the part but continuously struggles to finish plays, particularly at this next level. When blockers are able to get into Vander Esch's frame, he is finished.

Relying on his physical traits to get to the ball, Leighton rarely shows desirable play strength against blockers to knock back or disengage. Arriving a step late more times than not because of this, Vander Esch will fail to plug his lane against the rush with the size he's capable of, instead playing upright and being dragged for extra yards on occasion.

As a pass defender, Vander Esch saw far too many receivers catch the ball going past him, creating big plays with LVE chasing behind.

This is a “flash player” that will certainly help the Cowboys defense in 2018 and beyond, but needs to be protected from himself if asked to play all three downs across multiple positions. 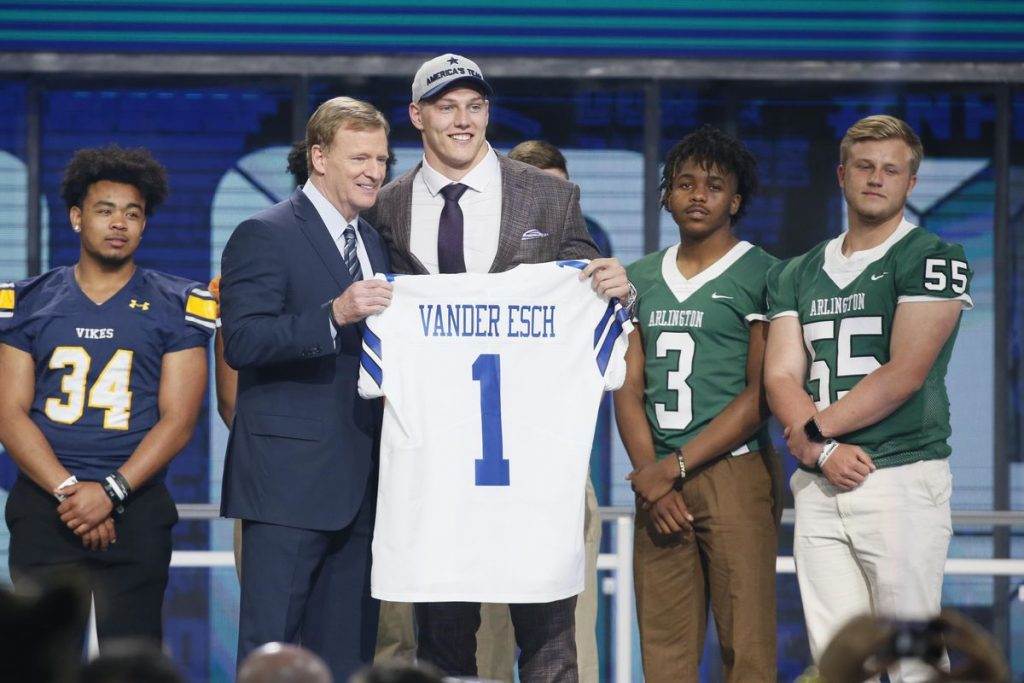 If you followed along with my coverage leading up to this 2018 NFL Draft, you know I was very critical of Vander Esch as a first round prospect. Most teams had the Mountain West Defensive Player of the Year in the round though, and the Cowboys locked in on him pretty early.

LVE is a patented Rod Marinelli defender with the traits to match the direction Dallas is going on defense, searching for elite athleticism and reaction ability to create a hard-to-break unit.

The Cowboys are as excited as Vander Esch is to get started, and working with the likes of Lee and Smith will only help Leighton.

These two starters can also help Vander Esch in 2018 by playing as much as possible, as the plan for the Cowboys should still be to see 16 games out of both. If this happens, Cowboys Nation will notice Leighton Vander Esch plenty as a third linebacker to run on the field with fresh legs – bursting through gaps to force tackles for loss and stopping plays from getting to the edge.

Cowboys expect the return of 3 starters for the playoffs

With a Monday night playoff game on the slate against Tampa Bay, the Dallas Cowboys will see a chance for three starters to return...

Sorry but I disagree I have been very vocal about this subject and I won’t change my mind dallas made a mistake drafting this guy I’m so sick of the he is the next sean lee or luke kechley or even better Brian Urlacher 2.0 not even close more like bobby carpenter jr

Put the pipe down Saul and back away slowly

You got the sorry part right. Why hate on him.? Wish him well. Let him do his thing. Dudes a Beast. Time will tell, Nobody is going to be a Urlacher, you got that right. Have a good one Saul.

Sorry Saul, you are welcome to your opinion but LVE/LB was a HUGE need for Dallas, frankly I’d have traded in from next year’s draft to add a player like Fred Warner as well. But I’m not Stephen Jones. Honestly think LB was biggest need and WR is in decent shape. BTW, really like the 2 WRs we got and the moves we made in FA & trading. Plus (granted we got lucky) we landed Conner Williams who will be outstanding.

But, quoting the article above . . . .”Playing best when freed up to the ball though. . .” the BIGGEST boneheaded move was thinking Ward is our 1. . . .we still do not have a double team forcing 1 Tech on the team. Now trading for Ward is fine but we passed on so many good 1 Tech’s, Tim Settle, Maurice Hurst (a 3 who can play 1) Foley F from UConn, Sebastain Jones Rutgers or. . .and my pet cat, Poona Ford. Plus there was a kid from Tenn.

I simply do not understand ignoring the 1 position on the defense which would instantly make EVERYONE else on D better, especially the LBs and edge.

Great Player, fast motor, freak of a athlete. No need to compare him to anybody. He is ready to play.

At first, I too almost threw a shoe at my flat screen , when the Cowboys organization made the selection in round one. I thought another Bobby Carpenter. But after watching some YouTube videos, I’ve since have had a chance of heart. Imho, another Lee Roy Jordan, from the Cowboys team of the 60’s and early 70’s, who happens to be inducted into the the Cowboys ROH. Jordan also wore # 55. Look up some old footage of Lee Roy Jordan, who wasn’t half the size of Vander Esch, but had the instincts, in the run, and passing game, and for a linebacker position back in the day was ahead of his time, in Coach Landry’s Flex defense .
Vander Esch, has the potential to become a bigger version of Lee Roy Jordan, who by the way, was the Cowboys number one selection in 1963, from Alabama, under Coach “Bear” Bryant. He was the perfect selection by the master guru Gil Brandt .

History repeating itself, once again. Imho, expect great things from this selection, by 2020, he’ll be the man, replacing Sean Lee in calling defensive signals, if not before, for the Cowboys. Just my two cents worth.