If you watched tonight's preseason opener to see the Cowboys win, you came away disappointed. But if you were just wanting to see early positives from key players, you didn't mind watching Dallas give up 14 points in the 4th quarter and fall late to the San Francisco 49ers.

Most of the players who gave up that 20-10 lead won't make Dallas' 53-man roster this year. Rather, it was the crew who had the Cowboys up 14-0 in the 2nd quarter that will comprise most of our 2018 squad.

Quarterback Dak Prescott only saw one series in tonight's game, and QB1 was a perfect 3-for-3 for 39 yards and a touchdown strike to rookie Michael Gallup. Dak also had a 12-yard run to convert a 3rd down and keep the opening drive alive.

Gallup's 30-yard touchdown catch was his only one of the night, but it was a great start to his Cowboys career. The third-round pick left his man in the rear view as Prescott dropped the ball in perfectly to put Dallas up early.

On defense, franchised stud DeMarcus Lawrence was disruptive early despite not registering a sack. Solid play all around from the Cowboys' first and second-team defenders kept the 49ers scoreless until just before halftime.

The Cowboys will return to Oxnard, CA to resume training camp until their next preseason game; Saturday, August 18th in Dallas against the Cincinnati Bengals. 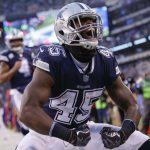 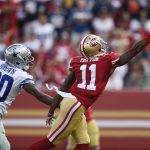