The 2020 season is here and the excitement around the Dallas Cowboys is high, as it usually is. This year a stacked offense, a new head coach and a lot of new additions to the defense have reinvigorated Super Bowl aspirations across Cowboys Nation.

The excitement should be warranted. With plenty of current and former Pro Bowl-level players on this roster, it’s easy to get caught up and have huge expectations.

But when expectations grow, so do questions. Do they have too many mouths to feed? Whose numbers will this hurt? Can certain players still produce like they used to?

It’s fair to ask these since there have been too many instances where a player under-performs or regresses from their prime. In the Cowboys case, it’s an all-too-often occurrence.

Barring injuries, we can look at a player’s history, game trends and other schematics to predict how well a lot of players will perform. The Cowboys are no exception. 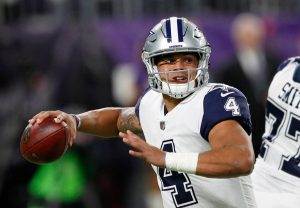 Dak Prescott has been among the league leaders in QBR every year that he’s been in the league. It’s because he’s among the more accurate quarterbacks in the league, his ability to extend plays and his low turnover rate (that are his fault).

He’s never had an issue throwing mostly accurate passes and should still have a good completion percentage as he does. The real focus will be on his yards passing, touchdowns thrown, his rushing numbers and the number of interceptions he’ll throw; all areas that he’s had a level of consistency and growth in.

There’s no reason to think that his passing numbers shouldn’t increase after going from Randall Cobb to CeeDee Lamb in the slot, and from Jason Witten to Blake Jarwin at tight end. Two players who will give Prescott even more yards thanks to their ability to gain yards after the catch as opposed to who they replaced, especially with Mike McCarthy and Kellen Moore. 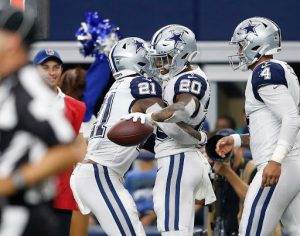 Ezekiel Elliott is the unquestioned number-one running back on the team and among the elite in the game. While he’ll see the bulk of the carries, second year Tony Pollard showed enough last year to prove he’s not going to just sit on the sidelines and watch.

Both of these players are going to get their carries, Elliott the bulk, but the receiving game is where they’ll both be just as important as the other. With Elliott’s ability to catch out of the backfield and Pollards ability to catch from both the back field and in the slot as an extra receiver.

Ezekiel Elliott ran for less yards last year than the previous season but had the most rushing touchdowns (12) since his rookie season. His career rushing yards per game is 96.5 and calculated for a 16 game season means another 1,000+ yard season.

Tony Pollard is not a full-time starter but will factor enough into the offense to have an impact. He complied 562 total yards and three total touchdowns. In year two, expect a jump in snaps as both a running back and receiver. His position flexibility makes him one of the teams more dangerous weapons that no ones taking about. 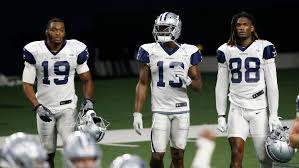 Amari Cooper will likely have the most targets and receptions on the team. He and Dak Prescott have built a connection over the last two seasons that’s among the best in the league. Even with the presence of rookie CeeDee Lamb, Cooper is still one of the leagues best for a reason.

Speaking of CeeDee Lamb, the highly coveted rookie receiver has already made headway in training camp. Catching everything thrown at him and developing solid chemistry with Prescott early on. Having him play his rookie year in the slot is only going to give him constant mismatches on opposing defenses.

Michael Gallup is still the forgotten man. He quietly had an 1,100 yard season in 2019 and there’s no reason why he should have another 1,000+ yard campaign in 2020. Despite being the ‘other’ receiver on the team, he’s just as much if not a bigger threat in deep passes with his skills to go up and catch the ball as well as his ability to break tackles. 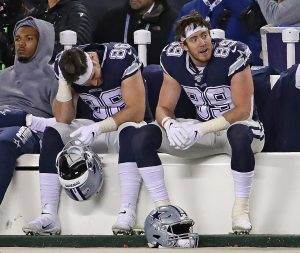 With Jason Witten gone, it’s Blake “Giant Killer” Jarwin’s show. The third-year tight end was given a vote of confidence by the front office by not resigning long time Cowboys vet, Jason Witten, and giving him a four-year $22 million contract.

Now that it’s his show, he will be Dak Prescott’s security blanket. His career 75% catch percentage and almost 12 yards per reception (four more than Witten) means he’s not just going to catch the ball but he’ll make plenty of plays after the catch as well.

Another beneficiary of Witten’s departure is fellow third year tight end, Dalton Schultz. His rookie season saw a bit of promise as he was a solid blocker in the run game and, despite not being asked to be a receiver as often, had reliable hands in the passing game.

Now he’s the teams tight end two and will also lineup as fullback, as per David Helman. In his third season the team knows how skilled of a blocker Schultz is but they want to know if he can be just as reliable in the passing game. With the different spots they’re going to play him, he’s definitely going to get his looks.

Aside from Jarwin and Schultz, the remaining tight ends will unlikely be factoring in the passing game. Blake Bell is primarily a blocking tight end who only averages seven catches a season. Sean McKeon is an undrafted free agent out of Michigan. His upside is similar to Blake Jarwin’s when he came out of college but he likely won’t be suited up on game days barring injury. 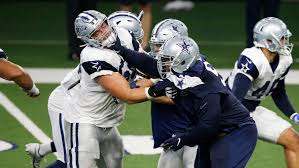 There’s been a massive reload this offseason on the defensive line. After losing Robert Quinn and Maliek Collins in the offseason, the main focus was not only to fill the holes but to have a supreme amount of depth.

Signing Aldon Smith, Everson Griffen, Dontari Poe and Gerald McCoy (before losing him to and ACL tear), and drafting Neville Gallimore and Bradley Anae all have gone along way in improving the depth and quality of their front four.

Griffen and Lawrence are likely going to be the sack leaders on the team. Both have averaged over nine sacks over the last three seasons.

Trysten Hill and Dontari Poe will start on the inside with Neville Gallimore, Tyrone Crawford and Antwaun Woods rotating in. Poe and Hill won’t be sack monsters but should aid in the running game. Given Hill’s lackluster rookie season, him starting should also be a good sign of things to come. However, we should still temper expectations in year two.

Unfortunately, the team won’t have Sean Lee for the first three games of the season. The good news is that they still have a pair of Pro Bowl linebackers in Jaylon Smith and Leighton Vander Esch.

The surprise? Aldon Smith is going to be the teams starting SAM linebacker. He’ll still rush the passer plenty but it’s come as a shock that in his first season since 2015 he’s starting and as a standup linebacker. Reports from camp have lauded his performance and we’re about to see just how good he looks.

We know both how good and how poor we can expect both Jaylon Smith and Leighton Vander Esch to be. Two seasons ago, they were a match made in heaven. Last year, Jaylon Smith had a better statistical year but was exposed as the teams MIKE linebacker, having to play because of Vander Esch’s injury.

Despite his injury, he hadn’t looked as sharp of a tackler that we saw the previous season. Smith and Vander Esch each played out of position and the defense didn’t play up to where it could’ve been. Now that they’ve switched (Smith to WILL, Vander Esch to MIKE) to where they can play to their strengths, we should see more of the All-Pro linebackers that we expect.

The portion of the defense that got the biggest makeover was the secondary. It’s also the biggest question mark on the team. They lost their best player in Byron Jones, safety is still a question and a rookie is their new number one corner.

With Trevon Diggs emerging as the teams number one corner out of camp, fans should be both excited and cautious in their optimism. In college he was a ball hawk-type of corner with four interceptions and 17 pass breakups in two seasons as a starter. With Diggs, he’ll likely have the best chance to lead the team in interceptions but he’s going to get picked on plenty for being a rookie.

Anthony Brown is often the forgotten man in the nickel but has been one of their best corners, year in and year out, which is why the Cowboys rewarded him with a contract extension in the offseason. In today’s NFL, where more and more teams are utilizing the slot receiver as pivotal role in the offense, having someone who can cover the inside is important. It might not show up on the stat sheets but we can expect another good season from Brown.

Chidobe Awuzie won’t be the main corner this season, as some had suspected he might but that could work in his favor. He was picked on a lot last year mostly because teams didn’t want to throw at Byron Jones. Teams will likely focus on picking on the rookie opposite of him. He might not be a Pro Bowl corner but Awuzie could be set up for a bounce back season by way of getting picked on less.

Finally we’ve come to the safety position. It’s a position that the Cowboys time and time again continue to ignore as a priority. Xavier Woods is an above average starter and has been the teams one constant bright spot at the position for some time but the team has missed that dominant presence back there. He’s going to have a good season but maybe not at an elite level people would want.

Darian Thompson has good enough of a camp to not only take the starting job but to be good enough to have former Pro Bowl safety, Haha Clinton-Dix released. Don’t expect too much in the way of turnovers but not giving up as many touchdowns would be a nice improvement.

Shane Carterhttps://dawgpounddaily.com/author/scarter1/
Lifelong Cowboys fan, who doesn’t mind telling the harsh truth. I’ve got a Bachelors Degree in Electronic Media and Communications from Texas Tech University. I welcome all opinions but I will shut down any troll.
Previous article
Would The Cowboys Consider Safety Eric Reid?
Next article
Cowboys-Rams Game Could be Delayed, Relocated due to California Fires

I wish you could hv predicted Earl Thomas production bc I do believe he will be apart of this team starting Week 2.