Through consecutive losses at Kansas City and on Thanksgiving to the Raiders, part of a larger skid that saw the Cowboys drop three out of four, Dallas never slipped out of first place in the NFC East. With four of their remaining five opponents being division rivals, this makes it easier to look past some of the similar miscues that allowed a depleted Saints team to stay in Thursday night's game. The Cowboys are of course hopeful their 27-17 road win can be the start of another streak, but fan reactions coming out of the win were far less optimistic.

For as beat up as the Saints were, losing their last four coming into Thursday, the Cowboys were without Mike McCarthy and several other coaches on both sides of the ball due to COVID-19 protocols. This made preparation for the Cowboys third game since November 21st all the more difficult.

Dan Quinn acted in McCarthy's role as head coach while continuing to call the Cowboys defense. At times this game reflected the hard-nosed defense paired with a steady ground game that Quinn would be comfortable with, but in other moments Dak Prescott showed flashes of the MVP level he played at much earlier this season. It was the Cowboys defense that sealed the game with four interceptions, three of which came in the fourth quarter and one going for a score with Carlos Watkins. 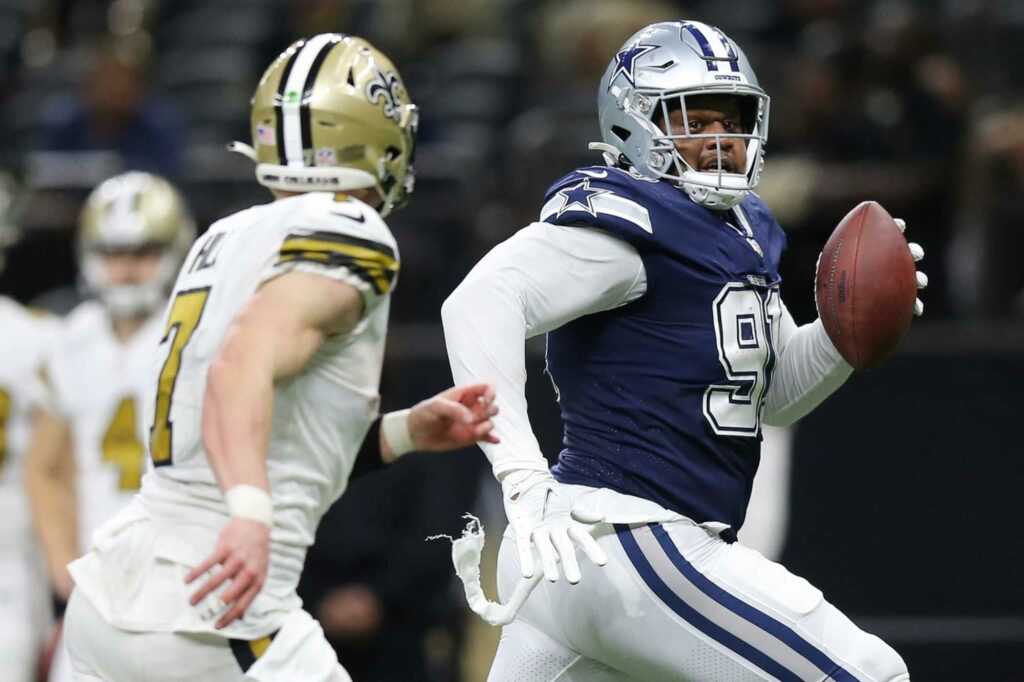 Win or lose, the Cowboys would have come out of this game insisting there is major room for improvement. That Kellen Moore's offense has an unreached ceiling to find, or promised impact players back from injury on defense are going to elevate Quinn's group even more. Losing to a sub-500 New Orleans team to drop three in a row would be cause for legitimate panic however, and Dallas can at least feel good they won by ten without again showing their best performance.

Here as always are a few of my takeaways from the Cowboys' fourth primetime game of the season, with one more to come on Sunday Night Football vs. Washington in week 16.

The Cowboys best defensive front against the run includes rookie Osa Odighizuwa. DeMarcus Lawrence played 37 snaps in his first action since week one, and many of them came lined up next to Odighizuwa. His most natural position may be as a 3T, but Odighizuwa has used his rush ability to be a force against the run. The Cowboys are thin at 1T ever since losing Brent Urban for the season, but are getting even more help at interior pass rush with Neville Gallimore returning as early as this week.

The best way for Odighizuwa to stay on the field with both Lawrence and Gallimore is making plays like he did on the opening drive, sniffing out a screen pass and ranging to the sideline for a big tackle that forced a Saints punt.

Much later in the game, on Watkins' pick-six, the Cowboys were caught substituting and lined up against Taysom Hill with Watkins, Tarell Basham, and Quinton Bohanna on the line. This is another strong group to play against the run, while Quinn can still create pressure with Micah Parsons or Randy Gregory (expected back from injury at Washington).

Of all the throws to second guess from Dak Prescott in this game, the fourth down miss to CeeDee Lamb was not one of them. The Cowboys second drive ended on downs when Prescott threw behind a streaking Lamb on fourth and short. Lamb ran into the space that Dalton Schultz was clearing out on the play, before quickly cutting up field. Prescott read the play right to lead Lamb into the vacated middle of the field, but the pass ended up behind as Lamb kept his route on the seam. 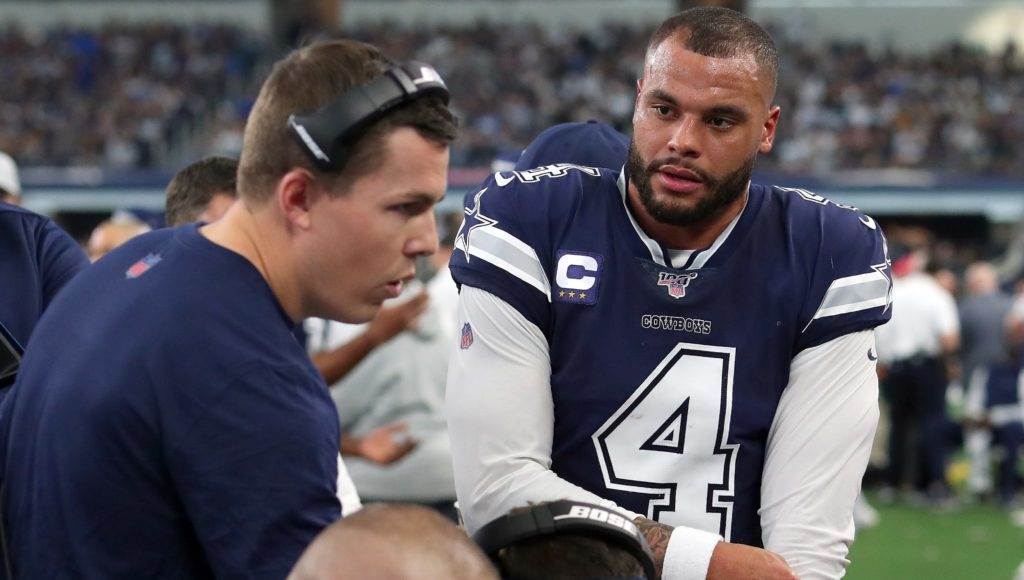 The Cowboys may have relied more heavily on their quick game without the OL coaching staff in place to prepare for a tough Saints defense, while also looking to include Amari Cooper back into the timing of this offense. The result was an inconsistent game from Prescott, though he made up for it with plenty of clutch throws into coverage when it mattered.

Another example of how the box score doesn't tell the story of how Prescott played is Marshon Lattimore's interception. One play before this forced throw, Moore called a one-read slant pass against Lattimore with a hobbled Ezekiel Elliott. It was one of the most questionable calls of the game for Moore, creating an easy deflection for Lattimore who caught the next ball thrown his way.

Dan Quinn is not going to shy away from playing aggressive man coverage despite giving up big plays, but it was a soft coverage on third down that helped create the Saints' tying score in the second quarter. Lil'Jordan Humphrey found himself wide open after Trevon Diggs and Anthony Brown ran into each other on a pick, leveling the game at seven on Hill's fifth longest completion of the night. The Saints relied on Hill's rushing ability to move the ball consistently, and he converted a key third down on this drive by scrambling for nine yards on third-and-eight.

Dallas was in a softer coverage on this play, leaving nobody in the flat to contain Hill. Once Parsons was drawn to the strong side of the field, Hill had a clear path to the sideline.

Another situation Quinn must be prepared for the rest of the season is opposing offenses targeting Leighton Vander Esch in their passing attack. The Saints called high-percentage throws for Hill that put Vander Esch in space, many of which went for explosive plays.

No matter where Parsons lines up right now, as the Cowboys play without Gregory, teams are expecting him to rush. This makes it far too easy to single out Vander Esch and negate the pass rush by attacking a player that's struggling to move laterally or get off blocks. When Parsons was in coverage, he helped create the Cowboys' first interception on a tip drill that Jayron Kearse secured while sliding out of bounds.

Your best pass rusher casually carrying a vertical route and making a play on the ball, leading to Kearse's INT.

We're already out of great things to say about Micah Parsons. What an unreal player. pic.twitter.com/flRpBbRnhb

Tony Pollard's career long 58-yard touchdown was a vintage play from the Cowboys offensive line, as well as Malik Turner. The Cowboys run game has been frustrating to watch at times during this recent stretch, with a lack of timing, continuity up front, and finishing ability from the backs to blame. None of this was an issue on Pollard's home run, as the Cowboys got Tyler Biadasz and Connor McGovern in space on the edge.

When the Cowboys OL was solely regarded as the best in the NFL, it was their ability to get out and play on the second level with ease that made this offense work. Kellen Moore still wants this to be a big part of his scheme, but has seen a different starting lineup in nearly every game this season. The timing worked to perfection with Biadasz and McGovern to spring Pollard though, with WR Malik Turner throwing a crucial block as well.

Between his tenaciousness as a blocker and flashes in the passing game, Turner has earned snaps with Cooper and Lamb missing time. This play was also a great sign for McGovern, who the Cowboys view as a more physical and technically sound replacement to Connor Williams. McGovern looked plenty quick and athletic making this play, as he continues to take hold of the starting left guard spot.

The Cowboys still have both meetings with last year's NFC East champion Washington Football Team if they want to claim this division. Washington has hardly lived up to lofty expectations this season, and the Cowboys own goals reach far beyond the division, but at 5-6 WFT is in the NFC playoff field and deserves respect.

This week-to-week approach, as the Cowboys get healthy and enjoy the three extra days of rest, is exactly what's needed for a team being put under such an intense microscope with every kickoff now. Thursday's win against the Saints wasn't pretty, and games against Washington rarely are either, but both games look to go a long way in putting the Cowboys back in the playoffs.

The Saints did come into this week's game with previous wins against the current second and third seeds in the NFC, the Packers and Buccaneers. The Cowboys are chasing both teams as well as the top-seeded Cardinals for the prestigious single bye week, while at the same time being reminded that not even games you're “expected to win” come easy at this stage of the season.

My biggest worry heading into the last five games of the season is the play of the offensive line. They had a hard time keeping the Saints out of Dak’s face, and opening holes for the run.

I think that if the same O-line players play together every week instead of mix and match they will all get in synch and play much better together to close out the season. 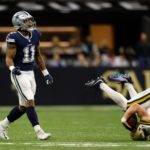 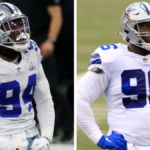