The news of the Dallas Cowboys trading for Tavon Austin at the NFL Draft was overshadowed at the time by everything else going on around AT&T Stadium. Leaving the draft with Austin in the fold and Ryan Switzer departed for the Raiders though, Austin has been constantly discussed as a possible replacement to Switzer and then some.

The Cowboys and Offensive Coordinator Scott Linehan envision a big role for Austin, but can’t pigeonhole this production into one spot on the depth chart. Cowboys Nation has heard so far this offseason that Austin is a running back (further crowding a talented backfield), wide receiver, and at points just a “play maker”.

For as much play making ability as the Cowboys have at running back with Ezekiel Elliott, they lack proven ability at wide receiver. Austin caught just 13 balls last season in Sean McVay’s LA Rams offense, but added 59 carries for 270 yards.

Six of these carries and 48 rushing yards for Austin came against the Cowboys in a week four win for the Rams. Austin broke down a reverse play from this game for his new team’s website, which you can watch with Staff Writer Nick Eatman right here.

As Austin describes his mentality in carrying the ball, he says “green means go,” referring to his talent in the open field. This should be music to the ears of everyone inside The Star. 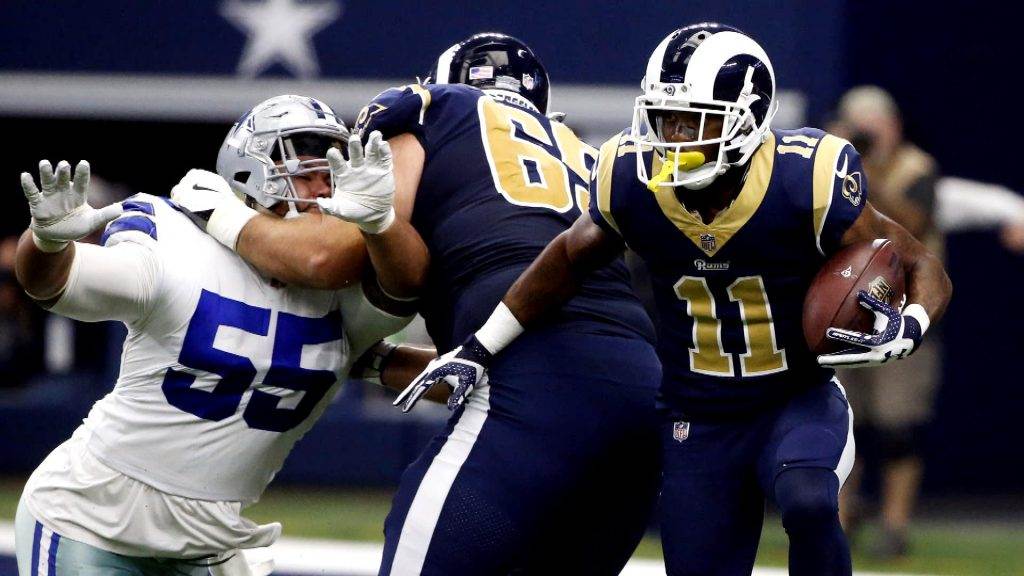 Sure, retired Tight End Jason Witten leaves behind just three such plays and free agent Wide Receiver Dez Bryant ten, but being led to believe that this is a better Cowboys offense without both centerpieces is a tall order.

The Cowboys commitment to becoming more dynamic and (*sigh*) “Dak-friendly” is much easier to believe when framed around Tavon Austin. While he won’t be the only Cowboys receiver running around in Oxnard trying to make this team, he’s one of the only ones that’s done it before.

Where potential is the trait to look for in big plays from rookies Michael Gallup and Cedrick Wilson, we’ve seen Tavon Austin in open space — or as he puts it, green grass. With Zeke Elliott being the only other player the Cowboys can truly say the same about, I have no choice but to believe they’ll have a good use for Austin.

This is a player they were willing to give up assets for, and one that an offensive coordinator still feeling pressure from last year’s debacle wanted here as part of the solution. The answer to how the Cowboys put Austin in position to make big plays for them is one that can only be answered through training camp and the preseason.

As we anxiously await both events coming on the NFL calendar later this month, the Cowboys will also be relying on other players to both meet and exceed expectations to make this revamped offense work.

When the dust from a fierce competition at RB and WR settles for the Cowboys, Tavon Austin will have earned his roster spot as a reliable option for Prescott to turn to — whether this is in handing him the ball, faking it to him, or targeting Austin in the passing game.

Tell us what you think about “Tavon Austin: “Green Means Go” for Cowboys Newest Play Maker” in the comments below. You can also email me at Sean.Martin@InsideTheStar.com, or Tweet to me at @SeanMartinNFL!