The Dallas Cowboys Are Legit Contenders

In just a few weeks, the Dallas Cowboys went from being a 3-5 team to a 7-5 division leader that has recently beaten arguably the best team in the NFL. Dallas was a 7 point underdog last Thursday against the New Orleans Saints, a game in which no one gave them a chance at winning. But they did. And just like that, perception surrounding such a controversial team has changed.

Now, the question is not whether or not the Cowboys will make the playoffs and play January football, but rather, are they legit contenders in a dangerous NFC?

At first, one can be quick to dismiss such a statement. The Dallas Cowboys, contenders? Sounds crazy, right? After all, it's the same team that only had three victories through nine weeks of football. The same team that continues to struggle on offense with inconsistent quarterback play and play-calling.

But make no mistake about it. The Dallas Cowboys are legit contenders in the NFL.

They're far from being Super Bowl favorites, of course. Don't get me wrong, I'm not saying they are the best team in the league. But they did just beat the best team. Not only that, but they held the #1 scoring offense to 10 points and 176 total yards.

Despite all of the criticism Jason Garrett receives, it's clear that the players do believe in him as the the head coach. You don't win this way against such a strong team without players who believe in their coach. And a win like this can change a football team midseason.

Jerry Jones: “This team won’t be the same again. I’m serious. You win something like this against…a caliber of team like that…the mirror knows you’ve done it, you change. This is a changer in here. These guys, they’re different cats now as they go forward.”

Clearly, the defense is worthy of playing on Super Sunday. That much has been confirmed after last Thursday's game. We had seen this defense dominate against other teams, and they continued to do so against the high-powered Saints' offense. One led by MVP candidate Drew Brees.

The defense is allowing 18.6 points per game. Leighton Vander Esch and Jaylon Smith are playing better than any other linebacker duo in the league. Byron Jones is shutting down one half of the field gameday after gameday. As impressive as the Cowboys' win over the Saints was, don't forget that for the defense, it wasn't a one game accomplishment. It's been consistent performances every week.

The offense is another story, though. Dallas ranks 24th in scoring offense and continues to be inconsistent in the passing game. Not to mention play-calling has been far from ideal for the Cowboys in many occasions this season. 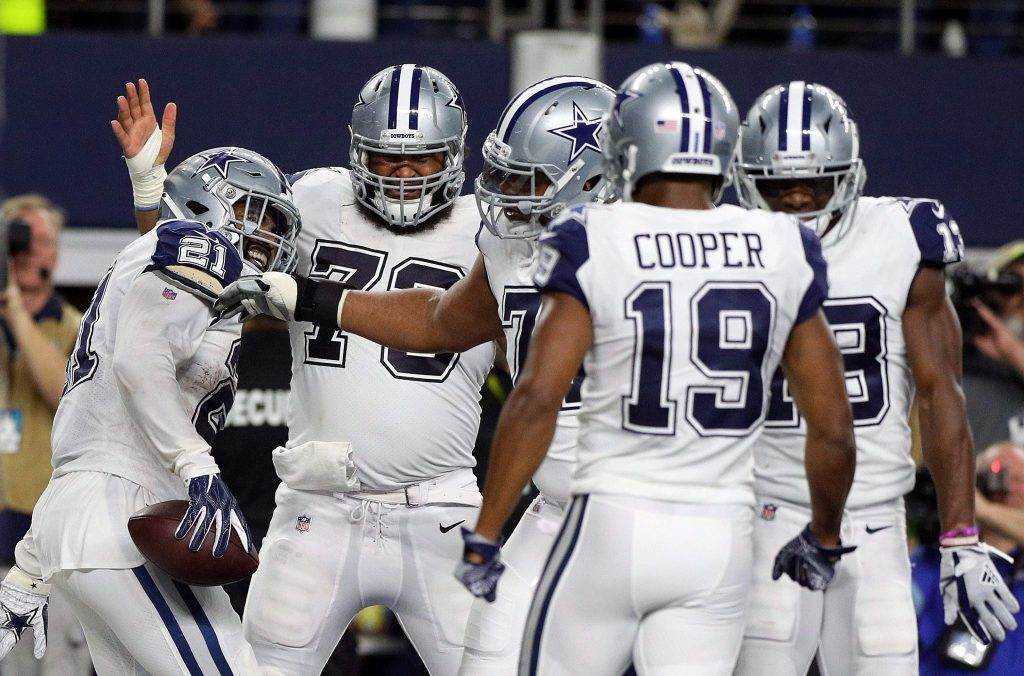 But there's actual signs of improvement. Since Amari Cooper's arrival, the passing game has notably improved. Cooper has been responsible for many first down catches in key moments and has opened up receivers like Michael Gallup as well as the running game for Ezekiel Elliott.

This is a unit capable of controlling the time of possession. A team that can efficiently run the football, averaging 132 yards per game (sixth in the NFL). If the Cowboys are able to improve in red zone efficiency, this team could be scoring over 20 points per game.

With this defense and controlling the time of possession, 24 or 28 points should get you wins. The Cowboys are an uncomfortable opponent, and they just proved the league that they can beat any team in the NFL.

Yes, it does sound crazy. But that team that beat the Saints earlier this week showed us why they should be in the conversation. The Cowboys started the year with their left foot, but they're simply not the same team they were then. Since then, they fired their OL coach and watched the unit dramatically improve. They got a true #1 receiver. And their first-round rookie linebacker has improved weekly. This team? This team is for real.

It's a long shot, but the Dallas Cowboys are legit contenders in the 2018 NFL season.

Mauricio Rodriguezhttps://www.facebook.com/PrimeroCowboys/
I love to write, I love football and I love the Dallas Cowboys. I've been rooting for America's team all the way from Mexico ever since I can remember. If you want to talk football, I'm in... You'll find me at @MauNFL.
Previous article
Is It Time for Cowboys to Return to Connor Williams at Left Guard?
Next article
Should Cowboys Address TE Injuries and Inexperience With This FA?

When it Mattered Most, Cowboys Offensive Line Protected Dak Prescott

Throughout the 2018 NFL season, one of the major story lines surrounding the Dallas Cowboys was how frequently Dak Prescott was taking sacks. It's...
Read more
Game Notes

The Good, the Bad, and the Ugly From Cowboys Divisional Round Loss

Well Cowboys Nation, the Dallas Cowboys 2018 season had to come to an end at some point. Not many of us would have predicted...
Read more
Cowboys News

Either the Dallas Cowboys or Philadelphia Eagles getting a win this week in the Divisional Round would be considered an upset. The Los Angeles...
Read more

Maybe in the conversation, but and this is coming from a DIEHARD Dallas fan I feel that out defense is top 5 and with the additions off Irving,Lee will only increase the chaos for opposing offenses. However our offense isn’t there yet and I feel that they continue to have ups and downs for that reason we aren’t ready just yet! We are getting there but we NEED to have more consistent play from Dak and our offensive line! The line is doing awesome considering there only 2 starters playing and if we can get all that to line up your right M. Rodriguez 20/24 points a game and we can win most Sundays!!!

The Dallas Cowboys defense may be the best in the league. Those players and coaches are certainly the reason the team is winning. The offense isn’t bad, in fact most of the players are doing a great job. However, Dak routinely misses simple throws and struggles getting past the first read even when the O-line holds solid. Once Beasley was his go-to guy. Now he misses him frequently. Whether anyone wants to admit it or not, Dak’s biggest strength is running the ball.

Equally limiting issues with the team include: 1) poor management of time-outs and the clock in general by J.G.; 2) Hit and miss offensive play calling; and 3) DAK NEEDS A REAL QB COACH!

I agree with you about Dak to a degree, but every QB misses some easy throws. I’ve seen quarterbacks just this weekend Miss easy throws who generally would make those throws. Dak miss one throw the gallop but let’s also remember he hit Gallup on a long throw as well. Tom Brady in the Minnesota game, Julian Edelman was open and instead of hitting them he threw an interception. It was an easy throw he just made a bad one. Don’t give me Tom Brady has Super Bowl wins which I know he does but point I’m making is that QB’s season QB’s still miss some easy throws.

Sure. Great QBs miss throws. Sometimes. But they don’t miss at the frequency of a mediocre qb like Dak. And they don’t struggle with basics like getting through reads when they’re not under duress. They don’t fail to position their feet before throwing on the move.

I’m a Dak fan. He is where he is in his development. We can’t blame him for that. We can blame J.G. for not giving him a real QB coach.

Please Read my post again! Wasn’t comparing Dak to brady at all. I just used Brady as a polished QB who will and has missed throws throughout his career. What’s not fair is you are expecting and comparing Dak to QB who have a longer tenure than him. 2 1/2 years in the league, I do expect him to get better with a real QB coach and an OC that plays to his strengths. Please read mu post again!

Also to call Dak mediocre is so premature. You’re talking about him missing throws, not planting his feet etc. Your comment insinuate he at his ceiling and he’s a finished product and WILL never improve. The guy has thrown for over 3,000 in every season he’s played in and Hall of famer Troy Aikman best year was a little over 3,500 yards. My point is stop condemning Dak, comparing him to accomplished QBS who didn’t come out of the QB matrix knowing everything firing on all cylinders! Tom Brady would tell you in his 2nd or 3rd year he was still developing in making proper reads and understanding defensive schemes. So was Brady, Brees, Rodgers, Rivers, Elite in their 2 or 3 year of playing? Probably not! Give our QB a chance to flourish like any other quarterbacks. Cowboys for life!