The Moment That Put the Dallas Cowboys in Limbo

2014 is the closest the Cowboys have been to becoming Super Bowl champions once again. That season unfortunately crumbled to pieces in the divisional round when Dallas lost at Lambeau Field in a game full of drama. We moved on to 2015, which was going to be their year but then injuries, especially Tony Romo's, left the Cowboys in a season of defeat.

After that, 2016 was supposed to be it. That was going to be the season in which finally, America's Team would return to glory and hold the Lombardi Trophy up in the sky. With 36-year-old Tony Romo and veterans like Sean Lee, Jason Witten and more nearing their final years in the NFL, the window was closing.

#9's comeback was bound to be epic. Sadly, he never had the chance to prove it.

Romo would take the field for the first time in a long time in Seattle during the third week of the preseason. And less than two minutes into the game, on a second down, Cliff Avril would bring him to the ground and crush every Cowboys fan's heart. 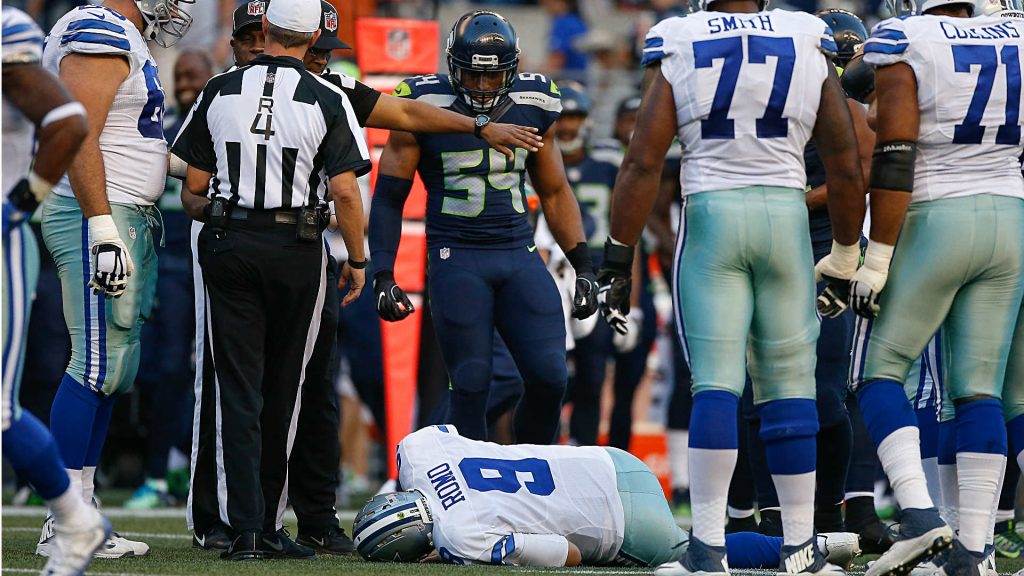 It didn't seem like much at first. Heck, there were even reports that he could've gone back into the field and it wasn't until the next day when the seriousness of his injury was announced. It was one of the most painful moments Cowboys Nation has had to endure in recent history.

Little did we know, that moment would change the Cowboys' path more than we imagined. Dak Prescott stole the starting job, led the team to the #1 seed in the NFC and was named Offensive Rookie of the Year.

Little did we know, that moment put the Dallas Cowboys in limbo.

When clubs are close to making a legit Super Bowl run, the offseason becomes primarily about adding key pieces that are missing in order to get the squad to the next level.

The Dallas Cowboys have had two great seasons in the last few years. One took place under the reigns of veterans Tony Romo and DeMarco Murray in 2014. The other, more recent one, happened when Dak Prescott and Ezekiel Elliott played their NFL rookie seasons in 2016.

The two campaigns share some similar aspects, when you think about it. Both years, Dallas had one of the most dominant rushing attacks in the league. Both seasons, the Cowboys fell short of the much-desired NFC Championship Game and both years featured gut-wrenching defeats against the Green Bay Packers.

But truth be told, 2016 wasn't meant to be played under Dak Prescott.

Let's go back in time, when the Cowboys' beloved quarterback Tony Romo went down in Philadelphia while playing the second week of the 2015 regular season. The season that was meant to be a revenge tour around the NFL after the Cowboys' 2014 campaign, was dead before the second game of the year was even over.

And so, 2015 became a year to forget for Cowboys Nation. Dallas would end up netting only two more wins, landing the 4th overall pick in the 2016 NFL Draft. 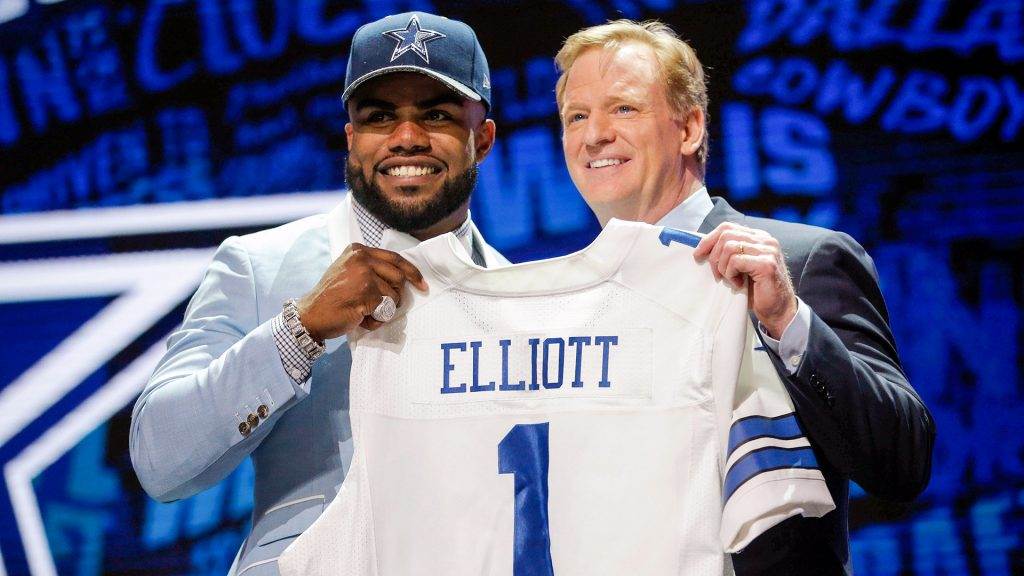 Which brings us to one of the hottest debates in Cowboys Nation to the date. The Ezekiel Elliott pick. When Dallas was on the clock a couple of years ago, the pick was going to come down to two possibilities. Running Back Ezekiel Elliott or Cornerback Jalen Ramsey.

We know who they drafted. Fans will forever argue whether it was the correct call or not, but they usually forget what that pick was all about. The Cowboys weren't Dak Prescott's team yet. It was Tony's team.

Drafting a premium running back like Zeke was meant to replicate the team's offensive success in 2014. Think about it, when DeMarco Murray had his career-best year, we saw Romo's best performance. Taking Zeke with the 4th overall pick would provide an even stronger running game during his final years playing football.

With Dez Bryant, Terrance Williams, Cole Beasley and Jason Witten, the Cowboys were built for a Super Bowl run. Perfect running attack behind the finest offensive line in the league paired with the ever-underrated passer.

2016, with Romo being back and healthy, was supposed to be the year for Dallas.

But it wasn't. Once he was sidelined, Dak Prescott stepped in and never handed the job back. Now, don't get me wrong. When I say the moment in which Romo was injured put the Cowboys in limbo, I don't mean letting Prescott continue as a starter was the wrong decision. 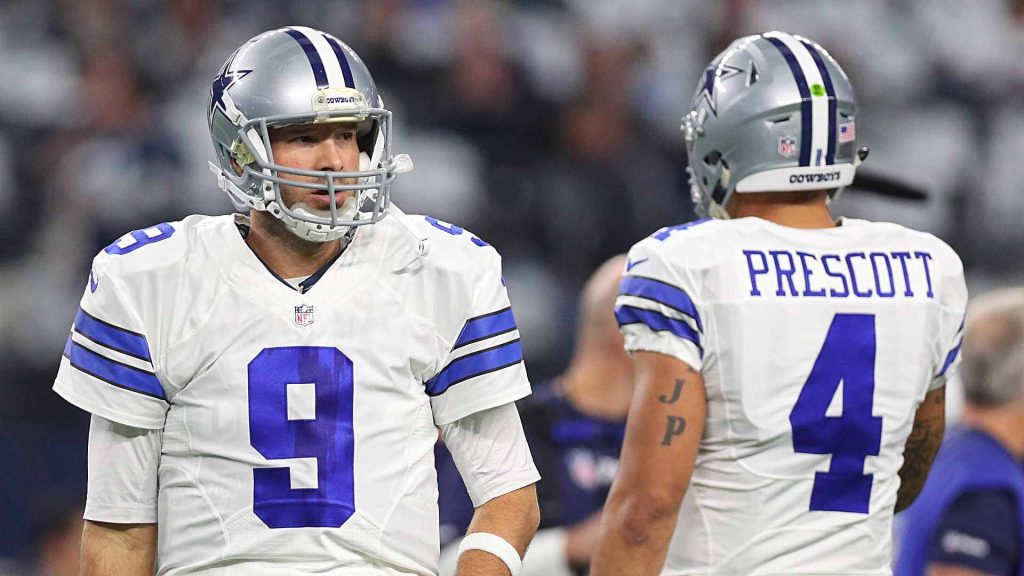 As much as I love Romo as a fan, playing Dak was the right call to make. But we can't deny that they're in a way, stuck between a “win-now mode” and a bit of a rebuilding mode. Not that the Cowboys are fully rebuilding, but they just let Dez Bryant go in their quest for a “Dak-friendly” offense.

Not to mention the veteran players who may not be playing next year or in two years. How long until Jason Witten and Sean Lee decide to hang up their cleats?

Heading into 2018, the Dallas Cowboys will try to “win now”, but they do have a lot young talent in different positions and could become a powerful team for some years. However, this could be the season in which they climb out of the limbo. The coaching staff's jobs probably depend on it. Even Dak will have something to prove in his third season in the pros.

There's a lot at stake for this Cowboys team in 2018. Hopefully, this time around, it ends up actually being their year.

Mauricio Rodriguezhttps://www.facebook.com/PrimeroCowboys/
I love to write, I love football and I love the Dallas Cowboys. I've been rooting for America's team all the way from Mexico ever since I can remember. If you want to talk football, I'm in... You'll find me at @MauNFL.
Previous article
3 Mock Drafts, 3 New Wide Receivers for Dallas Cowboys Following Bryant Release
Next article
Cowboys 2018 Draft Needs: Tight End

We were in limbo for ten years with Romo. Romo didn’t even see the field in his first two years but people are talking about this is a make or break year for Dak. Idiots.

I’m not sure my usage of “in limbo” in this post was understood. Thanks for reading.

It was actually 3 years on the bench and he almost got cut from the team in favor of some guy named Clint Stoerner at the bottom of the depth chart.

Should have let Romo comeback and play in 2016 and let Prescott learn some more but what’s done is done no changing that.

Imho, the Cowboys organization and coaching staff made right decision in the transition from Romo to Dak, in 2016. In regards to 2015, the Cowboys was rolling the dice on Romo, which came up snake eyes. 2015 brought to light the seriousness of Romo body failing him, two collarbone injuries, in addition, to the back issues, that it wouldn’t be long before Romo career would end.
Yet the Cowboys organization continued to roll the dice on Romo, fortunately, the Cowboys had Prescott in 2016, instead of what Cowboys nation suffered through the play of the quarterbacks the Cowboys put on the football field with below average results, during Romo’s absence in 2015.
Prescott was GOD send , as quite as it’s kept. Just my two cents worth.

I agree with you, and I say this as a fan whose second favorite Cowboy ever is Tony Romo