A loss is a loss. There are no moral victories in football, especially when your favorite team falls to 5-4 on the season and into a tie atop the NFC East (tiebreakers notwithstanding). Here we sit, however, in the middle of week 11 and the Dallas Cowboys will be fighting for their playoff lives every week from here till week 17. What could have been a one-game lead in the division was lost as the Dallas Cowboys allowed the Minnesota Vikings to come into AT&T Stadium Sunday night and steal a game on the road.

In the loss, the Dallas Cowboys coaching staff continued to play a familiar refrain as they “established the run” to the tune of 22 carries for 53 yards as a team, the longest run of the night coming from Tavon Austin on a reverse. The running game struggled the entire night as Mike Zimmer's defense beat the Dallas Cowboys offensive line and didn't allow Ezekiel Elliott any running room.

Because the running game was so bad, the Cowboys were forced to throw, and throw a lot. After getting down two touchdowns early in the game, Dak Prescott and the passing attack found their mojo and brought the game even before the Vikings scored on a last-second field goal to close the first half. In the second half, the teams traded leads before the Cowboys couldn't convert on 4th and 5 after having 2nd and 2 at the Vikings nine-yard line.

Though the game didn't end with another “W” being added to the win column, the Cowboys won a bit in another way. They saw their franchise quarterback thrive in a situation when the running game wasn't working. 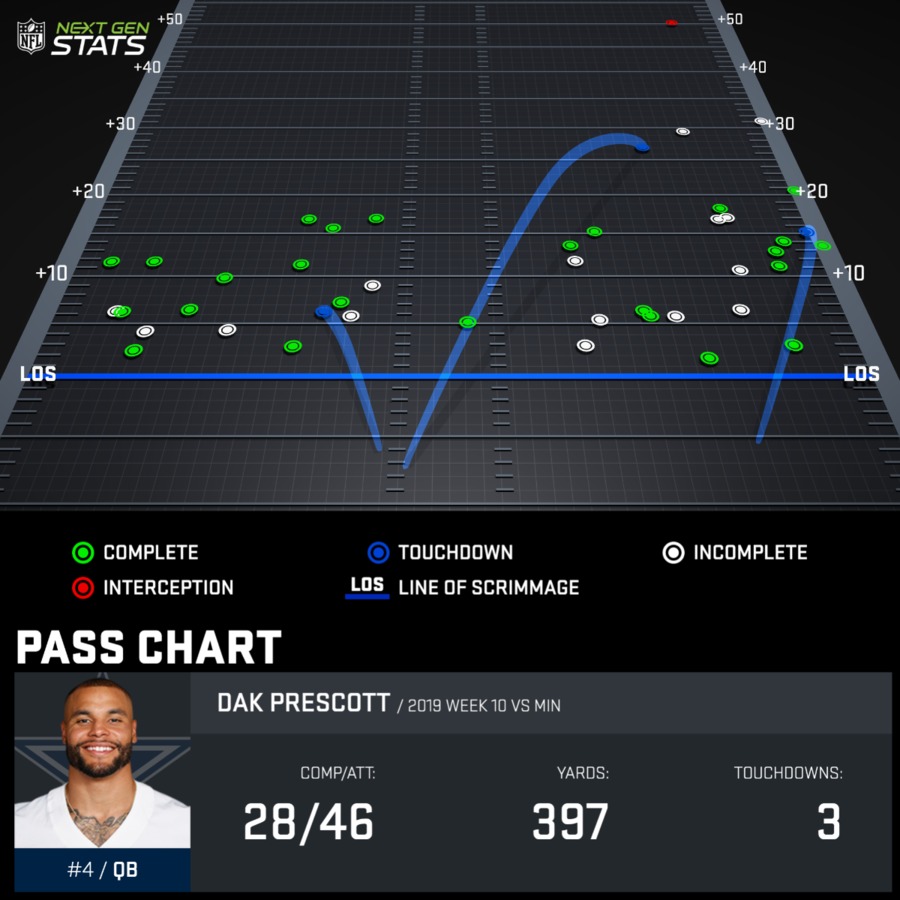 Prescott averaged 8.63 yards per attempt and completed an insane 17 passes that traveled 10 yards or more. For comparison, Kirk Cousins only completed two passes on the night on balls thrown at least 10 yards or more. Dak was slinging it on Sunday Night Football.

When situations get tough, Dak Prescott generally finds a way to rise to the occasion. In long, down and distance situations, Dak's been money all season when facing second and third and long and he was again on Sunday Night Football.

Time after time the running game put the offense in a hole and Dak dug his way out of it. It was incredible to watch him and the passing game work on third downs. From the 10-minute mark of the second quarter on, with Dallas trailing by 14, Prescott put the Cowboys on his back and led them to score on four straight possessions.

On their second to last drive, the Cowboys started with the ball at their own six-yard line and from there, Prescott completed passes of 20, 10, 13, and 20 yards to get them inside the Minnesota Vikings 30-yard line with a little more than two minutes to go. After a 2nd and 6 pass to Jason Witten for a first down and an eight-yard slant to Amari Cooper, the Cowboys were at the Vikings' nine-yard line with 2nd and 2 and about a minute and a half remaining.

On 2nd and 2 and 3rd and two, the Cowboys ran a couple of run-pass options (RPOs) and the Vikings played them perfectly. Ezekiel Elliott had nowhere to go and the Cowboys ended up turning it over on downs. On those two RPOs, Dak Prescott made the correct read by giving the ball, however the offensive line just didn't provide any push, which had the coaches watched the previous 58 minutes of the game, they would have seen that the running game was struggling to get anywhere.

They had to settle for a hail mary attempt at the end that went just out of the reach of Blake Jarwin.

It was an incredibly frustrating sequence to end that drive with about a minute left. Your quarterback who had done all of the heavy lifting to get you back in the game and keep you in the game, deserved a shot to win the game there. A run should have never been an option. He was in a zone from the second quarter on that had you given him a shot to throw there on 2nd and 2 from the nine-yard line, you have a better shot at picking up at least another first down.

When nothing was working and the Dallas Cowboys needed Dak Prescott to be great, he came through for them. Unfortunately, Prescott's bid to bring the Cowboys all the way back fell short, but that shouldn't take away from what was an excellent night for Dak and the passing game. If there was any question about who drives the offense before that week 10 matchup, the questions should be answered now. Dak Prescott is this team's MVP.