The NFL draft is less than a month away and the anticipation is at an all-time high in North Texas. The Dallas Cowboys, due to a disappointing 6-10 campaign in 2020, are in a position to add plenty of premium talent to their roster, especially on the defensive side of the ball.

With the loss of Chidobe Awuzie to free agency, and finishing 31st against the run last season, cornerback and defensive tackle are two positions high on the Cowboy's radar in the draft. ESPN's Todd McShay recently released his two-round Mock 4.0 and has the Cowboys adding two defensive studs from the SEC in South Carolina's Jaycee Horn and Alabama's Christian Barmore. 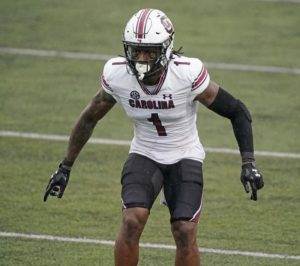 Horn is one of the top three corners in the draft along with Alabama's Patrick Surtain and Virginia Tech's Caleb Farley. He has the prototypical size of 6'1 and 205 pounds. Possess excellent ball skills that led to 23 pass breakups during his days with the Gamecocks. Excels in man and off coverage while also providing support against the run. Uses his physicality to battle receivers through the catch point and does a great job covering crossing routes.

If Horn is the pick in the first round, the Cowboys would be getting another playmaker at corner to pair with 2020 second-round pick Trevon Diggs who led the team in interceptions (3) and pass breakups (14) despite missing four games with a broken foot.

Lowest in the SEC👀 pic.twitter.com/63cAi2TmI7

I wrote last month on how the Cowboys should consider Horn with the 10th pick and McShay is of the same mindset. The possibility of this duo being together is something to salivate over and would set the Cowboys up nicely at the corner position for the foreseeable future. 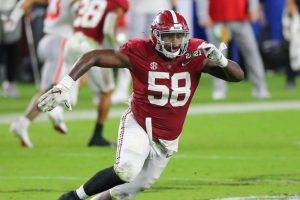 Barmore is a mountain of a man at 6'4 and 310 pounds. As a redshirt freshman, he registered 26 tackles, two sacks, and two pass breakups. He took it up a notch in his sophomore campaign with 37 tackles, eight sacks, three pass breakups, and three forced fumbles. He was named First-Team All-SEC in 2020 and was the Defensive MVP of Alabama's victory over Ohio State in the National Championship Game when he recorded five tackles and a sack.

Barmore is a 3-technique with power and is also very agile. His explosive first step gives him the necessary leverage he needs off the line of scrimmage. He possesses straight-line speed and does a great job pursuing plays as well.

Opted out of the vertical/broad jump

Alabama DT Christian Barmore had an absolutely dominant back half of the ‘20 season. Was the best player on the field for Bama down the stretch.

The Cowboys need an anchor on the interior of their defensive line to go along with Antwaun Woods, Neville Gallimore, Trysten Hill, and Brent Urban. Barmore's size and athleticism make him an interesting prospect and one the Cowboys should strongly consider if he's there when the 44th pick comes around.

Horn and Barmore are two very talented prospects and would instantly upgrade a Cowboys defense that was one of the NFL's worst in 2020.

Matthew Lenixhttps://mlenixsctx.wordpress.com/
I write dope stuff about the Dallas Cowboys and what not.
Previous articleS Richie Grant Would be a Day 2 Steal for the Cowboys
Next articleIf Sean Lee Chooses to Keep Playing, Will it be With Cowboys?

Out of all the 32 NFL teams, it's always an honor to be crowned the best defense. Now even though the season just started...
Read more
Cowboys News

While we've yet to see anyone in a real game this season, there are early signs from training camp, preseason, and other sources of...
Read more

Gallimore is also a 3-tech and a very similar player to Barmore, at least he was projected to be when he was drafted. A quick powerful penetrating DT. Why get a duplicate player unless they already gave up on Gallimore?

What we need is a behemoth strong run stuffer that can push the pocket, tie up blockers and engulf ball carries. He doesn’t need to get to the QB necessarily, just muddy the waters. Now the cowboys may see Barmore as capable of doing all these things AND get to the QB in which case he would be a good pick I guess. Then who comes off the bench Hill or Gallimore?

Enter McNeil, NT. PFF placed him as our pick in #2 in a recent draft. Even if they have to surrender a late pick to move to get this guy they should do it. He stuffs the run excellently and provides pocket push. In high school he play RB before adding his current weight. Let Hill and Gallimore determine if they are to be our 3-T. There are so many options at #10 to benefit the team, I not really concerned about that pick. McNeil in #2 would be perfect at a vast area of need on the team.

This would be a home run first 2 rounds ! Barmore will not be around at 44 tho …

I agree about the 10th pick. Only way we screw that up is by trading it for some low round picks instead of a #1 next yr or a 2nd & 3rd this yr. Anyway i believe we get Horn and then we are gonna have to allow the draft come to us at that point because of all the 1st Rnd slips and drama that goes on in a draft aka Collins. We should stay true to our board and pick best available and continue to break the 2nd round curse with a sound pick there and if we can get 2 Def studs in the 1st 2 picks then we will be a lot better this yr than last.