As excitement ramps up for tomorrow night's game between the Tampa Bay Buccaneers and the Dallas Cowboys, concern over potential missing players has also been on the rise. We now have the official Week 1 injury reports for both teams based on their final three days of practice.

After a few scares throughout the week, thankfully the home team will have most of its top players as they begin this 2022 campaign.

Perhaps the best news of the week came after a brief scare on Thursday regarding QB Dak Prescott. Issues with some new cleats caused some minor pain in his ankle, but Prescott is full-go for Sunday and did not have any injury designation after yesterday's practice.

Less certain is the status of the “QB of the defense,” Jayron Kearse. The veteran safety popped up yesterday with an unspecified neck issue, missing the practice session and now being seen as questionable for the season opener. Donovan Wilson would start in Kearse's absence, but Dallas would greatly miss Kearse as a defensive signal caller and leader.

After a few hollow teases from Jerry Jones and Mike McCarthy, WR Michael Gallup is officially out for the game as has always been expected. He was able to participate in practices this week to some degree, increasing optimism that he could return as soon as next Sunday or Week 3 at the latest.

With nearly all of Dallas' key players sitting out the three preseason games, tomorrow night will have some added sizzle for Cowboys Nation. Let's hope Prescott, Micah Parsons, and the rest of the gang are as ready for it as we are!

The only confirmed absence for Tampa is backup CB Zyon McCollum. The 5th-round rookie injured his hamstring three weeks ago and missed all practices this week for the Bucs. He was listed as a second-stringer on the team's depth chart, so a blow to their defensive depth.

The WR position has some issues with two of the top three, Gage and Godwin, both carrying injuries into the game. While the Bucs will still have Mike Evans and Julio Jones to lean on if needed, Godwin is one of Tom Brady's favorite targets and would be sorely missed.

If Brady does need some extra time to find less-familiar receivers, having RT Tritan Wirfs healthy is a big win. Wirfs was limited early in the week with an abdominal injury but has fully participated the last two days. Tampa is already hurting on the offensive line with C Ryan Jensen and G Aaron Stinnie both on injured reserve.

However, like the Cowboys and most other NFL teams in early September, Tampa is heading into Week 1 relatively healthy across the roster. Both teams have some weak spots to overcome, but neither has any glaring absence that should prevent this from being a competitive game. 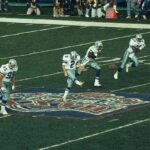