DeMarcus Lawrence was among the leagues best pass rushers a season ago for the Dallas Cowboys, producing 14.5 sacks to finish third in the league to Chandler Jones and Calais Campbell. With Campbell’s career output coming in his tenth season and Jones leading the league in sacks as a six-year veteran, Lawrence’s outburst in the final year of his rookie contract provides plenty of optimism for his future in Dallas — despite it being long-awaited from the Cowboys.

Lawrence will play under the franchise tag in 2018. The Cowboys are optimistic that a long-term deal will get done with their top pass rusher, but are more so asking Lawrence to prove that last season was no oddity before backing up the Brinks truck.

Feeling that he can only earn more money with a continued effort to put injuries behind him and live up to his draft status as the 34th overall pick, Lawrence can become the first Cowboys defender since 2010-11 to record double-digit sacks in consecutive seasons.

Of course, this sampling of future Hall of Fame Defensive End DeMarcus Ware’s career with the Cowboys is nothing too out of the ordinary. His rookie year being the only exception, Ware had at least 10 sacks every year in Dallas from 2006-2012. Ware lost this streak in 2013 in just 13 games for the Cowboys, signing with the Denver Broncos next season.

Just how well the Cowboys are going to handle high expectations with a very young roster seems to be this season’s most pressing question. The answer is both simple and helplessly complex. The Cowboys will be relying on any proven players to continue in their progression, most of which working with new position coaches.

DeMarcus Lawrence has to top this list for the Cowboys, as the rest of their talented defensive line will only fall into place should Lawrence be a consistent force from the strong side.

A complete player in 2017, Lawrence was a stunningly efficient pass rusher with elite technique to beat opposing right tackles with ease and get to the quarterback. These massive strides for a healthy Tank Lawrence are the biggest reason Rod Marinelli and the Cowboys can expect to field a stout defense in support of a patented ball control offense.

Covering the changes the Cowboys have made on offense is well beyond the scope of this article, but not lost to Lawrence and his camp seeking a new contract are the corresponding changes around Lawrence at both defensive tackle and end. 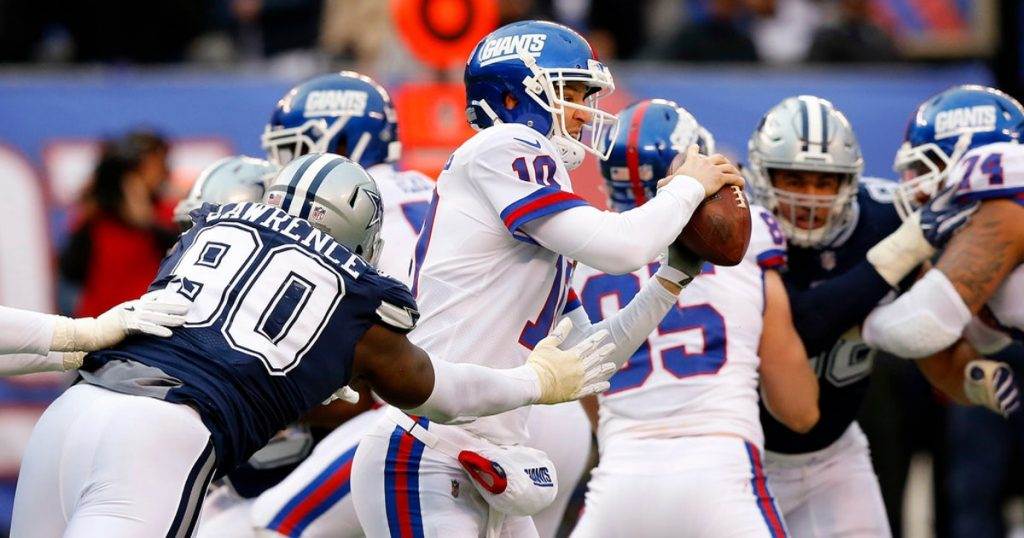 Lawrence himself spoke to the importance of the Cowboys 3T-DT position last season, a starting spot that belonged to Maliek Collins at the time. Seemingly long gone are these days though, as Collins finished the season as the Cowboys one technique and opened the door for David Irving to start alongside Lawrence.

With the Cowboys now preparing for Oxnard, they’ll be without Collins in any capacity for a while, as he deals with a second broken foot in three years. Irving is also starting 2018 with another four game suspension, turning the Cowboys depth at DT from a strength to an overall team weakness.

This cannot be an excuse for DeMarcus Lawrence, nor would he want it to be. There’s a reason the Cowboys have been noncommittal to Irving (with Collins still on his rookie contract), while already laying the groundwork for Lawrence to earn a lucrative deal next summer — at the latest.

As mentioned, the Cowboys sweeping changes across their coaching staff has already had a positive impact on the growth of several key players. With Defensive Coordinator Rod Marinelli specializing in DL play however, this is a group that remains unchanged from a coaching perspective.

Marinelli’s patented rotation with his front four has all the numbers it needs to deploy one of the best units the Cowboys have fielded in years. One player that shouldn’t be coming off the field much is DeMarcus Lawrence.

Whether or not this is a sack artist just getting started in the silver and blue or one that will reach his peak at an inopportune time is a defining question for the Cowboys in 2018. Missing the playoffs at 9-7 to effectively “waste” Lawrence’s dominant 2017 stretch could be all the fuel Tank needs to push on into another contract year, or yet another example of the Cowboys never quite putting it all together.

There were just three edge rushers drafted before DeMarcus Lawrence in 2014. Only fifth overall pick Khalil Mack has put up a better season that Lawrence’s 2017, following up 15 sacks in 2015 with 11 the following year and 10.5 last season.

The Cowboys drafting well is nothing new, and all indications is that they’re patience with Lawrence is about to be an example of this for year’s to come.

Tell us what you think about “What’s Next for Dallas Cowboys DE DeMarcus Lawrence in 2018?” in the comments below. You can also email me at Sean.Martin@InsideTheStar.com, or Tweet to me at @SeanMartinNFL!