The Cowboys don't know yet who they'll facing in the first round of the NFC playoffs. While the odds lean heavily in one direction, there are four possible wild card teams that could wind up coming to Dallas next week. How will the Week 18 regular-season finales impact the tournament bracket?

Odds are that either the Cardinals or the Rams will be next week's visitors. As we broke down yesterday, the Cowboys are nearly certain to be the 4th-seeded team in the NFC. That would mean facing the first runner-up in the NFC West; either Arizona or Los Angeles.

But as that article explains, Dallas still has slim chances of moving up to the 2nd or 3rd seeds depending on the Week 18 results. That opens up possibilities for the Philadelphia Eagles or San Francisco 49ers to become our first-round opponent.

The New Orleans Saints could still slip into the playoffs with a win (@ Falcons) and a loss by the Niners. But there's no scenario that could lead to the Saints playing the Cowboys next week.

Here are the current standings and tentative playoff seedings for the NFC:

So let's go through this team-by-team. What circumstances could lead to any of the 49ers, Cardinals, Eagles, or Rams playing the Cowboys in the wild card round?

If the NFC East rivals are going to meet again in the playoffs, it requires a Cowboys win and losses by Arizona, Los Angeles, and Tampa Bay in Week 18. Obviously, this isn't very likely.

The Eagles have clinched a wild card spot and will be either the 6th or 7th seed. Even if they lose to Dallas tomorrow night, they could still wind up as the 6th seed if the 49ers loses to the Rams and the Saints defeat the Falcons.

But for the Cowboys and Eagles to play each other in the first round, it would have to be in a 2nd vs 7th matchup. Dallas needs the 49ers to win to potentially move up to 2nd, which would automatically make Philly the 7th seed.

As listed above, a Cowboys-Eagles playoff game would also require losses by the Bucs and Cardinals in their Week 18 games. Dallas' head-to-head losses against Arizona and Tampa this year creates a lot of trouble for them with playoff tiebreakers, so they need a very specific set of circumstances now to move up to the 2nd seed.

So no, the Eagles probably aren't coming to town in the first round.

This scenario is slightly more probable; Dallas moves up to 3rd and faces the 49ers as the 6th seed. It allows for Tampa to win over Carolina, which knocks the Cowboys out of the 2nd seed, but still keeps us from having to face either the Cardinals or Rams in the wild card.

It's hard to imagine both Arizona and Los Angeles losing their Week 18 home games, especially with a division title still up for grabs. While the Rams-49ers game should be a good one as San Francisco is still fighting for its playoff spot, the Seahawks may not put up much of a fight against the Cardinals.

Outside of these specific outcomes, there's no other scenario that puts the 49ers and Cowboys together in the first round. If Dallas gets to the 3rd seed, they're definite hosting San Francisco. If they get to 2nd, they're definitely hosting the Eagles.

Pretty simple; unless both Arizona and Los Angeles lose this week, Dallas is the 4th seed. That means they're probably playing whoever doesn't win the NFC West.

The Rams and Cardinals split their two games against each other this year. Arizona is 4-1 in division games and Los Angeles is 3-2, so that's why the 11-5 Cardinals could still win the West over the 12-4 Rams.

Los Angeles controls its own destiny and that of a few other teams. If the Rams beat the 49ers on Sunday, it clinches the NFC West for them and locks the Cowboys and Cardinals into the 4th and 5th seeds.

If the Rams were to get upset by the Niners, Dallas and Arizona still have to win their games to take advantage. If all three teams lose in Week 18, it would still be Cowboys-Cardinals in the first round.

Again, that Rams-49ers game should be interesting. San Francisco could miss the playoffs completely if they lose so they'll be going all out. We can assume that Los Angeles would like to hang on to the 2nd seed and a second-round home game, so the effort should be there for them as well.

So as today and yesterday's articles establish, our Dallas Cowboys are probably going to be 4th seed in the 2021 NFC playoffs. Whether they're playing the Arizona Cardinals or Los Angeles Rams in the first round is less certain, but the odds right now are that we'll get a rematch from Week 17 with Kyler Murray and the Cardinals.

But we've come to expect the crazy in professional sports, and especially in a season with so many x-factors and unpredictable elements as this one's had.

If nothing else, we know the Cowboys are NFC East Champions and hosting a playoff game next week. While most Dallas fans have their sights set higher, don't forget to enjoy what's already been accomplished. 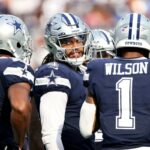