The Dallas Cowboys have selected Cornerback Kelvin Joseph with their 2nd-round pick, 44th overall, in the 2021 NFL Draft. Still just 20 years old, Joseph has spent the last two years at Kentucky after one year at LSU in 2018.

After watching Jaycee Horn and Patrick Surtain II come off the board just before their 1st-round pick, Dallas finally got the CB they needed with their first pick on Day 2.

This is the second-straight year that the Cowboys have used their 2nd-round pick at cornerback. Last year they added Trevon Diggs and are hoping he and Joseph will form a strong starting duo for years to come.

Welcome to the Cowboys, Kelvin Joseph!

I read something on Joseph that days he has all the tools to be a top corner. Love this pick!

I just read where he was a projected 4th rounder with potential to be a spot player. We were one pick too late on the safety we want every year. – MY.

4.3 speed and picked off a pass while covering Devonta Smith. Yes, please!

I hope he works out. Personally I am disappointed they allowed Trevon to get plucked right in front of them. What is the purpose of having all these extra picks if they aren’t going to use them to move up to grab a player like him?

Read the kid has the tools to be the best corner in the draft. The knock is he is impatIent in his technique and knocked heads with college coaches. Side gigs as a recording artist.

To miss out on the three top safeties in the draft, Holland, Grant and Moehrig is huge.
Cowboys should have been more aggressive in getting one of them by moving up in the second round by giving up some of their draft capital.
It really was inexcusable to not attempt to get one of these elite safeties.

Jane Slater reported that the Cowboys were going to pick Kelvin Joseph over Moehrig even if he didn’t get picked right before us.

The Cowboys just don’t seem to value Safety very highly. Also makes me wonder if they plan on moving Reggie Robinson II back to FS if something happens to Kazee.

Kelvin Joseph has the potential to be a elite corner in the NFL, he just has an attitude like he don’t care about football and that’s why he was pushed out of LSU and went to Kentucky!! And the coaches at Kentucky eventually told him to leave too cause he didn’t wanna try for them either!! But if it wasn’t for that he would have been a 1st round prospect this year!! And that’s one big reason why I don’t care much about this pick!! But I guess all we can do is hope he changes his ways now that he’s in the NFL!! 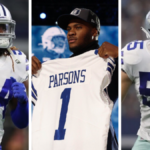 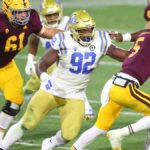