The Dallas Cowboys have used considerable draft resources at the cornerback position in recent years. That continued in 2021 with 2nd and 3rd-round picks going to CB, but we also saw a former 2nd-round pick go out the door in free agency. As we prepare for the upcoming season, does it feel like the Cowboys are better or worse at cornerback?

The 2nd-round pick in 2017, Chidobe Awuzie, played out his rookie contract and just took a free agent deal from the Cincinnati Bengals. While never an exceptional player, Awuzie was a solid starter and not easily replaced.

Dallas did re-sign another 2017 draftee, Jourdan Lewis, to go with returning players Trevon Diggs and Anthony Brown as a potential CB nucleus. But recognizing that more was needed, Dallas added two more corners in Day 2 of the 2021 Draft with Kelvin Joseph and Nahshon Wright.

Joseph and Wright's arrivals make this a very interesting group to watch in camp and preseason. We're already fairly convinced that Diggs, last year's 2nd-rounder, has the makings of an exceptional NFL cornerback. And Lewis and Brown, while never great, have had their moments.

Joseph scouts a lot like Awuzie; a zone CB who isn't afraid to tackle but struggles in man. We'd love him to hit the ground running and immediately contribute as a top-three corner, but at least Brown and Lewis are here to provide some insurance against rookie development.

Wright was one of the more surprising picks of the 2021 Draft, perceived as being a major reach for where Dallas took him, But if early indications mean anything, Nahshon has been a standout of the recent minicamps and will hopefully keep proving the scouts right once we get to Oxnard and beyond.

We're still waiting for anyone, including Trevon Diggs, to replace the void that Byron Jones left with his departure in 2020. But if we're just looking at last year to now, replacing Chidobe Awuzie isn't the tallest order ever.

With Diggs hopefully taking a forward step in his second year, plus the influx of new talent to compete with Lewis and Brown, it's reasonable to assume that someone can fill Awuzie's shoes while the rest of the CB group gets stronger and deeper.

We should consider this better as Diggs gets another season To show what hes got. Adding Joesph and Wright offsets the Awuzie loss for me

If Diggs and Wilson make another jump next year this secondary could go from poor to average. Let’s not forget the secondary was ravaged by injuries last year. For a unit that relies on communication, the short camp and injuries doomed them from the start. Brown will likely start and Joseph will be broke in slowly depending on how quickly he progresses and how hard he works. 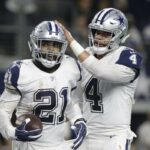 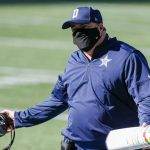