3 Bold Predictions for the 2021 Cowboys

The Dallas Cowboys have wrapped up OTAs and mandatory minicamp and are currently on a break until training camp begins in a little over a month in Oxnard, California. America's Team is looking to forget the disaster that was the 2020 season and get back to the playoffs for the first time since 2018.

To do so, they'll need their star players to stay healthy, which was a major hindrance last season. With the NFL extending to 17 games, a lot of milestones will be easier to obtain. Now, let's predict what three players, in particular, will be able to do on the field while the Cowboys pursue their 21st NFC East crown since the 1970 merger. 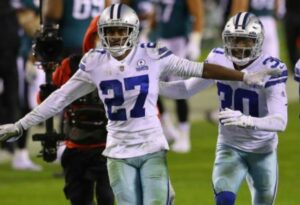 After the Cowboys got the steal of the 2020 NFL Draft when they took CeeDee Lamb 17th overall, they got another one the very next round. Trevon Diggs was selected at 51 and the expectations began immediately.

He had somewhat of a rollercoaster season which is what you expect from a rookie cornerback, and missing four games with a broken foot stalled his progression as well.

Despite the ups and downs, Diggs finished with 58 tackles and led the team in interceptions (3) and passes defended (14), making him the first rookie in team history to accomplished that. With one NFL season under his belt, the former receiver turned cornerback will see his impact increase as he looks to further establish himself as the team's CB1. 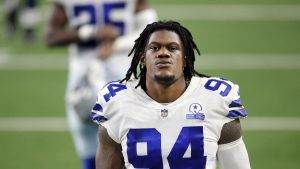 One of the brightest spots of the Cowboys 2020 campaign was the return of Randy Gregory who hadn't played since 2018. He would miss the first six games of the season due to a suspension. However, after knocking off the rust, Gregory started to show flashes of the raw talent he came into the NFL with out of Nebraska in 2015.

Gregory would finish with 3.5 sacks and three forced fumbles on limited snaps. Also, he did so playing in four fewer games and logging 186 fewer snaps than he did two seasons prior when he amassed a career-high six sacks.

DeMarcus Lawrence may not have had big sack numbers the last two seasons but he still demands double teams. This creates more one-on-one opportunities for Gregory, and with an increased snap count, the former Cornhusker has a shot to shine bright. 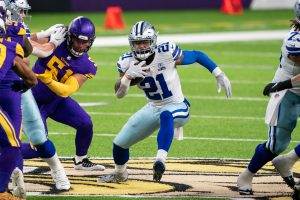 Ezekiel Elliott set his bar high fresh out the gate when he won the rushing title in 2016 and 2018. In between that, he led the NFL in yards per game (98.3) despite a six-game suspension. After receiving his six-year, $90 million deal before the 2019 season, Elliott finished in the top four in terms of rushing yards and rushing touchdowns, second in all-purpose yards, and tied for first 100-yard games.

2020 was Elliott's only down season in the league. He tied a career-high with six fumbles, had a career-low in terms of yards per rush, and failed to reach 1,000 yards for the first time in a full season. His top-three linemen (Tyron Smith, Zack Martin, La'el Collins) missed 36 games combined, and with no real threat from the quarterback position with Dak Prescott missing 11 games himself, defenses were able to key in on Elliott a lot easier.

Elliott has indulged in a rigorous offseason training regimen and has looked very agile and explosive while also looking leaner than he has in years past. With Prescott and his offensive line back healthy, and the motivation to silence the critics who have claimed he's no longer an elite runner, Elliott should prosper in 2021.

If the Cowboys are to make the postseason these are three of the most important players that will make that happen and they need monster seasons from each.

Matthew Lenixhttps://mlenixsctx.wordpress.com/
I write dope stuff about the Dallas Cowboys and what not.

Possible with a full training camp Gregory has a good year though 10 sacks could be ambitious. Personally always thought he was a little overrated. Small for a DE and gets blown off the line of scrimmage alot. But I’m rooting for him. Cowboys are thin at the pass rushing position. If Gregory or Lawrence go down their in trouble. Though it looks like they plan on rushing Parsons some.

I’m really really hoping Zeke has a bounce back year, because he was a serious liability for us last year. I’m not optimistic about him though. He looked slow last year even when he had room to run. RBs don’t get faster/quicker as they age.

I believe all three perdiction will be for the exception of Zeke. I believe it is more realistic for him to have 1200 rushing yards.

Agree, Diggs has the potential, with a year of experience under his belt, for 5 INTs, and Randy for ten+ sacks IF he gets the snaps. As for EE, agree with Gary b, RBs usually do not get quicker with age. And. unfortunately, quickness is where he appeared to decline most noticeably recently. Hope I’m wrong though. His first three years he looked like HOF potential.

I knew I would scroll down to read a bunch of negative comments!! So I’ll be the first to agree with these predictions!! Diggs had 3 interceptions and missed four games too, so if he can do that after missing four games, then he has a good chance at grabbing 5 interceptions!!

And Randy Gregory has always been really good at pass rushing, and as stated above, he had 6 sacks in one season after playing limited snaps, and then he came back this past season and ended with 3 and a half sacks and he didn’t come back until week 7 and even after he came back he didn’t get any meaningful snaps until week 9 or 10, and I don’t think he even got to start a game last season!! If he can do all that with very little playing time, he shouldn’t have any problems grabbing 10 sacks while starting the all season!!

Now Zeke is gonna be on a mission to prove all of you doubters wrong!! Everybody keeps holding 2020 against him and nobody seems to realize that he was trying to run behind 5th and 6th string linemen while also working with 2nd, 3rd and 4th string QBs!! After Dak got hurt, the other teams didn’t have to worry much about our QB play, so that let them focus in on Zeke!! Zeke was set up for failure from the beginning of the season when the linemen started getting hurt, but he was still doing good all the way up until Dak got hurt!! And for you people that say RBs get slower as they age, (Gary b) that mite be true, but it’s not with Zeke, he’s only 25 years old, he’s still really young, so I don’t see him slowing down yet!! And like I said, you can’t hold last year against him, he was hardly able to do anything last year with the no good linemen he had to run behind!! Now I don’t see him getting 1,500 yards rushing, but I think it’s possible for him to get around 1,300 to maybe 1,400!! And maybe 2,000 all purpose yards!! I can’t wait for this season to start…. I am way past ready for these players and others to prove all of you doubters and haters wrong!!

hilarious….you agree with all three predictions and then say Zeke won’t get the 1,500 yards…..