3 Key Players to Watch in Cowboys vs Rams

The Dallas Cowboys are spiraling downward and have been for quite a while now. They have lost three consecutive games and four of their last five. When you get towards the end of the season you want to be playing your best football and the Cowboys simply aren't doing that at the moment.

With their backs to the wall, they now welcome the Los Angeles Rams to town. This team, however, is trending in the opposite direction. The Rams have won five of their last seven games and are currently one game behind the Minnesota Vikings for the final playoff spot in the NFC.

This will be a tough test for the Cowboys who are in desperate need of a win to keep their lead in the NFC East. Here are three key players who could help make that happen. Dak Prescott is having a career year in 2019. He leads the NFL in passing yards and is tied for fourth in touchdown passes. However, the last three games have been a struggle for him. He's only completed 59.5% of his passes with just three touchdowns. This is a significant dropoff considering he was completing 67.6% of his passes in the first 10 games.

It won't be easy in this game with a Rams defense that has turned it around since acquiring All-Pro Cornerback Jalen Ramsey. They are 10th in the league vs the pass and have the seventh-ranked overall defense. Prescott will need to be much better going through his progressions and being accurate in this crucial game for the Cowboys and get back to the form that made him an early MVP candidate. 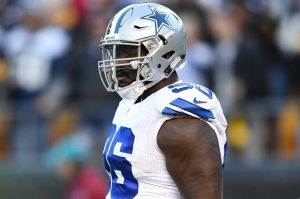 Maliek Collins has had an interesting season so far. On the surface, it looks like a huge year considering his four sacks are only one shy of his career-high which he set during his rookie season in 2016. However, he only has 19 total tackles in the 11 games he's appeared in. In seven of those games, he only registered one tackle which is unacceptable by a player with his talent.

The Rams possess the 21st ranked rushing attack in the NFL. Normally, this would be seen as an advantage for the Cowboys but with their defense only being 19th in stopping the run it's pretty much an even matchup. It will be paramount for Collins to be stout in the middle and not allow Running Back Todd Gurley to carve up this defense as he and the entire Rams rushing attack did vs the Cowboys in last year's playoffs when they ran for 273 yards collectively. 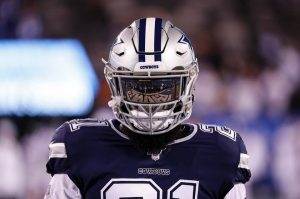 Ezekiel Elliott, albeit quietly, is having another good season. He is sixth in the NFL (fifth amongst running backs) with 1,071 yards and his nine rushing touchdowns are the second-most of his career. Also, his five 100 yard games are tied for the second-most in the league this season. The last five games haven't gone according to plan for Elliott or this rushing attack. He hasn't reached 100 yards in any of them and that's been a huge factor in the Cowboys losing four of those games.

The last three games have seen Elliott get off to fast starts. He had 61 and 56 yards in the first half vs the New England Patriots and Buffalo Bills. Last Thursday night, he ran the ball eight times on a 17 play drive to start the game vs the Chicago Bears. Unfortunately, he only had 14 combined carries in the second half of all three games.

When Elliott is rolling, especially early in the game, you can't take the ball out of his hands. The more effective he is the more productive Prescott can be in the play-action passing game, which he excels at. The Rams are 12th vs the run, the Cowboys are 10th in rushing yards. Although it won't be easy it will be very important to get Elliott going in order to control the clock and keep a struggling Cowboys defense off the field as much as possible.

The Cowboys have no room for error in the last three weeks. With the Philadelphia Eagles now tied in the standings, and a head to head matchup looming next week, it's time for the Cowboys to rise to the occasion and secure this division title for a second consecutive season. Dak Prescott, Maliek Collins, and Ezekiel Elliott all having big games vs the Rams will go a long way in making this a reality.

Matthew Lenixhttps://mlenixsctx.wordpress.com/
I write dope stuff about the Dallas Cowboys and what not.