The Dallas Cowboys outplayed and outlasted the Minnesota Vikings in Week 11 to secure their first road victory of the 2020 season. The 31-28 win is the first since Week 5 against the New York Giants, thus ending their four-game losing streak. After arguably their most impressive performance to date, who knows what's in store for this team moving forward?

Taking down the Minnesota Vikings shouldn't be taken lightly nor should the near takedown of the undefeated Pittsburgh Steelers back in Week 9. The Dallas Cowboys are a better team than the way they played this season and it's finally starting to show up on game days. With that in mind, I thought I'd share with you a handful of takeaways from Sunday's matchup with the Vikings.

Let's take a look… Shall we?

The “Red Rifle” rebounded from not only a concussion and but also COVID-19 to provide a much-needed spark for the Dallas Cowboys offense in Week 11 against the Minnesota Vikings. Dalton showed a little rust and was far from perfect, but he still managed to continuously lead the Cowboys offense up and down the field Sunday afternoon against the Vikings. With No. 14 at the helm once again this was arguably the most balanced performance Dallas has had offensively this season. Fingers crossed this is just a small glimpse of bigger and better things to come.

After losing Tyron Smith and La'el Collins for the year the Dallas Cowboys have been forced to shuffle and reshuffle their offensive line from week to week. Fortunately though, they may have finally stumbled onto their best starting five. With Zack Martin at RT, Connor McGovern at RG, Joe Looney at C, Connor Williams at LG, and Cameron Erving at LT the Cowboys OL looked the best they have all year in Week 11 then at any other point this season. As a result Andy Dalton went nearly untouched and Zeke finally had his first 100-yard game of the year.

Two turnovers, nine tackles, and several bone jarring hits may have not only earned Donovan Wilson the starting job opposite Xavier Woods for the remainder of the 2020 season, but the starting gig beyond this year as well. No. 37 was all over the field Sunday afternoon against the Vikings and was a big reason why the Dallas Cowboys secured their third win of the year. The 25-year-old has helped solidify the backend of the Cowboys defense and should only continue to get better the more confident he becomes. He may very well be the future of the position.

Reoccurring injuries continue to be a problem for LVE, but when healthy he is no doubt one of the best linebackers in the entire league. After returning to the lineup nearly a month ago from a broken collarbone No. 55 is finally starting to look like the player he was back in 2018 as a rookie when he made his first Pro Bowl. Week to week his play continues to improve, evidenced by his team-leading 12 tackles Sunday afternoon against the Vikings. If he can stay healthy the remainder of the season we could see the entire Cowboys defense take their game to another level.

Battle for the NFC East is Heating up

Surprisingly enough, the NFC East division is still up for grabs. All four teams have three wins through Week 11. The Philadelphia Eagles are in first at 3-6-1, while the Dallas Cowboys, New York Giants, and Washington are each at 3-7. Either the Cowboys or Washington can take the lead Thursday depending on their head-to-head matchup, but that could be short-lived if the Eagles can beat the Seattle Seahawks Monday night. Regardless of the outcome next week the battle for the NFC East division is just heating up with Dallas having the easiest remaining strength of schedule. 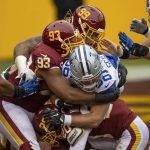 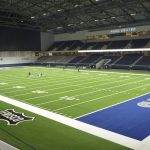