The wide receiver position has often come with the label of being a “Diva”. Outspoken personalities like Terrell Owens, Antonio Brown, and Odell Beckham Jr will always be looked at as selfish because of their brash demeanors. The only way receivers can get the kind of numbers they want is to touch the ball as much as possible. Unfortunately, that depends on how well the quarterback is protected by the offensive line and how accurate he is throwing the ball. With that dependency, it's no wonder they get frustrated from time to time, but the Dallas Cowboys don't have that problem with Amari Cooper.

When Saints Wide Receiver Michael Thomas signed a five-year 100 million dollar deal with 61 million in guarantees Cooper and his team couldn't have been happier. This reset the market and simultaneously drove up the asking price for Cooper when it becomes his time to cash in.

Cooper was a guest on ESPN's First Take around the time Thomas inked his new deal and he was asked about his own value. He made it clear that he still had work to do in order to be worthy of top money at the receiver position.

“Well, not right now, I'm definitely looking forward to earning that respect, and definitely looking forward to coming into this year and just putting up those numbers for my team, and really showing what I can do in a full season as a Dallas Cowboy. I know that I have the skill set to be one of the highest-paid receivers, but I'm just all about going out there and proving it,” Cooper said.

The willingness to be patient has paid off once again for Cooper as Atlanta Falcons star wideout Julio Jones inked a three-year 66 million dollar deal last week. The contract is fully guaranteed with 64 million guaranteed at the time of signing. Once again the ability to wait and play the market has Cooper sitting pretty when his time comes.

His situation is a little different from his All-Pro teammate Ezekiel Elliott who signed a six-year 90 million dollar mega-deal last week with 50 million is guarantees. Running backs have a shorter shelf life than any other position so it's no surprise they have more urgency locking down their financial futures. Plus Elliott was only set to make 3.9 million this season as opposed to 13.9 for Amari, that's a huge difference. Plus, if Amari were to be franchise tagged in 2020 it would cost the Cowboys around 18 million. That's 32 million potential dollars for Cooper over the next two years even if a deal isn't reached which makes it easier to be patient.

With all dollars being thrown around to other receivers and his teammates, it would be easy for Cooper to make a fuss about his own situation. Instead, the Cowboys have a top ten player at his position that still feels he has something to prove. He leads with his play rather than his words. Take last week's season opener for example, with all the drooling over Dak Prescott's performance, justifiable I might add, Cooper had another productive day at the office with 6 receptions for 106 yards and a touchdown. Cool, calm and collected is the best way to describe Amari Cooper, he knows his day is coming to cash in big. 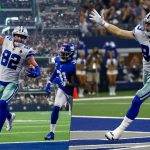 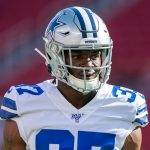