In the game of football, as we all know, it starts and finishes in the trenches. In the case of the Dallas Cowboys on the defensive side of the ball in 2019, they have struggled to control the line of scrimmage vs the run. They came into last Sunday's game vs the Los Angeles Rams 19th against the run for the season.

Last year in the playoffs, the Rams ran for 170 yards in the first half and 273 yards for the game en route to a 30-22 victory over the Cowboys. The two teams met again this past Sunday with playoff implications for both. Running Back Todd Gurley is always a dangerous weapon on any given Sunday so it was paramount to keep him check if the Cowboys had any shot of ending their second three-game losing streak of the season. Defensive Tackle Antwaun Woods stepped up to the plate and answered that challenge.

From the outset of the game, Woods set the tone in the trenches and never allowed the Rams to establish the run. In the video below, Woods puts on a tour de force on how to dominate the interior. His quick first step, pursuit angles, and power were all on display. He was such a disruptive force in the first half it made the Rams one dimensional as they went into the locker room down 28-7.

Antwaun Woods was eating with 2 spoons versus LAR. #Cowboys pic.twitter.com/z1guESS6Ux

Just how good was Woods in this game? His five tackles tied his highest total of 2019, his three solo tackles were his best in any game this season and he got his first tackle for loss on the year. All this translated to the Cowboys holding Gurley to just 20 yards on 11 carries and the entire Rams rushing attack to 22 yards on 14 carries which is the lowest rushing total for any team vs the Cowboys all season.

Woods is the primary run-stopper along the defensive front for the Cowboys. The more he can dominate at the line of scrimmage vs the run the more one-dimensional opposing offenses will be. This will allow Jaylon Smith and Sean Lee the freedom to roam and make plays. Also, with offenses only being able to pass it makes life easier for the secondary seeing as they know what to expect. Again, it all starts in the trenches.

Woods will be needed again this Sunday vs the Philadelphia Eagles as the Cowboys look to wrap up the NFC East title for the second consecutive season. Will Woods dominate the interior and help get the Cowboys back to the playoffs? We shall see.

When u get in trouble 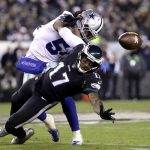 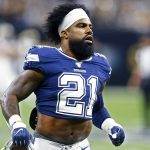