There’s been a lot of false information and reaching that’s been put out there about Dak Prescott and the Cowboys front office regarding the negotiations around his contract extension. It’s important to know what’s fact and what’s fiction.

The Cowboys want this deal to get done sooner than later. They want to lock up their franchise quarterback and put all these contract negotiations to bed. So why hasn’t Prescott agreed to a deal yet?

All of these points are from reports from trusted Dallas Cowboys sources such as writers and analysts. The goal today is to get rid of the ridiculous misconceptions surrounding both the Cowboys and Dak Prescotts camp.

If you really want to know the numbers and figures that each side is looking at, here’s a condensed glimpse of where we are.

What the Front Office Wants 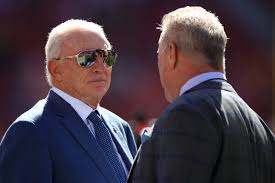 The reports are pretty consistent; they want Prescott’s deal to have more years on it. They’re willing to make him the highest paid quarterback in the game but they want to do it for a longer term. That means Dallas won’t have to reset the quarterback market so soon after they already would’ve.

They’re in the realm of $33-$35 million per year on a five-to-six-year contract. Even though the salary cap goes up each season, the Cowboys wants to protect themselves from any sort of financial strain during his career as well as pay their quarterback what they believe he’s worth. 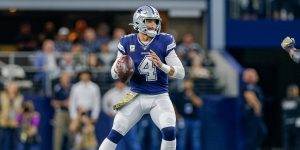 The reports that Prescott was looking to get $40 million a year aren’t true. Yes, no one in their right mind would turn down an offer like that if it existed but that information was leaked to either get attention or to turn the fans against the Cowboys quarterback and make him look selfish.

According to sources, the actual asking price is a four-year deal at around $35-$37 million per year with guaranteed money just above Carson Wentz’s $107 million.

A four-year contract would mean that Prescott could outperform his deal by year three and once again reset the quarterback market in less than half a decade. That would be similar to Russell Wilson and what he’s done in Seattle with multiple four-year contracts. 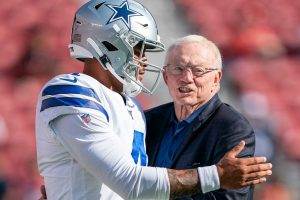 For perspective, if this deal had been done in March of 2019 before Jared Goff, Carson Wentz, Russell Wilson and Kirk Cousins’ extensions, the Cowboys probably could’ve saved themselves around $4-$6 million per year!

Prescott chose to play the final year of his rookie deal and bet on himself for a bigger payday and improve his play as a quarterback. If you look at his numbers, the stats were among the best of his career as well as in the entire league. He obviously wants to get paid above his draft mates Jared Goff and Carson Wentz but initial offers have been low-ball by comparison.

Now that the Cowboys chose to use their franchise tag on him, they’ve got until July 15th to give him an extension and for it to go on this years cap. The Cowboys would rather give Prescott an extension than to have a quarterback franchise tag number for 2020 ($31.4 million) which would count more against the cap.

Prescott knows this and has seen more quarterbacks get paid and reset the market. He knows the group of players who’ll be next in line for extensions:

Dak’s in no rush to sign his franchise tender but the Cowboys are going to cost themselves more money. It could be from major cap hit the tag will cause or from another quarterback resetting the market, which would drive Prescott’s asking price even higher.

Will the Deal Get Done? 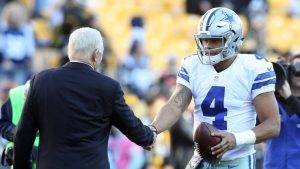 Jerry Jones is very good at keeping players he wants to keep. We saw last summer a barrage of players get their long-term contract extensions: Jaylon Smith, La’el Collins and Ezekiel Elliott. All three were players they wanted to keep. If the Cowboys didn’t want to keep Prescott or even to continue these negotiations, they wouldn’t have bothered to place the tag on him.

Make no mistake and take a breather; all signs point to this deal getting done. Maybe not today, maybe not tomorrow, but it will happen soon enough. The closer the Cowboys get to the July 15th deadline, the more at risk the organization is of seeing the market go up even more.

Dak Prescott grew up a Cowboys fan and has always wanted to wear The Star. He’s been the team’s leader for four years with zero losing seasons, plus the second-most wins in his time in the league (behind only Russell Wilson). Prescott wants to get this deal done too but is in no rush to sign and knows that, one way or another, he’s going to get paid.

We know the facts. We know it’s going to happen. All that’s left is to sit and wait.