The NFL preseason is only a few weeks away and not too long after that, the 2018 season officially begins. For the Cowboys, it’s a year of progressions, extensions and questions.

Progressions for the year-two and three players like Dak Prescott, Ezekiel Elliott, Jaylon Smith, Maliek Collins, Taco Charlton, Chidobe Awuzie, Xavier Woods, Jourdan Lewis and others. These are all cornerstone players who need to have a big impact this season. These players all had an impact on the 22-10 overall record the last two seasons and will have to be even better to take that next step.

Extensions for players of the present and future. Guard Zack Martin already received his extension and is now the highest paid player in the league at his position. For players like DeMarcus Lawrence, Byron Jones, Dak Prescott, Jaylon Smith, David Irving and others who hope to be in Dallas next season and in the foreseeable future, 2018 is the season to ball out.

Finally, questions. There are always more questions than answers at first, and the Cowboys have many at different spots.

One way or another, these will all be answered eventually.

As for the teams the Cowboys will play, Dallas has the 15th toughest schedule in 2018, according to CBSSports.com. A mixed bag of elite teams, teams on the rise and fall, and teams with more questions than Dallas currently has.

Most experts have the Cowboys winning anywhere from 8 to 11 games this year, and with the teams they’ll face and the squad they have, it’s all very possible. Talent won’t be a problem.

It’s not too hard to see this team being more like the 13-3 team from 2016, rather than the 9-7 team last season. If the team can stay healthy, adapt well to any injuries, and answer their questions as soon as possible, 2018 can be special. From 1 to 53, the Cowboys have as much talent as any team in the league, but they’ll need to prove it against 13 teams in 16 games.

First thing you’ll notice is, “wait… it’s NOT the Giants?”

It’s become something of a tradition to open the season on NBC’s Sunday Night Football in Dallas against the Giants. But like Prince Akeem of Zamunda said, “it is also tradition that times must, and always do, change, my friend.”

Carolina is coming off of a playoff year, and starting against Dallas is Cam Newton, the x-factor.

Cam Newton’s career pattern has been, he’ll be good one year and fall off the next season. If that pattern continues, it means that Carolina could be in trouble.

The last two home games against the Giants, the Cowboys have scored 19 points. Despite a much more evenly matched offensive game than we’ve seen in the past, this may actually be a defensive game.

This game will be billed as “Zeke vs. Saquon,” and for good reason.

We’re seeing the future of NFL running backs in this game, but it’s still September and Dallas is 9-4 in their last 13 games in September. They’ll continue that dominance. 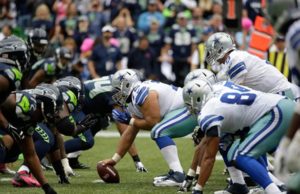 Dallas and Seattle always seem to play each other down to the final possession.

The Cowboys tried to obtain Earl Thomas in a trade with Seattle ever since Thomas made it clear he’d like to be in Dallas.

Despite the Legion of Boom starting to deteriorate with Richard Sherman now in San Francisco, and the uncertainty around Thomas’ future in Seattle, the Seahawks still posses one of the league’s best defenses and an elite quarterback in Russell Wilson.

Plus, the game is in Seattle. Good luck with that.

The battle of the silver and blue. Dallas has fared well against Detroit since Calvin Johnson retired, winning the last two matchups.

Detroit arguably features the best secondary in the league and also have a new, solid offensive line. However, with Detroit’s front seven not looking like a match for Dallas’ offensive line and fierce rushing attack, it doesn’t look like passing the ball will be how Dallas wins.

Watson vs Prescott. I can already see the promotional materials for this game, with both #4 young star quarterbacks, billed as the “Battle 4 Texas.”

Ironically, people may want this to be a rivalry, but all these teams share is a state. There’s no rivalry-level passion in this game, but plenty of talent.

The contingent for Houston this season is the health of their quarterback and the improvement of their offensive line. I like the Cowboys’ chances, but I think Houston takes this one close. 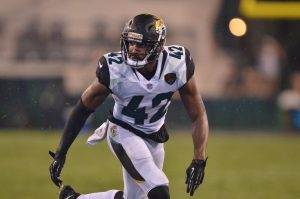 Undoubtedly, Jacksonville was the surprise team in 2017. They posted one of the league’s best defenses, and an exciting new running back in Leonard Fournette.

They have only one X-factor on their team who can cause a deterrent for their season: quarterback Blake Bortles.

An up and down career can not only cause concern but call into question their value. Despite his contract extension in the offseason, I think his inconsistency and loss of his Allen receivers (one of which is now a Cowboy) will hurt Jacksonville and possibly a backslide from 2017. 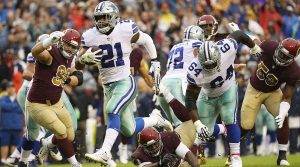 The Washington Redskins have arguably the worst roster in the NFC East. It doesn’t matter who’s quarterback, even though Alex Smith looks to be a better option in their system.

The Redskins didn’t do enough to help the team prepare for success.

The Redskins are in win-now mode with Alex Smith at quarterback, but don’t have the team in place to compete within their own division.

Despite there not being a game for week 8, it’s always important to acknowledge the bye week – a time to get players rested and healthy.

With Dallas having yearly injury concerns to some of their key players, like Sean Lee and Tyron Smith, the bye helps immensely.

Teams who have an earlier bye, they’ll get healthy too soon and flatten later on. Teams with a late-season bye just keep taking punches for weeks at a time, gasping for air.

Luckily, Dallas has one right in the very center.

The Titans barely squeaked into the playoffs last season, and pulled off a terrific comeback in the wild card round. Marcus Mariota looks like a franchise-level quarterback, and Derrick Henry is a beast of a running back. The titans have nowhere to go but up, but Dallas is winning this game.

As I previously stated about Jacksonville, there are teams that take a step back after having success and making it to the playoffs. I think the Titans are another one of those teams.

The Titans’ offensive line and running game is impressive, but their passing game is almost nonexistent. The cowboys are very good against the run and are as deep along the defensive line as they have been in years.

If the Titans can’t throw the ball on Dallas, I don’t see a way that Tennessee leaves this game with a victory. 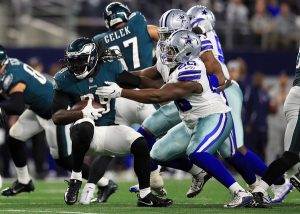 Carson Wentz versus Dak Prescott is going to be one of the key quarterback matchups for the next decade, and it looks like the Eagles and Cowboys are going to be perennial NFC contenders for the foreseeable future.

In their first contest, Wentz will get the better of an improved Cowboys defense, and be an MVP candidate. This will be one of the games the MVP voters will look at. Close game, Cowboys pull it off.

It’s amazing that three players can have as big an effect as they did, but not having Sean Lee, Tyron Smith and Ezekiel Elliott had a disastrous effect last season against Atlanta. One of the worst games the Cowboys played in 2017 and none of it looked good.

This season, I expect a better game out of the Cowboys.

Barring injury, the Cowboys look like a more evenly matched team with the Falcons.

Atlanta’s new receiver toy, Calvin Ridley, looks like an unfair, very talented companion of Julio Jones and, despite an improved Dallas secondary, Matt Ryan will still be Matt Ryan. For now, Falcons win in a much closer game than last season. 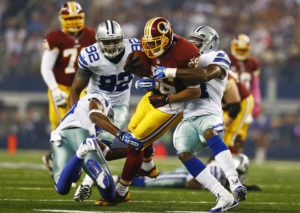 The result will only differ in score. Washington is betting the farm on Alex Smith but doesn’t have the team to back him up. Aside from the team’s offensive line, Washington doesn’t offer much to worry about.

Their defense is full of talent, but too much potential. If the Cowboys can block Ryan Kerrigan, and get past Josh Norman, the offense will be fine.

Aside from Jordan Reed, whose health is suspect, the team doesn’t have any weapons worth worrying about. Dallas sweeps the series.

The fans all share a space and there’s always trash talk.

It’s all in love, until they play each other.

Native Texan Drew Brees has made a career of making defenses look bad, no matter who. After a heart-breaking end to the season against Minnesota, the already stacked Saints look even better.

Both the Cowboys and the Saints will be contenders, and feature some of the most complete teams in the league, but New Orleans will show why they’re elite.

As I said before, this series will split and each team wins on the road. After going 2-2 in the previous four games, the race for the NFC East will come down to this game.

Wentz and Prescott again have a battle, but what will affect the outcome the most will be the defense of Philadelphia.

While in their first meeting Dallas will have the upper hand offensively, the Eagles will have since adapted and dominate that side of the ball while Carson Wentz pushes for MVP.

With Andrew Luck back, the Colts are a better team, especially with their revamped and much improved offensive line. However, no team on the Cowboys’ schedule has more questions and more holes than the Colts.

Despite having Andrew Luck back, they have holes on offense at receiver and running back and all across the defense.

Indianapolis will be a better team this year, just not against the Cowboys. 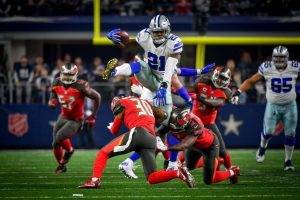 With the concerns around Jameis Winston, the confidence should be all on the Cowboys.

This will be a late season push for the playoffs and Tampa Bay may be all but eliminated from contention at this point in the season.

Aside from receivers and tight ends, there’s really no position group that Tampa Bay holds a bigger edge on.

The Buccaneers may have improved in a lot of areas but probably not enough to take that next step. Cowboys clinch a playoff spot with the win.

The Giants at this point will be much better off than they were a season ago. They may be in contention for a final playoff spot, and Dallas could be playing for the divisional crown.

Giants and Cowboys games are usually well played and fought to the last snap and I don’t think this game will be any different.

Whoever is the healthiest at this point in the season will win, and in that case, the Cowboys have the advantage. Even if they aren’t as healthy as New York, they have better depth to acclimate to any injuries the season may throw at them.