A contract extension for Dak Prescott felt imminent just a few weeks ago. The Dallas Cowboys Quarterback has led America’s Team to a 32-16 record, two NFC East titles, and a playoff win through his first three seasons. With one year left on his fourth-round rookie deal, Prescott should be ready to get paid. However, although negotiations are ongoing, it seems like it’s time to consider the possibility of Prescott playing out his rookie contract instead of signing a huge extension right now.

The reason why is not only the fact that we’re only days away from the start of the 2019 regular season as the Cowboys and Prescott have yet to reach a deal, but an interesting answer from Jerry Jones when asked if Dak would have an issue with playing this season if they can’t strike a new deal. “Not one bit” was Jones’ answer.

Jerry Jones said he “couldn’t be more pleased” with Dak Prescott’s training camp and preseason. Does Jones think Dak would have any problems playing under the final year of his rookie deal if they can’t get a new deal done before the season starts? “Not one bit. Not one bit.

This is made all the more interesting by Ezekiel Elliott’s holdout, which sped up negotiations with the running back at a time when the Cowboys’ front office was seemingly concentrated on Dak and wide receiver Amari Cooper, whose contracts expire after the 2019 season.

Dak Prescott’s improvement has been widely talked about this offseason and we’ve been able to witness it in the preseason. All the while, we’ve been discussing how much he is worth. Right now, his value likely stands somewhere between $32 million per year (what recent Carson Wentz’ extension averaged) and $35 million, which is where highest-paid Quarterback Russell Wilson ranks.

Reports of Dak asking for $40 million per year emerged a few weeks ago and many fans and analysts went crazy. Whether this figure is accurate or not, it’s more than clear that Prescott is not getting that kind of money. He surely knows it. That’s just how negotiations work. 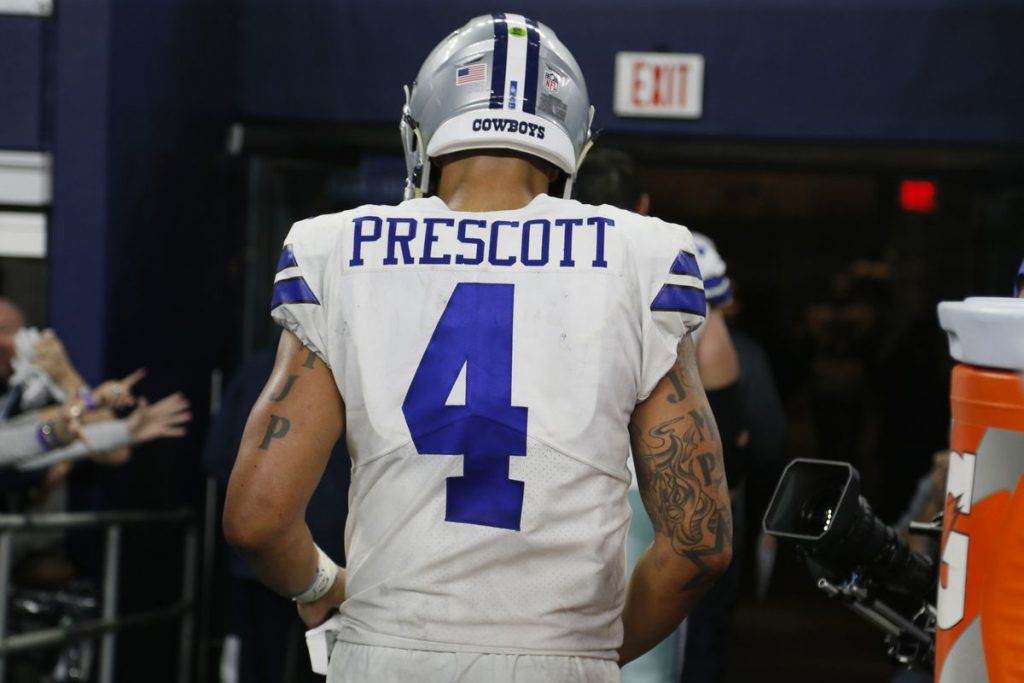 But if Jerry Jones thinks Dak wouldn’t mind playing out his rookie deal “one bit,” however much he signs for in 2020 would definitely be closer to 40 million per year than if he signs right now, unless he takes not one, but three step backwards in the upcoming season, which is very doubtful.

Now, players usually want to secure the bag to have long-term security, but are Jerry’s comments proof that Dak could really play out his rookie deal?

After all, he hasn’t missed a single day of practice and hasn’t shied away from preseason action. Is he confident enough in how he will perform in 2019 to be able to risk playing one more season as one of the most underpaid players in the NFL in order to increase his value next offseason?

Of course the team would be benefited from watching one more season from its promising franchise quarterback, but those benefits might not look as good if they have to break the bank next year. Considering there are many quarterbacks who could drive the price even more (such as Deshaun Watson, Mitchell Trubisky and even Patrick Mahomes) by then, the decision to let Dak finish his contract could seem unwise in a handful of months.

That’s of course, if he decides to play it out.

If the Cowboys don’t sign Prescott to a contract extension before the season begins, I would be very surprised. But the season opener is right around the corner, and there is reason to doubt he could choose to play out his current deal. Now granted, the fact that we’re mainly discussing Ezekiel Elliott’s holdout doesn’t mean the Cowboys and Prescott aren’t close to a deal. After all, despite little advertising, Jaylon Smith’s contract extension news broke amid all the Zeke drama.

After spending the entire offseason discussing the Dallas Cowboys’ upcoming extensions, it’s fair to the drama that the season is less than two weeks away and we still don’t know what lies ahead.

Tell me what you think about “Could Dak Prescott End Up Playing Out Rookie Deal?” in the comments below, or tweet me @MauNFL and let’s talk football! If you like football and are looking for a Dallas Cowboys show in Spanish, don’t miss my weekly Facebook Live! show, Primero Cowboys!