The Cowboys have been investing considerable assets to build up the middle of the defensive line over the last few years. As our 2022 position preview series continues, we’ll look at the defensive tackles and see how optimistic we should be about their growth and development.

Starting in 2019 when Trysten Hill was drafted in the 2nd Round, Dallas has used a Day 2 pick in each of the last three drafts at defensive tackle. We’ve also seen later-round picks at DT and some veteran free agents brought in.

A few months before Hill was drafted we watched the Cowboys get run over in their playoff loss to the Rams. Los Angeles rushed for a whopping 273 yards as they handed Dallas another 2nd-round exit from the postseason.

Things got even worse in 2020 when the Cowboys had one of the worst defensive seasons in franchise history. They allowed over 2,500 rushing yards as the second-worst run defense in the NFL. While they did improve that ranking to 16th in 2021, there’s obviously still plenty of room for improvement.

Stopping the run isn’t just on the defensive tackles, of course, but analysis shows they’ve been the biggest issue. The linebackers can only do so much when opposing runners are getting easy initial bursts past the line of scrimmage. And DE DeMarcus Lawrence has graded out as one of the top run defenders in football the last few years; he can’t do it all on his own.

Can the Cowboys build on last year’s improvement and become an above-average run defense? Could one of their tackles also step up and contribute more than just two sacks; the most they’ve had from a DT over the last two years?

Hopefully, with these young assets now entering their second, third, and fourth seasons, Dallas will see some profit from their investments.

There won’t be many changes, if any, at the top of the depth chart in 2022. Neville Gallimore, Osa Odighizuwa, and Carlos Watkins are expected to resume their rotation as the team’s top tackles, hopefully with Gallimore and Odighizuwa coming into their own as third and second-year players.

Dallas added Neville and Osa with 3rd-round picks in the 2020 and 2021 drafts. Gallimore was limited to just five games last year after an elbow injury in the preseason. When he finally returned in December, Neville quickly reasserted himself as an exciting prospect and the team’s most disruptive DT.

Before Gallimore came back it was the rookie Odighizuwa who was raising eyebrows with his play. He made an immediate impact as a starter and occasional playmaker, rare for a mid-round rookie at his position, and along with Gallimore has created realistic excitement for the position going forward.

Despite having these two young guys to build around, Dallas still re-signed Watkins this year to another modest one-year deal. The contract comes with minimal guaranteed money, though, so Carlos could find himself fighting off younger talent for a roster spot. Still, it’s the veteran’s job to lose after being a reliable contributor last year.

Trysten Hill hasn’t enjoyed the same early success as his young contemporaries. His rookie year was marred by reports of laziness and a bad relationship with former Defensive Coordinator Rod Marinelli. He was looking good to start 2020 but went down with an ACL tear in Week 5, then missed 11 games last year as well.

Despite his 2nd-round draft pedigree, Hill is now up against an expiring contract and $1.2 million in cap savings if he’s released this summer. Unless he has a shockingly productive camp, it’s possible that Trysten’s time in Dallas is over as younger prospects move up the ladder.

Two of those prospects are Quinton Bohanna and John Ridgeway, recent late-round picks with the size to play the traditional “nose” or run-stuffing role on the line. We’ll talk more about them shortly.

Also in camp this year will be some dark horses in Austin Faoliu and Josiah Bronson. Faoliu spent last year on Dallas’ practice squad and got called up for one game. Bronson was with the Saints and Browns last year, appearing in seven games, before being signed by the Cowboys in January. 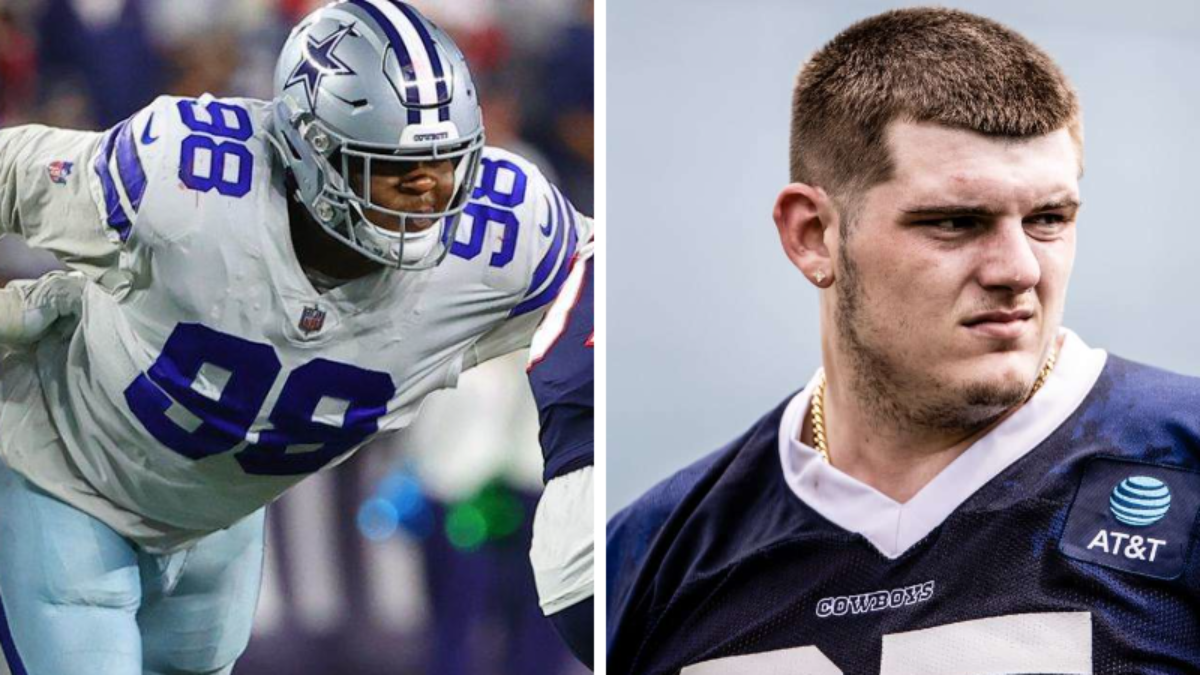 Anytime you see the classic Highlander, “There can only be one,” scenario on the roster then you’ve got a good competition coming. With likely just one roster spot for a big-bodied nose tackle on this year’s team, it feels like Bohanna and Ridgeway are heading into a dogfight for that job.

Bohanna was a 6th-round pick last year listed at 6’4″ and 360 lbs. While he did appear in 14 games, Quinton struggled to make a meaningful impact and was at times cited for falling out of the play despite his size.

Ridgeway joined Dallas last April as one of their many 5th-round picks. He was seen as a potential steal that late with raw physical tools and more general athleticism than Bohanna.

With Quinton having played on nearly 20% of the Cowboys’ total defensive snaps last year this isn’t a meaningless battle. It’s especially crucial to those goal-line and short-yardage situations when you’re counting on your nose tackle to force the issue and set up his teammates for success.

Ridgeway offers more potential versatility; big enough to play the nose but also has the length to move out into other techniques. But Bohanna has a full year of experience, real-game snaps, and professional development going for him in this duel.

It is possible that Dallas keeps both prospects if they go long at DT, or if Ridgeway is so good out of the gates that he makes Carlos Watkins expendable. But this feels like two guys fighting for one niche spot on the roster, making it the most intriguing battle to watch at defensive tackle in this year’s camp.