The Dallas Cowboys and Tampa Bay Buccaneers will open the 2021 season in 56 days, and according to Mike Tannenbaum this could be a preview of the NFC Championship Game. The former GM for the Jets and VP of Football Operations for the Dolphins said as much in this segment for ESPN's Get Up.

.@RealTannenbaum is alllllll the way in on the Cowboys this season 👀

"They are the biggest threat in the NFC to the Tampa Bay Buccaneers! … I expect this team to compete against Tampa Bay in the NFC championship game. pic.twitter.com/cvcI9G2RCi

With one of ESPN's known Cowboys foil personalities on screen with him in Dan Orlovsky, it's easy to pass this clip by as nothing more than another hit piece aiming to spark debate on both sides. Luckily, we won't have to wait long to get a feel for how the Cowboys stack up against the defending Super Bowl champions returning every one of their starters.

Tannenbaum gives an in-depth answer, starting with the most agreeable point surrounding the 2021 Cowboys – that a team returning Dak Prescott at QB should automatically be division favorites amongst Ryan Fitzpatrick in Washington, Jalen Hurts in Philadelphia, and Daniel Jones in New York.

Taking control of a division the Cowboys had a shot at into week 17 a year ago earns them only an outside shot at dethroning Brady and the Bucs, though Tannenbaum is persistent in saying this team's potential goes beyond the Divisional Round.

A top five offense is well within reach for the Cowboys when healthy, but through four full weeks with Prescott on the field in 2020 they allowed a franchise record 146 points. Dan Quinn making a “massive impact” as Tannenbaum predicts is something we'll simply have to see to believe. At the moment, the Cowboys best defense on paper appears to be outscoring teams, getting out to early leads and forcing opposing offenses to become one dimensional. 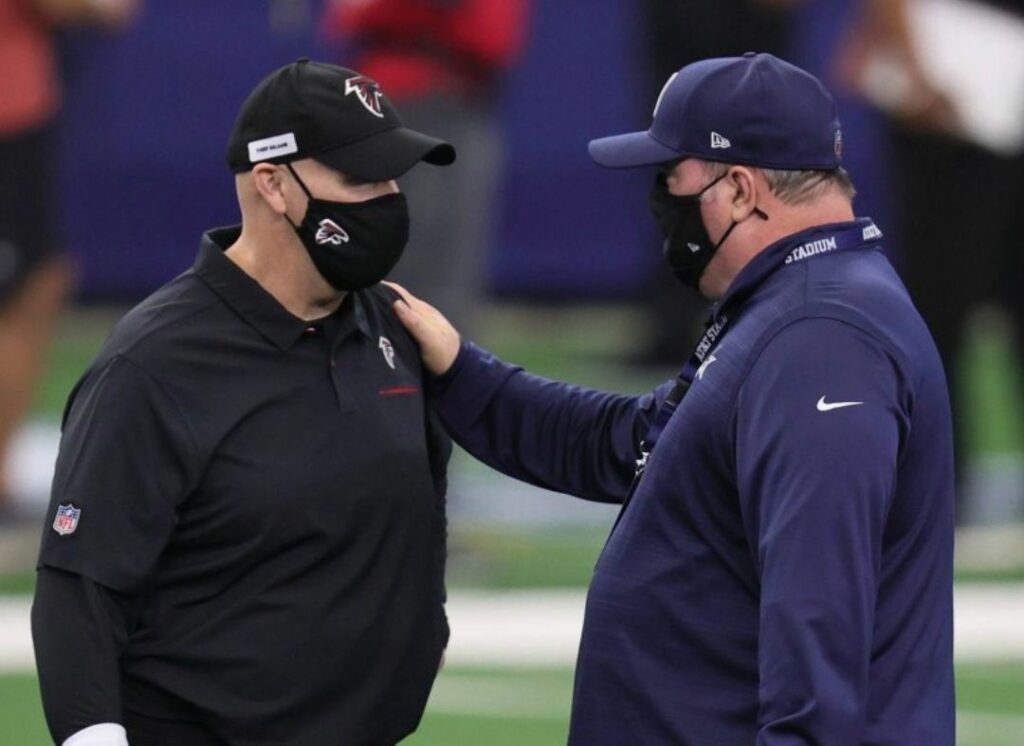 With a historically bad run defense in 2020, it will take a lot to discourage opponents from at least trying to run the ball at Dallas. Leonard Fournette and Ronald Jones will be the first test for Dan Quinn's run defense in week one. The Cowboys consolation prize if they contain this duo? A vastly unproven secondary lining up against Mike Evans, Antonio Brown, Chris Godwin, and Scotty Miller.

Of course, how these teams fare in the season opener on Sunday Night Football and how they're playing late in the season could be starkly different. Tom Brady's teams have always found an extra gear as the playoffs near, while the Cowboys are hoping the same can be said under Prescott as he comes into a season with a WR corps that can match Brady's.

Who has the best WR trio in the NFC?

❤️ for Cowboys
🔁 for Bucs pic.twitter.com/oxjPKHDXr0

Tannenbaum makes no mention of Amari Cooper, Michael Gallup, or CeeDee Lamb in his prediction, but does point out the three offensive linemen the Cowboys return. LT Tyron Smith, RT La'el Collins, and LG Connor Williams will all be on the field in Oxnard. Not enough was made of the fact that Offensive Coordinator Kellen Moore maintained any resemblance of an offense for the Cowboys without either starting tackle or his QB1 in 2020, making the return of these three starters as good as any free agent signing or draft pick across the NFC.

In a way, both the Cowboys and Buccaneers are “running it back” in 2021. Tampa Bay holds all the credibility at the moment that this is the right move, tossing the Lombardi Trophy around the ocean a year ago. The Cowboys believe in their star power returning from injury as well as more major changes on defense, gaining national supporters in the media along the way.

The return of Leighton Vander Esch for the 2022 NFL Wild Card round of the playoffs helped the Cowboys' defense hold Tom Brady and...

Cowboy hype.
Media get cliks by saying the Boys are best or worst.
The Boys need 15 starters either new players or returned injured players . That is 15 different starters than who finished last season.
Does that sound like a playoff team?

The Cowboys can be as good as a y team in the NFC if they can avoid key injuries. The sooner Jabril Cox and Micah Parsons start taking snaps away from Jaylon Smith the better they’ll be on defense. As bad as Awuze and Woods were in the secondary, Jaylon Smith was and is worse. If Vander Each can start playing decent football again, they have a chance to be noticeably better.

The Cowboys are gonna surprise a lot of people, barring a repeat of the injuries they had last year. The DC was lousy the Cowboys addressed their problems on defense and the Buccaneers will find out first hand. They got way too much credit, if they had half the injuries the Cowboys had they wouldn’t have made the playoffs. Imagine the Bucs losing Tom Brady they would call it a lost season. Dak Prescott can go toe to toe with any team in the league with the weapons around him. If Zeke can’t get it going Pollard is more than capable of carrying the load and would be even more dangerous with a healthy offensive line. The defense will have some growing pains but will be just fine once thrown into the fire.

These Cowboys are going to make Quin a rich man! Nxt to Todd Bowles he is a fine defensive mind! He has ppl with pop he can employ D. Wilson will prove no questions for our secondary! Tampa will get the brunt of this up & coming defense! This line will bring back howls of the Doomsday Defense! Can’t wait till Oxnard! The pandemic killed us last year. Nolan was not right for me in the beginning. But he did have them showing up in the end! Get off Smith & Lve! They are going to be smash mouth!

Man I can’t wait to fold you cowgirls up like lawn chairs. Wonder what the excuse will be after this epic spanking. You may have gotten better but your forgetting how we jelled the last 8 games of last season and put a whoopin on the league. With all starters returning, being familiar with each other and being able to open the playbook up more than 40%, y’all must be crazy to think that y’all ain’t gonna get stomped. Here’s a harsh truth, we have smoked Quinn’s defense when we Shameless Winless. What do you think we’re going to do to that dumpster fire y’all call a secondary. It also looks like y’all forgot we were and still ate the number one run defense. Better keep Dan upright or it’s going to be a long night and a longer season. Yes Tally Ho mfers !!!

To B Hill
Just wait till your 44 yo qb goes down hard.
In week 1
Ha hahaha

To B Hill I don’t know what you’re on but Tom Brady is one hit away from retirement, The Cowboys are gonna be the team too make it happen. as far as that number one defense goes, you will find out when they face a healthy Cowboy team they ain’t all that. The receivers are gonna remind everybody who too respect and then the running game will feast on that garbage you call number1.