While you wouldn’t notice it judging off of how badly they dominated the Washington Football Team on Sunday, the Cowboys' depth behind the core group of linebackers was starting to get a little thin. Jabril Cox tore his ACL in the Cowboys Week 7 victory over the Minnesota Vikings, leaving Luke Gifford and Francis Bernard backing up Leighton Vander Esch, Micah Parsons, and Keanu Neal.

Unfortunately, it was announced earlier this week that Francis Bernard was being placed on the Reserve/COVID-19 List and will miss at least this Sunday's game against the Cardinals. Bernard hurt his hamstring in the preseason but returned to action in Week 9 and has since locked down a prominent special teams role while serving as a depth linebacker.

It was pretty well known that the Cowboys would be in the market to bring in some extra depth to bolster their LBs after it was announced Bernard would miss time, with Mike McCarthy all but confirming it earlier this week.

It didn’t take long for this to come to fruition, as they moved quickly in signing Linebacker Devante Bond to a practice squad deal on Wednesday. Bond is someone who should be able to step in and immediately fill Bernard's role if called upon, as the majority of his career snaps have come on special teams.

Bond checks in at 6-1 and 236 Lbs, and was a 6th round pick out of Oklahoma back in 2016. He spent his first two seasons in Tampa Bay before traveling north to sign with the Chicago Bears. Over 34 career games, Bond has logged a total of 482 snaps on Special Teams, along with an additional 384 defensive snaps.

Bond has 39 career tackles and has earned six total starts. His most productive year was his sophomore season back in Tampa Bay, where he started four games (appeared in eleven) and came away with 22 tackles and one quarterback hit.

While it’s possible we never see Devante Bond log meaningful snaps for the Cowboys, he should be more than prepared to fill in on special teams if it comes down to it. Besides, this season has shown us anything can happen and players can be forced out of games at a moment's notice, so it’s definitely better to have too much depth than too little. 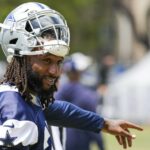