The Dallas Cowboys have suffered some tough blows to the interior offensive line in recent years. Will recent investments in the guard and center positions prove fruitful in 2022? We're hitting those spots next in our training camp preview series.

In an ideal world, Travis Frederick would still be an All-Pro center and Connor Williams would've been everything you'd wanted from a 2nd-round pick. Unfortunately, Frederick's health led to early retirement and Williams didn't show enough in four years to earn a second contract with Dallas.

Thankfully Zack Martin is still the NFL's gold standard at right guard; the centerpiece of the Cowboys' offensive line. The team needs Martin's greatness now more than ever with Terence Steele moving into the right tackle spot after La'el Collins' departure. They also need him to help his young compatriots in the interior.

Tyler Biadasz enters his third season with momentum, improving his play in the latter half of 2021 and keeping Dallas from making any significant move at center. While he will likely never reach the same heights as his predecessor, Biadasz just needs to be a stable, quality presence in the middle for this offense to function.

The big move this year was at left guard; Dallas spent their 1st-round pick in 2022 on Tulsa's Tyler Smith. While he may eventually replace Tyron Smith at left tackle, Tyler is expected to step into the starting guard job left behind by Connor Williams. So far the rookie has impressed everyone with his work ethic while preparing for his debut.

If Smith hits the ground running at guard and Biadasz blossoms in his third year, the Cowboys could present a much stronger front on offense than they have the last two years. As we know from 2014-2018, this team is never better than when its offensive line dominates the field.

We've already discussed the projected starters so let's look at the backups. Connor McGovern enters his fourth season with Dallas as the projected “swing” between guard and center. He got a shot as the starting LG last year and didn't perform, leading to Connor Williams getting the job back and then Dallas drafting Tyler Smith.

Even if McGovern impresses in camp it's hard to see him ousting Smith. The Cowboys want to give their 1st-round rookie all the work he can get to speed up his development and become an immediate contributor. Connor can still have value in the old Joe Looney role as the primary backup throughout the interior line, but it's hard to see him pushing for a starting job.

If anyone pushes for a larger role in 2022 it might be Matt Farniok. Last year's 7th-round pick was making noise last year and this summer as a contender at center. Farniok taking the starting job from Biadasz would be a stunner, but claiming the swing role away from McGovern is certainly not hard to fathom.

Undrafted rookie Alec Lindstrom is another intriguing name in this year's camp. His older brother Chris has been the Falcons' starting center for three years and Alec was considered a priority free agent from this year's class. He probably needs some physical development before he can compete in the pros but has talent and pedigree working for him.

Also in camp this year will be Braylon Jones and James Empey, currently listed as centers. Jones spent last year on Dallas' practice squad and Empey was a UDFA this year out of BYU. Both will have an uphill battle to make the 2022 roster based on the competition. 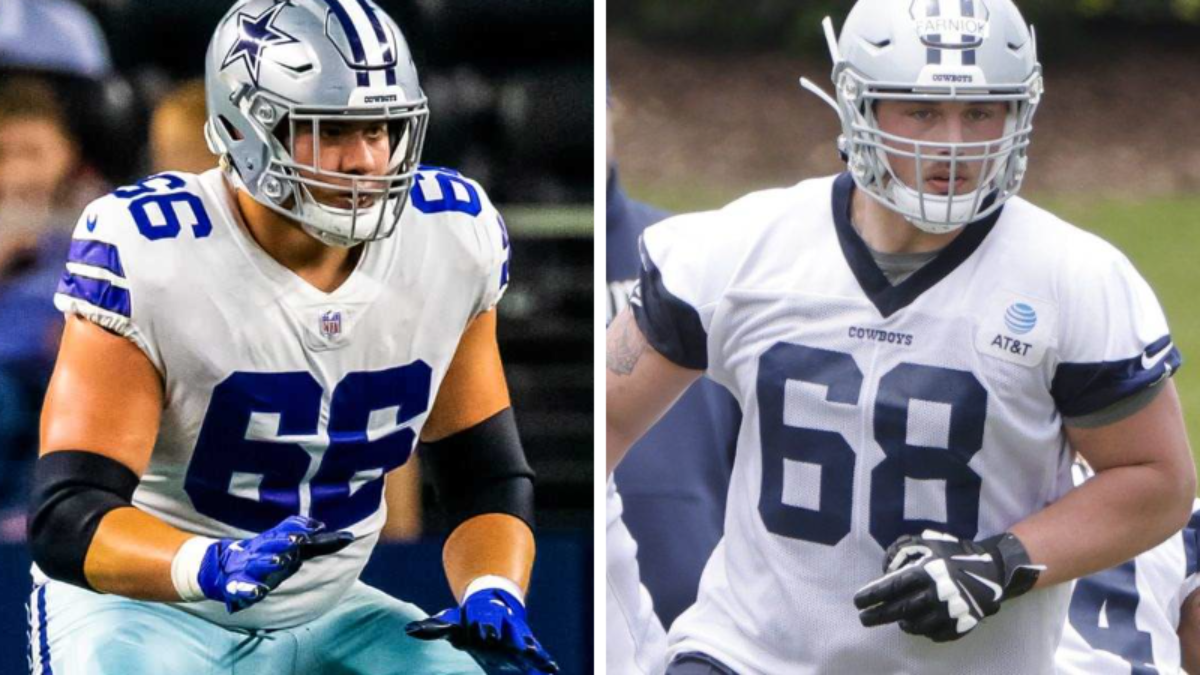 We just glanced over it but McGovern and Farniok should be the hottest battle at this position. While both could be competitive for starting jobs if either of the Tylers struggle, it's more likely that Connor and Matt will be fighting for the primary backup jobs.

There doesn't necessarily have to be a swing role here. It's entirely possible that McGovern will be the backup guard and Farniok the center. Versatility is nice, something that made Joe Looney especially valuable during his run, but it isn't a given. Both players could make the roster as the second name on their respective depth charts.

McGovern is not only up against a newer prospect but also the final year of his contract. He's due almost $2.8 million in his fourth season and Dallas can clear all but $221k of it if he doesn't make this year's roster.

That financial incentive could work in Farniok's favor. If the Cowboys feel the second-year lineman is comparable in talent and potential then they may make him the backup and save cap space by cutting or trading McGovern.

One surprising fact; despite having two extra years in the NFL McGovern is actually about a month-and-a-half younger than Farniok. So while we may think of Farniok as being the younger in NFL years, age-wise they're almost the same so that does help level the playing field in terms of perceived development potential.

Again, the loser of this potential battle doesn't necessarily lose a roster spot. Both could very well be on this year's team as the best depth options at each position.

But depending on the needs at other positions and how badly Dallas wants to shed cap spending, McGovern and Farniok may very well be fighting for the same job in 2022.

Jess Haynie
Cowboys fan since 1992, blogger since 2011. Bringing you the objectivity of an outside perspective with the passion of a die-hard fan. I love to talk to my readers, so please comment on any article and I'll be sure to respond!
Previous article
2022 Cowboys Season Preview: Who will Feast on Thanksgiving?
Next article
Week 1 Kickoff Countdown: Vinson Smith is the Greatest #57