The Dallas Cowboys are pretty set at linebacker with Jaylon Smith, Leighton Vander Esch, and Sean Lee. They added support in the trenches through the draft with Trysten Hill and Joe Jackson, but the back end needed some bodies also, which they found in the 5th and 6th rounds. Michael Jackson and Donovan Wilson could potentially be a late-round steals for Defensive Backs Coach and Passing Game Coordinator Kris Richard.

Jackson's ability to play on the outside near the hashes makes him another body Defensive Coordinator Rod Marinelli has in his back pocket. This in the event All-Pro Byron Jones or Chidobe Awuzie goes down. Jones is currently recovering from hip surgery he had in March, which will keep him out probably until the season opener. Awuzie has missed time with multiple hamstring injuries in 2017 and an ankle injury last season that forced him to miss one game. Jackson is very good at jamming receivers at the line of scrimmage. So much so, that he only allowed a completion percentage of 27.7 on go routes last season at Miami. Of course, the hope is that Jones and Awuzie stay healthy, but in the event, one should fall, Jackson could be a viable option.

He's also no stranger to playing in the slot. As we speak, Anthony Brown wears the crown at the position. Jourdan Lewis is behind him on the depth chart as he looks to finally find a role within this scheme. This could be Jackson's best chance to possibly see the field sooner than later. Although Brown is the starter he has been benched before due to lackluster play. The problem with Lewis is he lacks the size that Kris Richard typically likes in his corners/safeties, standing only 5'10. Jackson has a chance to make this particular position battle one to watch in training camp.

Finally, his size could make him a candidate to switch to safety. At 6'1 with long arms, this transition could be a smooth one if he can't find his footing at corner in the NFL. 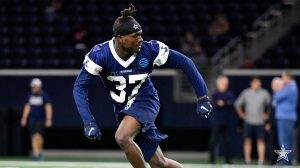 Donovan Wilson brings a multifaceted skill set of his own at safety.

He's another challenger at strong safety for current starter Jeff Heath. Heath has had shining moments here and there. Most notably, in the playoff loss to Green Bay in 2016, when he had two interceptions on one of the leagues best Aaron Rodgers. However, he's often a liability in coverage. Not to mention, he was one of the worst tackling safeties in the NFL in 2018. Wilson however, is known for being an excellent tackler and had eight career interceptions. What's also impressive about him is his 21.5 career tackles for loss in college. Himself, George Iloka and Kavon Frazier will battle to see who can possibly take the throne from Heath.

His resume doesn't stop there, though, he can also play nickel/slot corner. He spent two seasons playing nickel defensive back at Texas A&M where he totaled six of his eight career interceptions there. This flexibility gives added insurance behind Anthony Brown and Jourdan Lewis in case of injury to one or both.

Jackson and Wilson are picks that could deem to be very valuable going forward. Not only did the Cowboys add more youth to one of the youngest rosters in the NFL but each player provides depth at multiple positions. More importantly, they add competition in the secondary. In a league predicated towards offense, in particular, the passing game, having reliable players on the third level of your defense is key.

After failing to capitalize on drives in the first half, the Dallas Cowboys offense woke up and scored two touchdowns and a field goal...
Read more
Cowboys News

DaRon Bland has quickly risen from a late-round hopeful to one of the Dallas Cowboys' more trusted cornerbacks going into his rookie season. Even...
Read more

Heath is the worst starting safety in the nfc east, he can’t cover or tackle, anyone of these guy’s mentioned will be an upgrade,and on that play that sealed the loss to Rams, Jeff Heath was caught peeping in the backfield and let Goff one of the slowest qb’s in football scramble for a first down on 3rd down & 8, Heath has got to go.

After five yrs I decided I would just leave my previous work and it transformed my lifestyle… I proceeded doing a task on the net, for an association I saw online, for some hours per day, and I receive much more than I was able to on my old job… Very last check I acquired was 9 thousand dollars… Excellent thing about this is the fact I get more time for my friends and family. Find out, what it is about… tup6.com/el

I would move Heath back to his reserve role and have either Donovan Wilson or Iloka as the starter at SS. I’d move on from Frazier as well.

Frazier is a ball hawking, hard hitting machine, Heath is the weak link, so is Brown he never break up passes, & poor Heath can’t cover or tackle.