For the second time in three weeks, the Dallas Cowboys offense let them down, this time in a road loss to the Kansas City Chiefs. While the defense did their part against Patrick Mahomes and KC, the offense failed to score a touchdown in the 19-9 setback.

The Cowboys responded from a similar loss to the Broncos at home last week, beating the Falcons by 40 before this test against another AFC contender. They'll have an even shorter window to move on and right the ship at home vs. the Raiders on Thanksgiving. Returning Tyron Smith and potentially CeeDee Lamb goes a long way, as Smith didn't play on Sunday while Lamb was ruled out for the game with a concussion – missing the second half entirely.

Dak Prescott and the Cowboys passing game will still be without Amari Cooper on Thursday, and once again his presence was missed at the Chiefs. Whether it was lack of protection up front or separation downfield, the Cowboys have not found the stability Cooper provides without the veteran receiver on the field.

Before completely moving on from their third loss of the season, here are few other of my notes from Sunday's loss.

Osa Odighizuwa is not the answer for the Cowboys still dealing with the loss of Brent Urban at DT. Urban's loss left a void in the middle of the defense, most notably against the run. Justin Hamilton and Carlos Watkins stepped up against the Broncos, but the Chiefs interior OL handled the Cowboys rush well. The Chiefs were eager to work RB Clyde Edwards-Helaire back into their lineup for the first time since week five, and took advantage of the rookie Odighizuwa trying to hold up at 1T. Fellow rookie Chauncey Golston also got caught by the Chiefs misdirection and speed on the boundary trying to keep contain on a few plays.

Odighizuwa's best use is as another pass rusher, something the Cowboys generated against Mahomes off the edge with Micah Parsons and Dorance Armstrong. The team can look forward to the return of DeMarcus Lawrence and later Randy Gregory to get after opposing QBs, but will need the offense to take opponents out of their run game to play schematically how Dan Quinn would prefer. 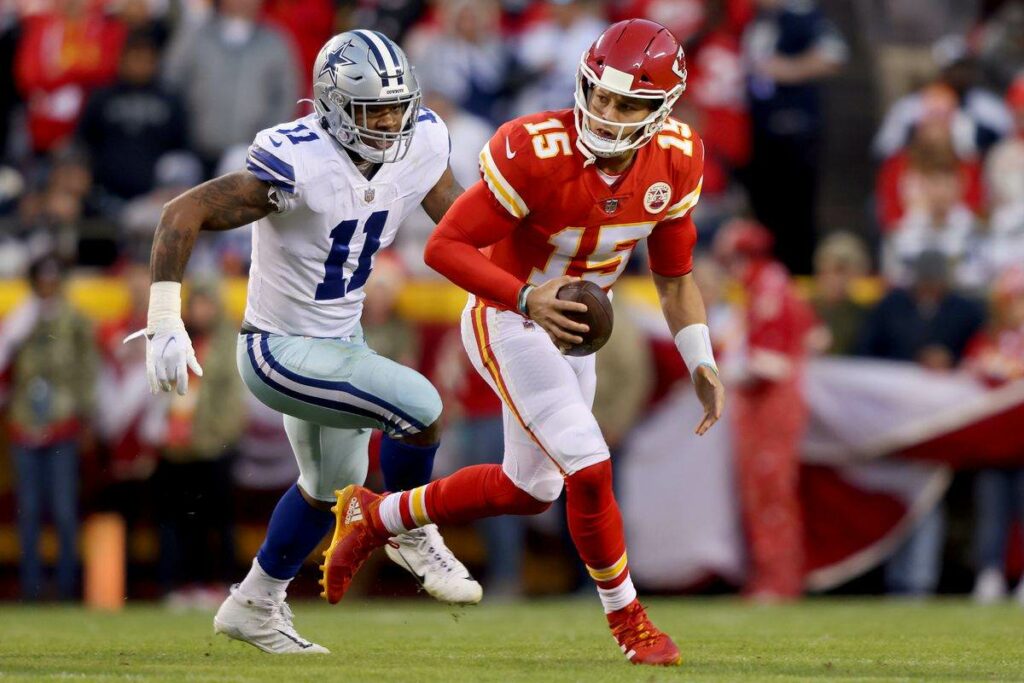 Micah Parsons' closing speed on his strip sack was one of the most impressive plays of the season for the DROY candidate. Parsons' instant impact on the Cowboys defense can't be understated, and it's the combination of mental processing speed paired with his quick twitch that allow him to make game-changing plays every week. Getting Mahomes on the run usually ends poorly for the defense, but on this play he couldn't account for the speed that Parsons closed on him to force the ball out.

Quinn and the Cowboys staff on this side of the ball deserve a lot of credit for changing Parsons' matchup based on the opponent, knowing he could take advantage of the Chiefs struggles at tackle. Reaching 17 MPH after beating the right tackle, Parsons has done a great job all season not allowing blockers to work into his frame, maintaining his ability to play fast.

Micah Parsons reached 17 mph on this play, according to @NextGenStats.
Seventeen! pic.twitter.com/gzObyWYJGp

Playing without Tyron Smith has always been a significant loss for the Cowboys, and I wonder how much it led to the lack of downfield passing. Kellen Moore's game plan focused on much more lateral passing than usual, allowing the Chiefs secondary to rally up and tackle – something they're much better at than sticking in man coverage throughout a down. The Cowboys also didn't test their linebackers in coverage enough, even with big-bodied receivers like Noah Brown and Malik Turner filling in for Cooper and Lamb.

The absence of Smith made the timing for the Cowboys switch to Connor McGovern at left guard even more difficult, as Chiefs DT Chris Jones wrecked the game rushing against McGovern, Tyler Biadasz, and even Zack Martin at right guard.

Trevon Diggs deserves an assist for his coverage on Travis Kelce that allowed Dorance Armstrong to get home for a sack. Armstrong has made the most of his increased snaps without Gregory in the lineup, and helped the Cowboys defense get off the field with a sack. Jayron Kearse dropped into coverage over the middle on this play, but Diggs still had to carry this crossing route by Kelce in man coverage. The sack created a potential turning point in the game, forcing the Chiefs into a 56-yard field goal attempt. A miss would have given the Cowboys good field position and a chance to get in the end zone down just ten, but it instead became the final score for Kansas City as their 19 points were more than enough.

It was a Chiefs blowout win at the Raiders that sent the league-wide signal they were back on track before the Cowboys came to town, and it's unfortunate this didn't play out as the meeting of conference contenders it could have been without injuries. The Raiders are now the next team the Cowboys will have to show their resolve against, coming in at 5-5 ranked 26th in PPG allowed.

Vegas has lost three straight and allowed 73 points in the last two weeks. The matchup is here for Dallas to potentially replicate their performance against Atlanta, but as the importance of each game increases and the Cowboys window to earn the NFC's top seed tightens, Mike McCarthy's team will need to turn the page very quickly from another big game shortcoming in week 11.

Knowing they held the Chiefs to their third lowest point output of the season, behind only the Titans and Packers (who suffered a similar low-scoring loss at Arrowhead) is a decent starting point to move on from – with help on the way for the Cowboys offense to find themselves again.

The NFL season may have recently ended, but the road to Super Bowl LVII begins once again over the coming months. Teams will be...
Read more
Game Notes

The Dallas Cowboys wanted to stay ready for the playoffs by playing most of their starters on Saturday night at the Eagles, and in...
Read more
Game Notes

Warm the Benches: Cowboys Pull Away Early, Dominate WFT in All 3 Phases 56-14

The Dallas Cowboys knew prior to taking the field for Sunday Night Football they'd clinched the NFC East, but were still out to prove themselves as...
Read more
Subscribe
Login