The NFL regular season is one of parity, and it took until week nine of the new 17 game schedule for many of the top teams to realize this. The Dallas Cowboys lost for the first time since week one, allowing a season high 190 rushing yards at home to a Broncos team that held a 30-0 lead well into the fourth quarter.

Instead of the Cowboys defense playing from ahead against offenses looking to match Dak Prescott and their usual high point outputs, the Broncos controlled this game from the start and were never discouraged from running right at Dallas.

This is something the Cowboys will have to quickly dispel as a long-term flaw that opponents can expose. Looking beyond the box score from this game should give the coaching staff and players hope the defensive lapses will be fixable as soon as the Atlanta Falcons enter AT&T Stadium on Sunday.

Against a historically bad Cowboys defense last season, the Falcons scored 39 points in an improbable loss the Cowboys stole as one of just two wins Dak Prescott captained before his injury. 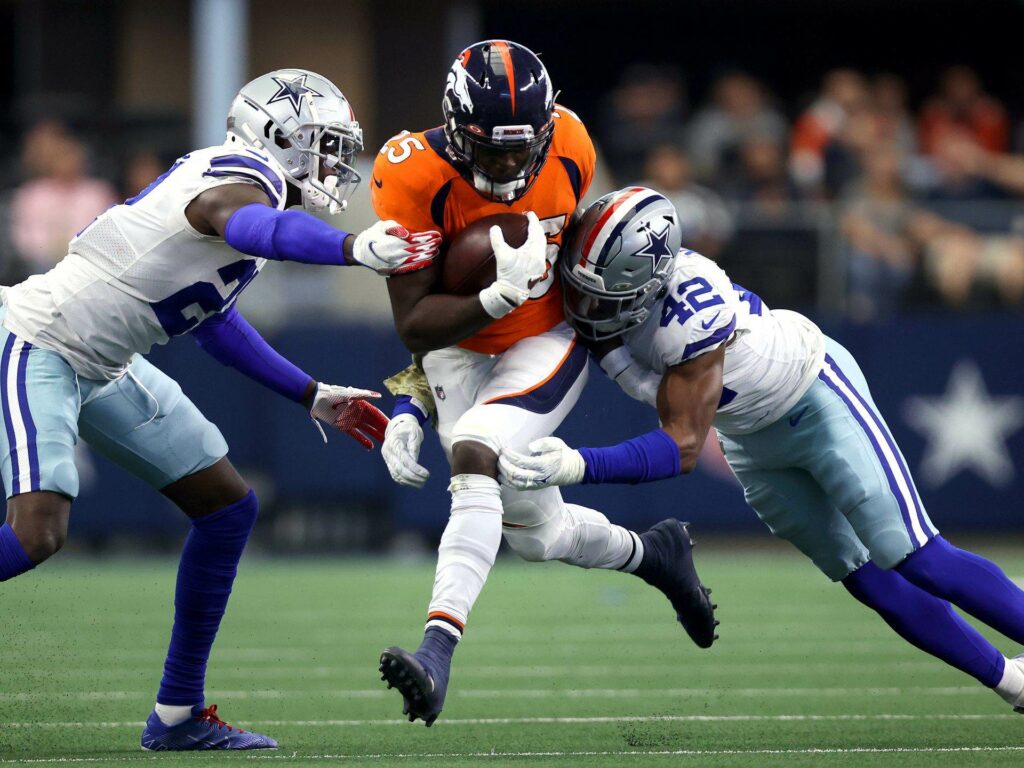 It's no coincidence the Cowboys allowed over 100 rushing yards for the third straight game in their second game without DT Brent Urban. Signed as a run-stuffing nose tackle, Urban filled this role well before being placed on IR with a triceps injury following the Patriots game.

Urban was averaging close to 40% of the team's snaps in Dan Quinn's defense, leaving the rest to Justin Hamilton and Carlos Watkins. Both tackles played their season high in snaps against the Broncos, with Watkins recording a sack.

Though the Cowboys missed Urban's ability to create upfield movement as he takes on blocks, Hamilton and Watkins help up well on the interior. The Cowboys inability to finish tackles or rally to the ball was the most glaring issue in run defense, something HC Mike McCarthy addressed early in the week.

Mike McCarthy: "The biggest thing on defense was our finish, and our pad level… we didn't get as many hits on the ball, our missed tackles were way up."

This rotation at the 1T position also allowed rookie Osa Odighizuwa to play another strong game in pass rush, where the Cowboys were consistently frustrated by Teddy Bridgewater's ability to extend plays. Quinn will have a decision to make on the outlook at DT in the coming weeks when it comes to playing the run vs. getting after the QB. Neville Gallimore and Trysten Hill could factor into the Cowboys rush along with DeMarcus Lawrence at a later date.

Scheming against his former team this week, Quinn has already proved this season the patented Cover 3 defense he implemented in Seattle and Atlanta is much more flexible now. One constant has been a strong interior pass rush, which the Cowboys can favor by simply getting their offense firing again.

Players like Hamilton, Watkins, and even rookie Quinton Bohanna will still be needed on early downs to stop the run. When Quinn can force opponents into obvious throwing situations, his pass rush personnel becomes much more versatile. Rookie Micah Parsons' best reps against the Broncos came as a rusher, but Denver attacked Jayron Kearse and Leighton Vander Esch at the second level for consistent gains.

The Falcons rank 27th in rushing attempts this season, mostly a factor of playing from behind. Winners of three of the last four, it's likely they test the Dallas run defense early, but have plenty of other ways to get the ball to top playmaker Cordarrelle Patterson.

With the Cowboys defensive front mostly holding their responsibilities against the Broncos, this game will be yet another test for the linebackers and secondary. Dallas has used Jourdan Lewis as an extra defensive back against pass-catching backs before, but will also have to deal with rookie sensation Kyle Pitts as a favorite target of Matt Ryan at tight end.

The position the Cowboys are getting the most help at with returning players off injuries is the defensive line, where numbers against Denver don't tell the full story. How they use this depth to make up for inefficiencies elsewhere could be the key to sustaining a defense that holds off the Giants and Eagles in the NFC East and is prepared for playoff football.