The Dallas Cowboys roster cutdown ahead of their season opener in Tampa Bay was mostly uneventful, with the team creating space via injured reserve and the COVID list. This didn't stop Tuesday night's Hard Knocks from building up drama for players that didn't make the cut following the preseason finale against the Jaguars.

As defensive line coach Aden Durde told his players in the show's open, “some people never play football after this”. This rang true for players that got plenty of air time like RB JaQuan Hardy, OT Isaac Alarcon, and QB Ben DiNucci.

All three offensive players were featured on last week's episode as well. Hardy's situation became the most interesting to follow after RB Rico Dowdle was placed on IR, creating an opportunity for Hardy to stick as Dallas' RB3. Hardy saw nine carries for 26 yards against the Jaguars.

The Cowboys opted for just Ezekiel Elliott and Tony Pollard on their final roster at RB, as well as Cooper Rush behind Dak Prescott at QB2. Hardy, DiNucci, and Alarcon were all waived. Elsewhere around the league Tuesday, quarterbacks like Cam Newton and Will Grier being released sparked interest from Cowboys Nation.

It's important to note the impact of COVID on signing free agents with the regular season looming, as Hard Knocks revealed what life was like for the Cowboys going virtual again after Dan Quinn and CeeDee Lamb's positive tests.

Even when the players returned to the building, they were separated for meetings. This didn't stop Joe Whitt from giving a passionate speech about effort on defense, something veteran LB Leighton Vander Esch complimented him for on the practice field. Whitt called the defensive plays for the Cowboys against Jacksonville.

Special teams coordinator Josh Fassel was not as big a fan of the Cowboys meeting via Zoom instead of in person. 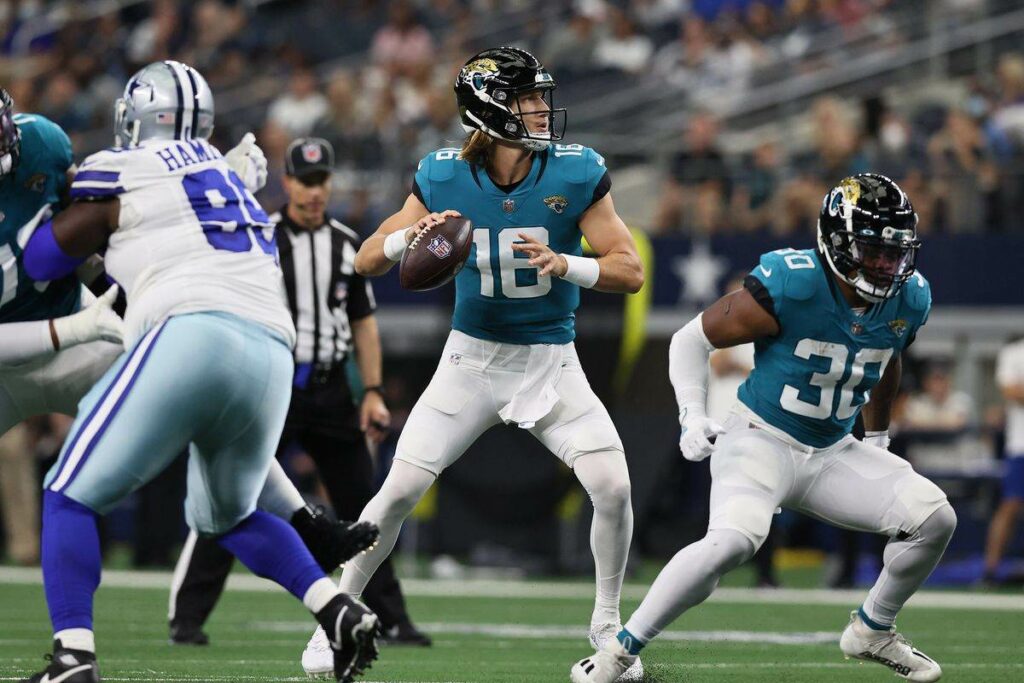 The Cowboys fourth preseason game played as expected when the Jaguars put out first and second team starters against Dallas' reserves. The 34-14 win for the road team didn't give Hard Knocks much to work with, though continuing to show the family connection in the stands for Alarcon and DE Azur Kamara was a highlight.

Kamara is still on the Cowboys roster, though the team will need space to return DTs Carlos Watkins and later Neville Gallimore to the active roster.

A lighthearted moment in this week's Hard Knocks came from the Cowboys QB room. After showing the QBs competing to throw the ball against a pylon, Dak Prescott pitched his “Prescott Pylon Game” and a new nickname emerged. For those still awaiting their fantasy football drafts, episode four of Hard Knocks may have inspired a new team name for Cowboys fans.

The season 16 finale of Hard Knocks airs on September 7th at 6:10 PM CT. This will be the last inside look HBO has on the 2021 Cowboys before they take the field for real two days later. Many starters that did not see a snap this preseason, or much time on camera, will be on the field when the Cowboys kickoff at the defending Super Bowl champions.

Hard knocks is pathetic! It turns players and coaches into idiots ! I guess they all have acting careers in mind later on! Just play the damned game and quit letting hbo make you into fools!